The war with Gaza has changed Israelis into a people who follow the combat and TV news nonstop, while spending sleepless nights of anguish and days of low economic productivity. 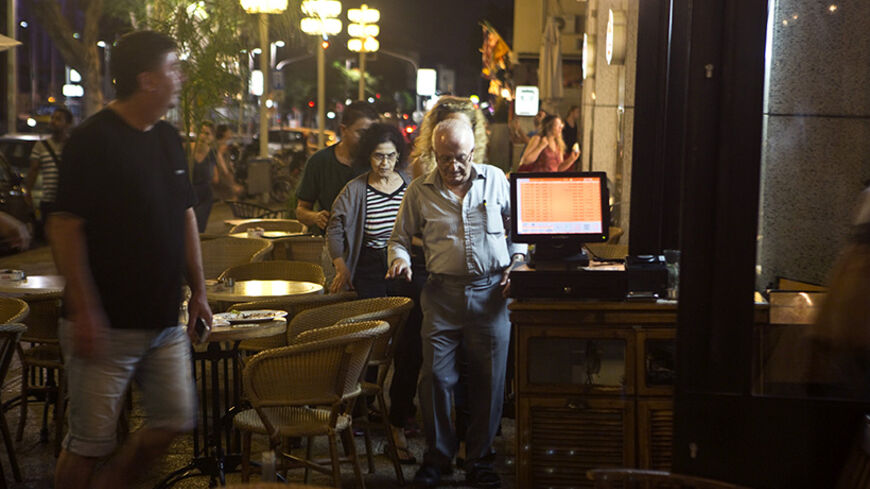 Diners go for shelter inside a restaurant as an air raid siren, warning of incoming rockets, sounds in a main street in Tel Aviv, July 11, 2014. - REUTERS/Nir Elias

I cannot recall a more deceiving reality in Israel. On the face of it, life goes on as usual. Yet it takes place in the shadow of war that dictates to Israelis a different way of life — one that is tense and fraught with dangers. The war in Gaza is about to enter its fourth week, extending beyond the limited time Israelis allot to wars. They have gotten used to short wars. Their two biggest wars — the 1967 Six-Day War and the 1973 Yom Kippur War — during which Israel was pitted against the entire Arab world, took less time.

Although this is a limited war between Israel and Hamas in the Gaza Strip, it has cornered Israel into a situation of stress, which is playing tricks on many Israelis who sway between normality and anti-normality. Take last weekend as an example: July 25 kicked off with sirens that paralyzed most of Israel’s cities. The streets emptied and many businesses closed their doors before the start of the Sabbath. During the evening hours, negotiations about a cease-fire between the two sides were held, culminating in a one-day humanitarian lull. The following Saturday morning, many Israelis ventured out of their homes to make the best of the hoped-for respite.

Restaurants opened their doors and thousands of patrons lined up to enjoy a day of quiet. The intercity roads, which had been abandoned for fear of rockets, were packed with vehicles. Many people toured the north of the country, and for the first time since the start of the fighting, the highway leading from Israel’s center to the north was jammed with cars. The Tel Aviv port, which had been deserted because of the fighting, was bursting at the seams. The restaurants along Tel-Aviv’s esplanade opened their doors to accommodate thousands of people. Bathers returned to the beaches, and in Jaffa’s port, the many shops that had been closed reopened for business.

The lull instilled a sense of normality in these crazy times. Empty public swimming pools became crammed with hundreds of kids who could not go in the water since the fighting began. “What a pleasure,” I was told by the guard at the entrance to the Goldstein-Goren public swimming pool in Tel-Aviv’s Shapira neighborhood. “I’m almost crying from emotion when I see so many kids happy to return to the pool. It was empty this whole past month. There was only water in the pool, no kids. It hurts me when they are locked up at home and the pool stays empty.”

And then, on the evening of July 26, the war in Gaza resumed. Once again, the sirens paralyzed Tel Aviv as well as Israel’s central plain and southern communities. Everything that had been opened closed its doors again. Many vacationers who were stranded in traffic quickly looked for shelter to get out of harm’s way. The metropolis, known around the world for being a nonstop party venue, fell into silence. Hardly anyone was seen on the streets, and only the sirens impaled the eerie silence. This was only one day, which demonstrates the strange duality of life here in the past month.

This war has led to a new and unknown behavioral phenomenon among Israelis. In no previous conflagration were TV channels such an integral part of the fighting as they are today. Three channels broadcast events in Gaza and its surroundings and events in the southern communities around the clock. Normal programming has been discontinued and entertainment programs were replaced by nonstop newscasts with military experts and pundits that come and go, explaining almost every movement on the battlefront. Every shell that’s fired is photographed and almost every rocket that’s launched from Gaza is captured on television screens. The interceptions of the Iron Dome missile defense system have become sort of a “cult.” Those who can, watch the interception with amazement, some taking pictures of the spectacular impact between Hamas rockets and the intercepting missiles, reminiscent of “Star Wars.”

“What you need to understand,” Carlo Strenger, a psychoanalyst, told Al-Monitor, “is that Israel is the size of New Jersey and although people stay indoors they can’t escape what’s going on around them, so they sit in front of the TV all day long to follow the war. If you don’t have a son or a friend or a relative fighting in the war, then you have friends that do. So everyone is living with the feeling that they must know what’s going on — who was killed and who was wounded. Maybe I know some of them.”

Strenger said that despite the country’s strength, Israelis still feel that their existence is uncertain. “There’s always something going on that calls their existence into question. And that’s why they can’t afford to live a normal life,” he said. According to him, the situation of Israelis reminds him of a typical Alfred Hitchcock movie, where in the middle of a quiet scene the viewers suddenly feel chills running down their spine. “Because of the creepy background music, you know there’s an impending disaster,” he said. “Let me tell you that there isn’t a single Israeli who doesn’t live without this background music. That’s why Israelis can’t get a good night’s sleep, even in times of calm, but especially at times of war.”

This is further compounded by a long-term Jewish memory that refuses to erase dark chapters of both distant and recent history. These only intensify the background noise of an existence under danger. Yehuda Bauer, one of the most prominent researchers of the Holocaust in Israel, described the new Israelis as a people living in a post-traumatic situation — because of the wars with the Arabs but especially because of the Holocaust. “It will take many years of quiet and peace to be able to determine that Israelis have been cured from their traumatic past,” he said at a gathering of the Israeli peace camp (organized by the One Voice NGO) at Rabin Square in Tel Aviv in 2012.