In their own words: IDF reservists on war, politics

Four IDF reserve soldiers speak to Al-Monitor about going to war as adults, with families to worry about and with more complex political and societal views than those of many young regular soldiers. 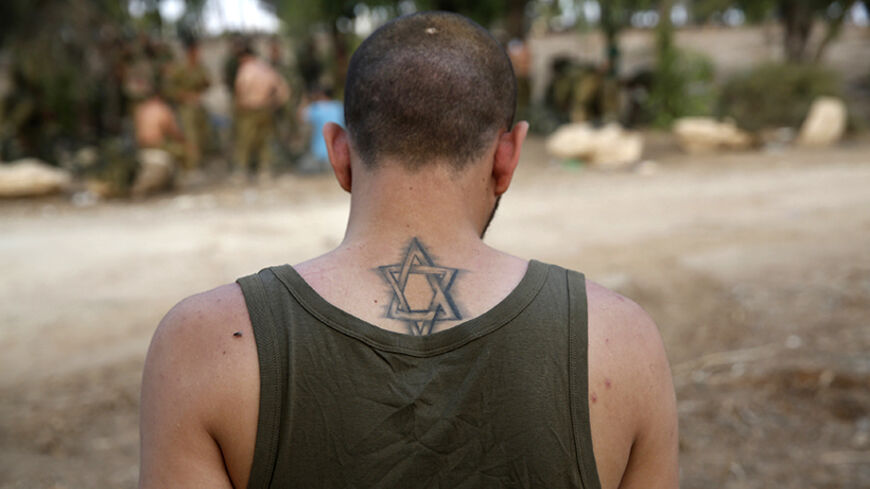 An Israeli soldier from the Nahal Brigade with a Star of David tattoo is seen after returning to Israel from Gaza, Aug. 5, 2014. - REUTERS/Baz Ratner

In the days before they got their emergency call-up notices, the fellows in Kobi Dahan’s Israel Defense Forces (IDF) company constantly contacted one another through their joint WhatsApp group and on Facebook. Dahan, a reserve soldier in a Givati Brigade infantry battalion, says, “From the first day of the Protective Edge operation, I drove my platoon commander crazy, asking him when, when will they call us? All the soldiers from the company kept insisting, and I’m sure the entire battalion, too. Everyone talked about it and waited for the call-up notice to arrive. When it finally arrived, everyone was happy.”

Dahan, 29, from the southern town of Netivot, is married and the father of a 2-month-old girl. He felt a true sense of mission: His battalion helps guard the localities in the Gaza Envelope area. As a resident of Israel’s south, Dahan feels that this is “a war over our home front, in every way possible.”

He adds, “We would have preferred to enter Gaza and do our best there, expressing our capabilities inside the Gaza Strip. But we do what we are told to do, and that’s no less important. There are people like me, who live in the south in towns such as Ofakim, Ashdod and Beer Sheva, who get hit by rockets; that’s their reality. And then they tell you to go and protect your own home front — that’s exactly what it is. To stop the shooting on your house, your family, your friends.”

Therefore, Dahan says, he was disappointed when a cease-fire was declared Aug. 5 and Israeli forces were pulled out of Gaza. “There were those who said that maybe it’s best to get out,” he said. “In the week and a half that the soldiers were inside, there were so many losses. But many of my friends in the company, and in the battalion too, were very disappointed. Once we’ve been called to reserve duty with an emergency call-up notice, we want to do the job properly –— go all the way in dealing with the rocket and tunnel threats.”

Nir Koren, 25, from Beer Sheva, is a reserve officer in the operations branch of the General Staff. He, too, had an emergency call-up notice. Unlike Dahan, Koren was not disappointed when the Israeli forces were withdrawn from Gaza. “I am definitely happy that it’s over,” he says. “Most of the reserve soldiers who served with me were eager for the campaign to end already, but there are also those who think otherwise. In the field itself, I assume that the general feeling is of frustration because even though we entered the Strip there wasn’t real fighting, just skirmishes and clashes.”

“The campaign was justified, but not efficacious,” claims Matan Sharon, 29, from Tel Aviv, a reserve soldier who served in a territorial brigade near Gaza and went home last week. “Our feeling was that the army isn’t really prepared to deal with the threat from Gaza,” he says.

Like many other reserve soldiers after military campaigns, Sharon feels that “The IDF treats manpower like a resource to be exploited and not as human beings, and this leads to lots of problems. Beyond this issue, we felt that on a practical level, the IDF didn’t know what to do about the tunnels. That raises the question of what did we do here in the first place. In effect, out of a month of fighting we had five days of activity and another 25 days when we simply waited for orders. That contributed to our sense of wasting time.”

Uri, 27, a reserve soldier in an elite unit, spent long days inside Gaza in the last month. He notes that, as far as he was concerned, this was one of the major difficulties. “More than anything else, this operation involved the psychological challenge of sharp transitions from a daily routine situation to a situation of combat. These are extreme transitions. In the regular army you are in a constant state of warfare; that’s your life. But after I didn’t do it for several years, it was hard to cope. Several times we were ready to enter on a ground operation, and they canceled it. Simultaneously, there were terrorist infiltrations when they dispatched us to the site of the event, close to the kibbutzim. The transition from ‘Good night, we’re going to sleep,’ to ‘Put on your uniforms, we’re going to war,’ was sharp and harsh.”

“You see the soldiers in the regular army and they look like kids to you,” says Sharon. “They are not really adults who can cope with the emotional state brought on by the war. Most if not all of them don’t understand anything about the trauma and emotional fallout that this causes them.”

“I do my reserve duty in the same place I did my regular army service,” says Koren, “and even then, I understood the significance of the job. Already then, I held the same views as I do now. Nothing substantive has changed, but I have a more critical perspective now. The experience of the Cast Lead and Pillar of Defense operations also had an effect and intensified the criticism, because you understand that we’ve ‘Been there, done that.’”

Uri says that the years that passed since regular army service changed the worldviews of his friends in the unit. He says that the difference between the regular soldiers and the reservists lies in the search for a permanent diplomatic solution. “In the reserves, you hear a lot more people saying that the conflict won’t be resolved without a diplomatic process. In other words, I waged the war that the state sent me to wage, now it’s the turn of the politicians to fight for a diplomatic process.”

For Dahan, the change is more personal. “Today, I live for three people; I have a family. I’m not a young soldier who only worries about himself and is only responsible for himself. I have to be an adult, responsible for myself and my environs. You have to take care of yourself also for the sake of your family.”

While the reserve soldiers donned their uniforms and protected the home front from inside and outside of the Gaza Strip, Israeli society experienced another type of war, a violent internal one. “Although we tried not to read the news, because we all understand the current situation and because morale is critical for us, I did hear about violence within Israeli society,” says Uri. “This situation is so problematic. When I put on my uniform, I set aside my political views. If you had asked me if I wanted to be a combatant, I would have said no. I am in favor of peace and against violence. But when a leftist calls soldiers ‘Nazis,’ I can’t call myself a left-winger. And when someone on the right says, ‘Death to Arabs,’ I can’t connect to that either. I've thought about that a lot since I returned. But what can I do, beyond serving my reserve duty, to change the situation?”

According to Dahan, the split in the nation is over priorities. “The leftists have the right to be leftists, that’s fine,” he says. “In a democratic country, they have the right to express their opinions. But what irritated so many people was the feeling that they focus more on what’s happening in Gaza. It seems that they really don’t care about the soldiers that were killed, the residents of the south who are hit by missiles and children who cry whenever they hear a door slam. It’s OK, do worry also about the children in Gaza. But first, worry about our children, our nation.”