Israeli media scholars Tamar Liebes and Zohar Kampf point to a dramatic change in the coverage of conflicts in the West: from focusing on politicians and generals to coverage of human stories of enemies and victims. 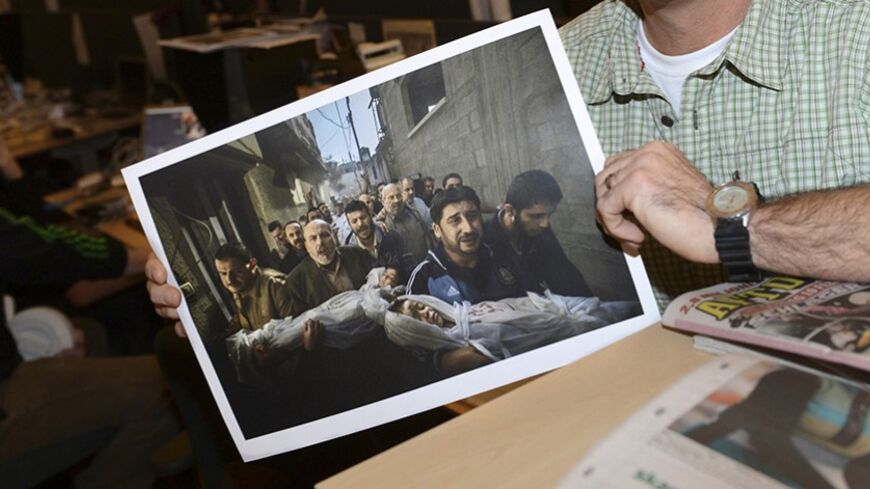 The photograph pictured shows a group of men carrying the bodies of two dead children who were killed in an Israeli missile strike on Gaza City on Nov. 12, 2012. It won the top World Press Photo in 2013. - REUTERS/Fredrik Sandberg/Scanpix

One of the most powerful media moments that has been etched in the consciousness of the Israeli public, from the days of Operation Cast Lead in Gaza in December 2008, was an especially sympathetic interview by Yonit Levi, the news anchor of Channel 2, with Ahmed Sanur, a welding shop owner in Gaza.

At the ruins of the welding shop, destroyed in the extensive bombings of the Israeli air force, Sanur spoke in an anguished voice about his son who was killed in the same attack. Levi, known for a meticulous and unemotional presenting style, didn’t succeed this time in remaining apathetic. She asked Sanur how he felt after losing his son, and if he had a message for the Israelis. Sanur sobbed and almost begged that the war would stop. At least a million Israelis watched this interview, hundreds of thousands of them, residents of the south, were besieged in shelters while under an unremitting onslaught of rockets and shells from Gaza.

Media scholars Tamar Liebes and Zohar Kampf of the Department of Communications at the Hebrew University argue that this interview could not have occurred 10 years earlier. This assertion is a result of a comprehensive study they have conducted in the last few years, in which they examined changing media coverage during periods of war and terror. According to them, the new style of coverage has grown new heroes, such as regular people from the other side of the conflict, and diminished the power of politicians, generals and news editors.

The research is detailed in their book, Transforming Media Coverage of Violent Conflicts, which was published in September. A book launch took place at the beginning of January, with the presence of former Prime Minister Ehud Olmert, a key figure in the Second Lebanon War. In a joint interview with Al-Monitor, they predict that the phenomenon will only grow, and will continue to change the center of gravity of coverage. In other words, if the first Gulf War had taken place today rather than in 1991, the heroes of news coverage then, the American Gen. Norman Schwarzkopf, and Israel Defense Forces (IDF) Spokesman Nachman Shai, would not have conquered the screen. 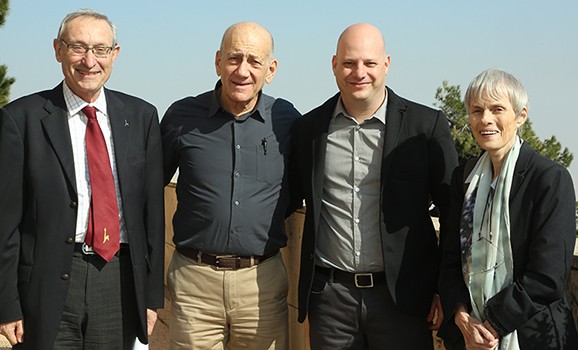 Al-Monitor:  In your book you mention the interview with Yonit Levi, but it doesn’t seem to have influenced the Israeli public, who didn’t change their positions regarding the conflict with the Palestinians.

Kampf:  At the bottom line, you’re right. But the interesting thing here is that the most-watched newscast in Israel in the midst of the operation in Gaza covered the other side, even sympathetically. In general, two central figures are remembered from the days of Operation Cast Lead, and surprisingly, they are Palestinians. The first is Ahmed Sanur, where after the interview with him angry viewers demanded that Levi be fired and signed a petition against her on the Internet that numbered 35,000 signatures at its height.

The second figure is Ezzeldeen Abu al-Aish, a doctor from Jebalia who lost his three daughters in an IDF strike. The event was covered live when al-Aish called Shlomi Eldar, who was then a news reporter for Channel 10, and cried for help on the phone. These are things we haven’t encountered in such force in the Israeli media in the midst of a war. It continued with Operation Pillar of Defense. We found 10 appearances of Palestinian civilians on Israeli media’s primetime broadcasts.

Al-Monitor:  When did it start?

Liebes:  Of course, it’s not only an Israeli phenomenon. We started our research in 2004, when we noticed that something changed in coverage of wars. In fact, we can point to 9/11 as the watershed. Until then, the media field was controlled by the generals, the political leaders and the news editors. They set the lines of coverage while ignoring the enemy.

We all remember Gen. Schwarzkopf and George H.W. Bush from the first Gulf War in 1991. After the 9/11 attack, something new started. It wasn’t only George W. Bush who ruled the screen. Suddenly CNN airs an interview with Osama bin Laden, and we find articles in Newsweek on Mohammed Atta — where the American media tried to explain what moves a man to carry out an attack that kills thousands. There were also empathetic interviews with mothers of terrorists, and they gave them headlines like “Everyone Has a Mother.” This has never happened before.

Kampf:  Actually, in a gradual process, figures who were previously considered marginal or illegitimate, like civilians, terrorists or enemy leaders, suddenly got a central role in the media, sometimes at the expense of the heroes who once ruled the media, like politicians, generals and news editors. The process started in the beginning of the 1990s and grew with the revolution in Internet media and social networks.

Al-Monitor:  What happened to the news editors in this process?

Liebes:  The marathon of live coverage of disasters, terrorist bombings or wars turned news editors into airport traffic controllers. They have no ability to catch up with the story, and so they only move from one point to another, and thus they have lost much of their power. In contrast, the reporters in the field become heroes when they bring the other side to light. In 2010, Stuart Ramsay of Sky News went on a special assignment and accompanied Taliban forces in Afghanistan as they buried mines against British forces who were supposed to pass in that area later. That is, a British journalist broadcasts a news article for British viewers where he accompanies the enemy. This was unusual.

Another example is the Tsarnaev brothers, the terrorists from Boston. The brother who remained alive was on the cover of Rolling Stone, with a very sympathetic article about what led a popular and promising kid like him to do a deed like this. The mother was also interviewed, and blamed the situation on the United States. It caused quite a storm there.

Al-Monitor:  What’s the significance of the diminished status of the old war heroes?

Liebes: The significance is the dramatic decrease in trust that the public places in these figures. In Israel, there’s an excellent example that illustrates these changes, from the Second Lebanon War, where [Hezbollah Secretary-General] Hassan Nasrallah turned into a central figure in this media coverage. This was unprecedented — when the north is under attack and the war is raging, that the enemy leader receives significant screen time in the central newscasts and threatens Israel and its leaders. We counted 10 times where Nasrallah was allowed to present his threats. What’s interesting in this context is that the chairman of Hezbollah turned into a very trustworthy figure in Israel: He would issue threats, and within minutes those threats were realized, which helped build his status as a hero. This was unprecedented. In contrast, the then commander-in-chief, Dan Halutz, or the political leadership, were not considered heroes — but the opposite.

Al-Monitor:  Is this a positive change in your opinion?

Kampf:  It’s positive in the sense that the new coverage expresses journalistic independence. Journalists today are more independent and allow themselves to interview the heads of Hamas and present their positions. The public is exposed in this period to soldiers’ moral violations and this could contribute to developing a moral stance.

Liebes:  But on the negative side, you could point to a decrease of trust in leaders, and that is because of so many stories and details; the viewer finds it difficult to grasp the big picture of the war and remains confused. There are a lot of little stories, but we lose the wider context, and there’s no one to organize it, because the status of the editor is weakened.

From the standpoint of decision-makers, such as prime ministers, it is much more difficult for them to maintain support and legitimacy for the war in the long term, and this could influence them to end the war quickly. The Second Lebanon War began with 90% supporting it, and within two weeks this support plunged by tens of percentage points.

Al-Monitor:  What is the effect on the Israeli public in all that relates to the conflict with the Palestinians?

Kampf:  In the second intifada, the Israeli public was exposed to complex pictures. Where in the first intifada only the anger and hatred of the Palestinian masses was broadcast, in the second intifada we were exposed to softer figures, such as the incident of Mohammed al-Durrah or the coverage of funerals in a way that was reserved only for Israeli grief in the past.

Al-Monitor:  Has this influenced the positions of Israelis?

Kampf:  I haven’t found unusual empathy among the Israeli public to the suffering of the other side because of the change in the type of coverage. This could be connected to the length of the conflict and to weariness of it, and that ultimately we see our own suffering first.