With the war nearing its end, Israeli media features the destruction of Gaza, not only in numbers but in images, exposing the Israeli public to the suffering of the Palestinians and to harsh criticism voiced by European leaders. 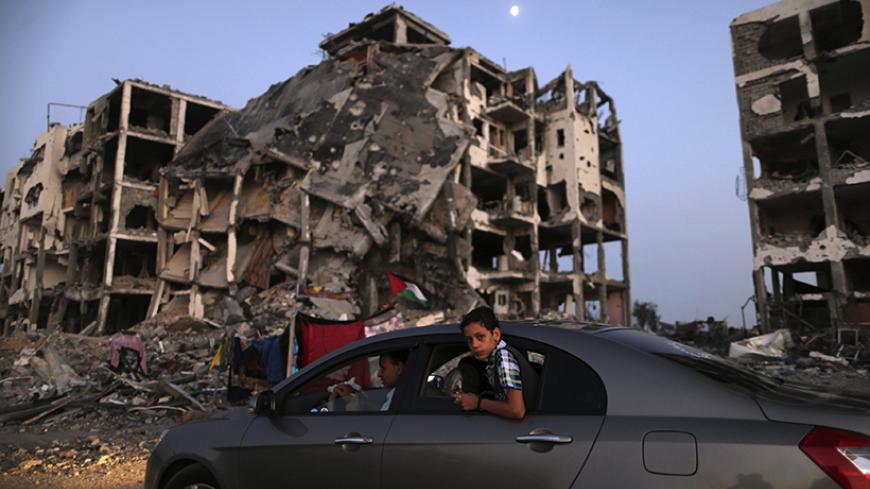 A Palestinian boy rides in a car driving past residential buildings in Beit Lahiya town in the northern Gaza Strip, Aug. 7, 2014. - REUTERS/Mohammed Salem

This war has been somewhat strange — a war whose conclusion is bearing little resemblance to its inception. The Israelis who followed the bloodstained battles in the Gaza Strip were forced to limit themselves to only one side of the conflict. The Israeli side, of course.

And as if according to that same script, the Israelis were informed that the war in Gaza had wall-to-wall international support. The United States is with us, the commentators reported in the days before the ground incursion, also Europe and many Arab countries, headed by Egypt. Almost the entire world is with us in the war against radical Islam in Gaza.

For three weeks, the Israeli media described what went on in Gaza in one voice, acting like the choir of the Red Army. Military commentators spoke on all the media outlets using almost the same words and images to describe the magnificent Israeli victory and the no-less magnificent defeat of Hamas. Almost all former upper-echelon officers appeared in one or other of the media studios to contribute their far-off military experience and words of wisdom to the music of the orchestra.

And then everything changed. Toward the end, the war underwent a surprising turnabout. It began with talk about an imminent cease-fire. Suddenly, Israelis were exposed to the magnitude of destruction in Gaza with an intensity they had not known before. The three main television stations, which had operated in the course of the warfare with one voice, started uncovering the other side of the war. The Palestinian losses that had been reported only in numbers, suddenly were given a face and a form. Palestinian grief filled the screens. Pictures of hospitals in Gaza that collapsed by the burden and overflow of the wounded and dead were featured. Palestinian neighborhoods reminiscent of devastation from other periods were featured. Time after time, the media screened the bodies of children who were killed for only one reason: They had the bad luck to be born and grow up in Gaza.

In addition to the focus on the Palestinian victims, other dissonant notes began to be heard, notes that had not been heard before. The news broadcasts reported increasing criticism on the part of heads of state, and especially from the president of France and his foreign minister who described what had occurred in Gaza as a “massacre.” What had originally seemed to be a defensive operation over our home front aroused condemnation from foreign leaders.

“To tell you the truth, I was surprised,” said Avner Azulay, a former high-ranking member of the Mossad, to Al-Monitor. “I kept switching channels to make sure what I was seeing. All at once, I was exposed to international criticism against Israel. Suddenly, there’s a confrontation of Bibi [Benjamin Netanyahu] with President [Barack] Obama, a confrontation with Secretary of State John Kerry, maybe sanctions of Spain against Israel and the threat of freezing arms export deals with Britain. The conclusion of the war is definitely different than its inception.”

All at once, things turned upside down. The Hamas movement, which was viewed as the mother of all sins in the Middle East, began to receive more balanced coverage. The Israeli public, fed on the knowledge that Hamas conspires to destroy Israel, is forced to hear that the hated Hamas and Islamic Jihad will assume a key role in the Cairo cease-fire talks between Israel and the Palestinians.

“I view the change in media coverage and especially the different tone as a natural phenomenon,” explains historian professor Eli Barnavi to Al-Monitor. “After all, it’s clear that after each war, people begin to ask questions. Where did we go wrong? Did we know that Hamas was building itself up? Did we know about the tunnels? Throughout the month of fighting, a more critical attitude toward the war emerged in Israel as well. I think that people are afraid of another war crimes account similar to the Goldstone Report that followed the Operation Cast Lead.”

According to Barnavi, the change in the tone of media coverage is also meant to prepare the Israelis for the possibility of a political arrangement with the Palestinians. “True, it is intolerable that sleeping children should die in war, but at the same time we revealed that President Mahmoud Abbas is part of the solution and not part of the problem. From this aspect, I emerge from the war with optimism, despite all the horrors there.”

The criticism against the destruction and multitude of losses in Gaza that has been proclaimed in recent days did not surprise Gadi Baltianski, executive director of the Geneva Initiative. As someone who served as a high-level diplomat in the Foreign Ministry, Baltianski is convinced that his former colleagues acted to lower the fire of criticism in the world. For example, they took action at the directive of their boss, Foreign Minister Avigdor Liberman.

“For four weeks of combat, Israel only looked at itself in the mirror,” Baltianski said to Al-Monitor. “Israel didn’t look in any other direction because nothing else interested it. Today, the reality looks different, and it is much harder than it seemed at the beginning of the war. I am sure that the Foreign Ministry people received harsh messages about the war, but they refrained from bringing them to the attention of the wide public. There had been an initial gap between public opinion in Europe and European diplomats, and this gap eventually closed. As soon as the diplomats internalized this, they expressed scathing criticism against Israel’s behavior in the war. The media was forced to report these voices, and this is the reason for the dramatic change in the attitude toward the war among the wide public.”

The criticism on the part of Israel’s staunchest friends, and the exposure of the tremendous damage in Gaza, are what generated the embarrassment felt by the wide public in light of the war’s results.

On Aug. 5, Channel 2 publicized the results of a poll on its news broadcast with regard to the question, "Did Israel win the war?" According to the poll, 42% answered in the affirmative, while 44% answered in the negative. This poll proves the extent of the dilemma faced by the public. In soccer terms, we would say that we reached a draw. The Israelis did not change their minds about the war’s urgency and many expressed their opinions that it was a necessary, inescapable conflict. It becomes clear to the Israelis that the government will conduct reconciliation talks with Hamas and Islamic Jihad — the very entities against which Israel had declared all-out hostilities. Yesterday they were sworn enemies, today they emerge as partners for mediated talks. Who would not be confused when things turn upside down like this in such a short time period?