Al Jazeera's interviews with Israeli spokespeople are nothing more than a fig leaf, as its coverage of the conflict is far from neutral. 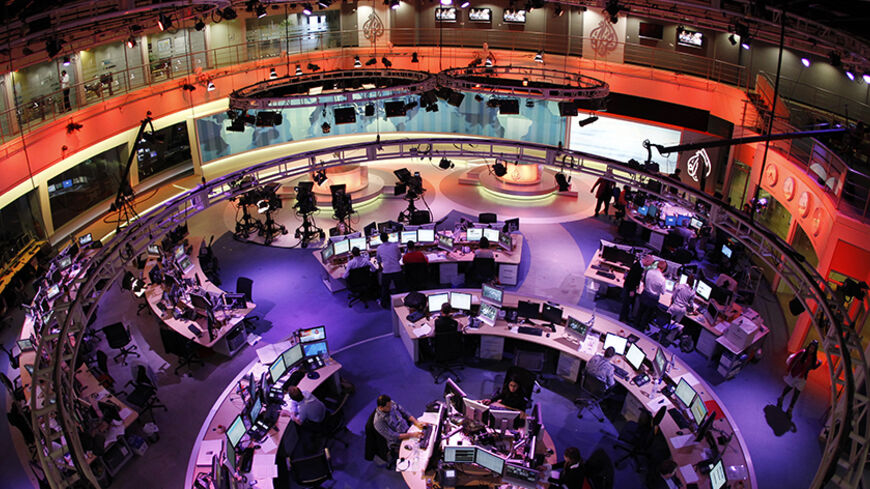 A general view shows the newsroom at the headquarters of the Qatar-based Al Jazeera English-language channel in Doha, Feb. 7, 2011. - REUTERS/ Fadi Al-Assaad

On July 22, Maj. Gen. Yoav Mordechai, Israeli coordinator of government activities in the territories and former spokesman for the Israel Defense Forces (IDF), sat for an interview on Al Jazeera's Arabic channel. Mordechai had been invited to the network's Tel Aviv studios by virtue of his fluency in Arabic, which he mastered at university during his studies for a bachelor of arts degree. His fluency, however, was merely a pretext cited by the network for an interview in uniform. Actually, the interview was designed to demonstrate that the network was true to the motto it adopted nearly 20 years ago — “The opinion, and the other opinion.”

Two decades, thousands of hours of live broadcasts and “a new Middle East” have shown that Al Jazeera not only cheers on revolutions, but also covers radical Islamic movements in the turbulent Middle East with sympathy and empathy. It began with its exclusive releases of al-Qaeda videos back in the days of Osama bin Laden and was subsequently manifest in its unqualified support for the Muslim Brotherhood in Egypt, as well as in its backing of Hamas in Gaza – and this, not for the first time.

Its support of Hamas was especially notable during the coup staged by the movement's military wing in Gaza in June 2007 and the ensuing violent expulsion of Fatah activists. The network’s correspondents in Gaza and its newscasters in Qatar have not criticized the perpetrators of the Gaza coup or the rule of fear established there by Hamas. The editorial line of Al Jazeera on the Palestinian issue has been clear and transparent. It has been and still is hostile to the Palestinian Authority of President Mahmoud Abbas in the West Bank and favors Hamas in the Gaza Strip.

Hence, the tone of the network’s broadcasts throughout the military operation in Gaza should have come as no surprise to anyone. Nevertheless, for some reason or another, the coordinator of government activities in the territories, as well as other Israeli spokespeople, on behalf of the Ministry of Foreign Affairs (the English-speaking spokespeople appeared on Al Jazeera's international broadcasts), decided for some reason to accept the network's invitation. Perhaps, they figured, or hoped, that they would be able to convince its anchors and the tens of millions of its viewers that Hamas is the bad guy in the conflict. The interview went as follows.

At the outset, the interviewer attacked Mordechai: "Mr. Mordechai, you must be aware that you are appearing on a broadcast network labeled by your foreign minister [Avigdor Liberman] as 'a terrorist branch.' How, then, do you expect this interview to affect you?"

The coordinator of government activities in the territories ignored the provocation and tried to explain how the IDF was coping with Hamas in Gaza, which was building tunnels, taking cover among civilians in overcrowded neighborhoods and stashing weapons in refugee camps. Mordechai said, “We have even found a mosque full of ammunition, and this, in the month of Ramadan.”

His interviewer was not impressed, stating, “Mr. Mordechai, everybody in Gaza, journalists and [welfare] organization officials — they all say that in your attacks you are deliberately aiming at civilians.” Running in the background, on a separate part of the screen, were photos from Gaza showing the bodies of Palestinians killed in the IDF attacks. A collection of war images. Needless to say, none of the rockets fired into Israel featured on-screen during the interview with the Israeli officer.

“Ours is a moral army,” Mordechai attempted to interject between her questions. He noted that Israel was doing its best to keep away from civilians, who were forced to serve as human shields for Hamas. To this, the interviewer remarked, “A moral army? Really? Well, you have to admit that the Palestinian resistance in Gaza has come as a surprise to you, that you cannot subdue them, that they are stronger than you, that even after 16 days [of fighting], you have failed to stop the rockets. It is quite clear that you were taken by surprise.”

The look of self-satisfaction on her face was unmistakable. Apparently, she had received compliments through her headphones from someone in the control room in Doha, applauding her for the “scathing interview” she was conducting with the Israeli officer.

Maj. Gen. Mordechai, an able and esteemed officer and former spokesman, should have known better. He should have realized that the Qatari network sought to use the interview with him as a cover, as a kind of fig leaf of respectability for its broadcasts, which have for long failed to impartially present the other side’s position. It is the Qatari emir, currently Sheikh Tamim bin Hamad Al Thani, who sets the tone, molding the Qatari TV network in his image. The emir backs the rebels in Syria, the Muslim Brotherhood in Egypt, Ennahda in Tunisia and, also, Hamas in Gaza. This is common knowledge. It is no secret.

Viewers watching nothing but broadcasts of Al Jazeera in Arabic might be misled into believing that Israel has embarked on a military operation in the Gaza Strip out of the blue, for no good reason, and that the Israeli army launched an attack against Hamas targets there just to satisfy the whims of its leaders. Likewise, the devoted viewers of Al Jazeera might have no idea that for 17 days now, Hamas has been firing hundreds of rockets at Israel's civilian population centers. In fact, had it not been for the Iron Dome air defense system, dozens or perhaps even hundreds of residents of Israel would have been injured. The viewers of the network's Arabic channel cannot imagine what every news consumer in the world knows – that Hamas has sacrificed Gaza residents, leaving them defenseless and destitute, for the sole purpose of promoting its goals and guaranteeing the survivability of its own leaders.

I am by no means trying to exonerate Israel for its responsibility for the circumstances of Gaza's inhabitants following the suffocating siege imposed on them since Hamas seized power there. There are, however, two sides to every coin. While lashing out against Israel over its closure policy, Al Jazeera has never provided data or released reports about the rule of fear imposed by Hamas on Gaza for years.

How could it possibly be that no Al Jazeera presenter — and, mind you, there are quite a few assertive presenters there who do not hesitate to boldly voice their opinion on a variety of issues — has ever wondered aloud why more than a million and a half Gazans suffered under the siege, stricken by poverty and scarcity, while Hamas was stockpiling thousands of rockets, building an army of recruits and investing massive resources in digging tunnels, but never bothering to do anything about the welfare of its citizens?

The newscasters in the Doha studio have not hidden their admiration for the capacity of the “muqawama” (resistance) to reach deep into Israel. At the same time, they have failed to explain to their viewers that the rockets fired at civilian targets are the root cause of the plight of Gaza. Al Jazeera has never let its viewers know that the harm inflicted on the residents of Gaza is the direct outcome of the actions of Hamas, which turned residential neighborhoods, schools and hospitals into military war zones, weapons arsenals and camouflaged rocket-launching sites. Al Jazeera has allied with Hamas and, in turn, Hamas has welcomed and adopted its messages.

Another example of the bond between Al Jazeera and the Hamas leadership and spokespeople was provided by a single, nonetheless characteristic event leaked to the world. A still photo taken by Wall Street Journal correspondent Nick Casey shows an improvised broadcasting studio set up by Al Jazeera inside Gaza's al-Shifa Hospital. Hamas spokesman Mushir al-Masri is seen in the image sitting in a chair against the backdrop of a large poster of bombed out ruins in Gaza. Viewers remained unaware that the interview was taking place in a hospital rather than the network’s studios. This provides further proof of the IDF's claim that the leaders of the movement are taking cover on the premises of the hospital.

In light of the Qatari TV network's obvious tone, Foreign Minister Avigdor Liberman proposed closing its offices in Israel, just as the Egyptian regime had done when it sought to punish Al Jazeera for its sympathetic coverage of the Muslim Brotherhood during the revolution.

Israel, however, is no Egypt. The freedom of expression is a sacred value in Israel — one of its fundamental principles – even though attitudes toward the opinions of others during the military operation have become violent and dangerous. It would be a mistake to close the Tel Aviv offices of the network, as such a move cannot be expected to balance its broadcasts and would not enhance the image of Israel in the world. Be that as it may, Israeli official spokespeople, the IDF and Foreign Ministry representatives, should realize that Al Jazeera is not going to change its skin and will not give them the time required to contribute to a balanced position. Instead, it will cynically use them to strengthen its own arguments.

In recent years, Al Jazeera has become a biased, tone-setting network, rather than a regular broadcasting network. The emir has so proclaimed it.