In an effort to repair the damage to his image caused by the Temple Mount crisis, Israeli Prime Minister Benjamin Netanyahu announced that he will attempt to shut down Al Jazeera's Israel bureau, again. 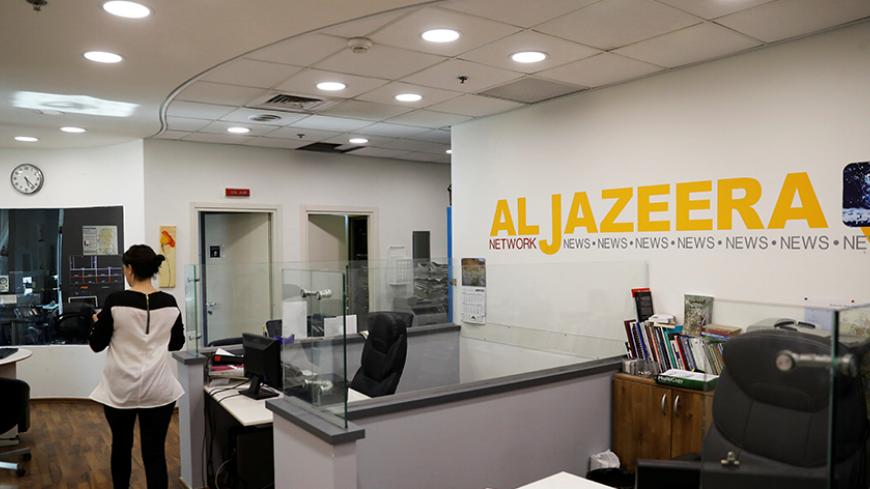 An employee is seen in the offices of Qatar-based Al-Jazeera network in Jerusalem, June 13, 2017. - REUTERS/Ronen Zvulun

Israeli Prime Minister Benjamin Netanyahu used his official Facebook page July 26 to announce that he is taking steps to shut down Al Jazeera's Israel bureau. He claimed that the news agency "continues to incite violence around the Temple Mount," and that he "appealed to law enforcement agencies several times to close Al Jazeera's office in Jerusalem. If this is not possible because of legal interpretation, I am going to seek to have the necessary legislation adopted to expel Al Jazeera from Israel."

Al Jazeera's offices in Israel are located in Jerusalem. During the crisis surrounding the Temple Mount, representatives of the Israel Defense Forces' (IDF) spokesperson's unit approached the network on several occasions, asking it to allow Israeli representatives to appear on air, in an attempt to restore calm. One of the people interviewed was the Coordinator of Government Activities in the Territories (COGAT), Maj. Gen. Yoav Mordechai. He was invited to the network's studios after the July 21 terrorist attack in the West Bank settlement of Halamish, in which three members of the Salomon family were assassinated. In the interview, Mordechai said that Israel was prepared to look into alternative solutions to replace the metal detectors on the Temple Mount, while still preventing terrorist attacks, like the one on July 14, in which two police officers were killed. This was part of a larger attempt to stop the wave of violence, which erupted after Israel introduced new security measures at the site.

Another frequent visitor to the Al Jazeera studios is the head of the Arabic-language department of the IDF spokesperson's unit, Maj. Avichai Edri. A representative of the network in Ramallah, the West Bank, who spoke to Al-Monitor on condition of anonymity, said that the requests by Israeli representatives to appear on air throughout the crisis sounded to him like distress signals. He said that the network granted airtime to Israel's official representatives for professional, journalistic reasons, but also to provide Israel with a platform to relay the message that it is not planning to change the status quo on the Temple Mount.

Nevertheless, anyone who watched the network's live reports from Israel and the West Bank over the last few days inevitably came away with the impression that Al Jazeera's reporters did goad Palestinians to demonstrate. Its reporters relayed the message that Israel was acting unilaterally at Al-Aqsa Mosque, while its reports failed to note that the metal detectors were installed in response to the July 14 terrorist attack there.

Netanyahu is not the only world leader who deems the Qatari network — the most important news network in the Arab world — to be hostile. In 2014, after the rise and removal from power of the Muslim Brotherhood, Egypt's military government declared war on its broadcasts. In June, Jordan and Saudi Arabia shut down the network's local offices as part of a larger boycott of Qatar. Kuwait, Egypt, Saudi Arabia, Bahrain and the United Arab Emirates all declared a boycott on Qatar recently, claiming that the country supports terrorist organizations and radical Islamic movements. They also issued an ultimatum to Qatar, insisting that it shut down the network.

In the West Bank, too, attitudes toward Al Jazeera are complicated and sensitive. On more than one occasion, senior Palestinian officials have accused the network of supporting Hamas. On the other hand, because of the enormous power wielded by the most-watched network in the Arab world, those same officials have no choice but to maintain a correct working relationship with it.

Netanyahu's demand that the Al Jazeera bureau in Israel is shut down is not unusual; he is joining a long list of heads of Sunni Arab states throughout the Middle East who feel that Al Jazeera's broadcasts pose a threat to their regimes. But is it the right step, as far as Netanyahu is concerned? Knesset member Nachman Shai (Zionist Camp), a former IDF spokesman and author of the book "Media War: Reaching for Hearts and Minds," told Al-Monitor that the prime minister's decision was intended to strengthen his standing among the right.

Shai said, "[Netanyahu] said that terrorists should be executed, and in the same breath he announced that he will expand the boundaries of Jerusalem and create separate Arab municipal councils [for Palestinian villages close to Jerusalem]. Then as part of all these decisions — intended to appease the right — Netanyahu announced that he plans to shut down Al Jazeera. There is only one way to shut the network down, and that is by proving that it really did violate the law. That can only be determined in court."

According to Shai, on a personal level, he avoids giving interviews to Al Jazeera, so as not to grant legitimacy to its broadcasts. At the same time, however, he pointed out that closing its Jerusalem offices would not change its attitude toward Israel.

Brig. Gen. (Res.) Hanan Gefen, who once headed the IDF's elite intelligence unit 8200, also believes that it would be a mistake to carry out Netanyahu's threats. In an opinion piece that appeared on the Israel Defense website, he wrote, "After spending a long time tracking the network's broadcasts, I know that Al Jazeera's audience in the Arab states benefits from a balanced picture of what happens in the State of Israel, complete with responses from Israeli spokesmen, accurate quoting of the Israeli media and spokesmen, and the use of nonaggressive language insofar as possible." More generally, he said that negative coverage of Israel by the network is marginal.

The civil administration also believes that the shutting down of Al Jazeera's offices would not be a wise move. It is only natural that Mordechai avoided speaking out against Netanyahu's proposal, but a COGAT source told Al-Monitor on condition of anonymity, "The dialogue with the Arab world — through the most prominent media platform in the Arab world — would be cast into oblivion. That would be a mistake. It would be impossible to find a suitable alternative."

And so, even if Netanyahu does want to bolster his status on the right, the relationship between Israel and Al Jazeera is too important to make rash decisions about it based on unrelated issues.