Is Israeli Prime Minister Benjamin Netanyahu letting the Temple Mount crisis simmer to deflect attention from the scandals swirling around him? 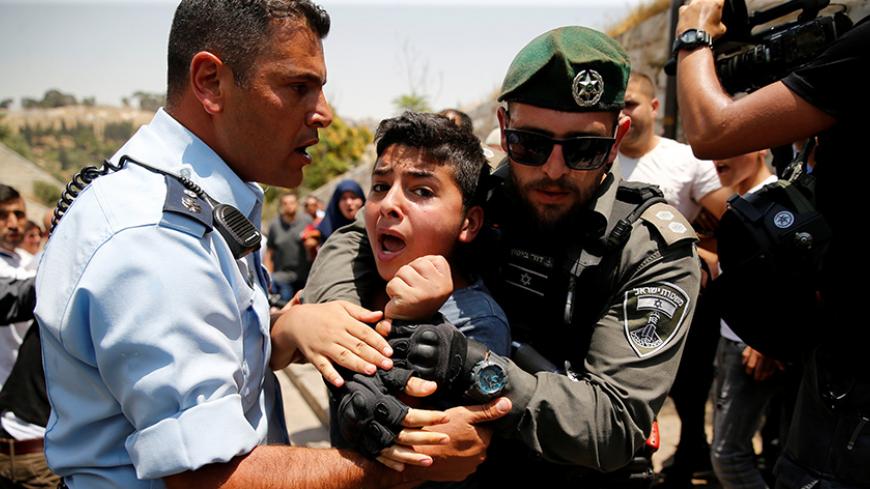 A Palestinian youth is detained by Israel Border Police during scuffles that erupted after Palestinians held prayers outside Jerusalem's Old City to protest the installation of metal detectors at the entrance to the Haram al-Sharif/Temple Mount, July 17, 2017. - REUTERS/Ammar Awad

A Jordanian citizen used a screwdriver to attack a security guard July 23 at the Israeli Embassy in Amman. The guard shot and killed him. Another Jordanian was killed as well, hit by a stray bullet. Two days earlier, Omar al-Abed, a Palestinian from Kubar, penetrated the adjacent Israeli settlement of Halamish, entered a home, and stabbed and killed a grandfather and his adult son and daughter. Five children hid in a second-floor room until a neighbor arrived and shot the intruder. That same day, four Palestinians were killed in rioting over the Temple Mount, known as Haram al-Sharif to Muslims. East Jerusalem and the rest of the West Bank had reached a boiling point. For the first time in a long time, hundreds of Palestinians took to the streets to demonstrate and vent their rage at the symbols of Israeli rule.

All of this stems from the metal detectors installed at the entrance to the Haram al-Sharif compound after the July 14 terrorist attack there. After two years of hard work, Israel had suppressed a wave of knife and other individual attacks that began in September 2015. The ensuing quiet was erased in a week.

The current round of violence lacks two major restraining factors that usually tend to lower the flames. The first is a responsible and energetic US administration familiar with the situation and reacting to such circumstances from almost the first moment by mediating between the parties. The second is Prime Minister Benjamin Netanyahu.

One question asked with increasing frequency is whether Netanyahu is intentionally delaying the removal of the metal detectors in an effort to sustain tensions and divert Israeli public and media attention from the wave of police investigations into his affairs. On July 20, Miki Ganor, who served as the intermediary between Israel and the German's Thyssenkrupp for a sale of submarines, signed a deal and turned into a state witness in one of the investigations. A vociferous public outcry is expected during the impending parade of defendants and others incriminated by his testimony. There is not yet any indication that Netanyahu will be implicated, but his most intimate confidants, including attorney David Shimron, are in up to their necks.

Is it possible that Netanyahu has lost his moderate edge and his aversion to security adventurism because, among other things, he feels under siege by the investigations? The situation is complicated, and opinions are divided.

One component playing a major role in Netanyahu moving ever further right on issues pertaining to the Temple Mount is competition among the Israeli right over Knesset seats and popularity. Netanyahu is trapped by HaBayit HaYehudi head Naftali Bennett and by many of his own Likud ministers, who are calling for him not to concede. They insist that he leave the metal detectors in place.

Netanyahu tries never to allow Bennett to position himself to his right under any circumstances, but this makes it hard for him to be decisive. The decision to install the metal detectors was rushed, made right before Netanyahu flew to Paris July 15, and without Cabinet discussion and without bringing the Israel Defense Forces (IDF) and Shin Bet into the picture. Had Netanyahu listened to Shin Bet or the military, he might well have heard that installing the detectors could reignite the individual intifada and unite the Arab and Islamic world in support of the Palestinians, which had not happened in a very long time. Netanyahu did not consult with them, and that is exactly what he got.

The IDF reports that the level of aggressive posts on social networks is unlike anything they have seen in years. The two greatest nemeses in the region, Palestinian President Mahmoud Abbas and Hamas' political bureau chief Ismail Haniyeh, were pushed into each other's arms. Turkish President Recep Tayyip Erdogan was quick to join the party, and huge demonstrations took place in Jordan, where the Muslim Brotherhood is strong.

The Israeli Cabinet met on the night of July 23-24 in an effort to avoid serious public repercussions. That is also when the attack in Jordan occurred. The story is becoming reminiscent of Mossad's 1997 botched assassination plot against Hamas' political bureau chief Khaled Meshaal in Jordan. Once it was uncovered, the new prime minister, Netanyahu, was forced to save Meshaal's life, release Hamas founder Sheikh Ahmed Yassin from prison and plead with King Hussein of Jordan to forgive him.

It is quite possible that the current incident will help Netanyahu get off his high horse with some sort of deal along the lines of the Israeli security guard in exchange for the metal detectors. Meanwhile, the embassy staff in Amman is under siege. The Jordanians want to interrogate the guard, but the Israelis are refusing. Abbas has announced the cessation of security coordination with Israel, and throngs of Palestinians gather for prayers every evening at the Lion's Gate, outside the Temple Mount compound, while violent demonstrations take place elsewhere.

Adding to all these problems is the emerging tension between Israel's defense establishment and the political leadership. In all matters pertaining to the Temple Mount, Netanyahu has deferred to advice from the police, ignoring the security establishment. The problem is that the police lack a broad perspective. They are less involved in what is taking place in the West Bank, less interested in the geopolitical situation. Netanyahu now finds himself pitted against the IDF and Shin Bet.

Two years of laborious work, which is being studied in the West, has been cast into oblivion. The IDF and Shin Bet developed a series of algorithms to patrol social networks and identify potential attacks with a very high degree of certainty. Vast resources and effort were invested on the ground as well, in creative, sometimes circuitous ways. Under the leadership of the IDF chief of staff, Maj. Gen. Gadi Eizenkot, and Defense Ministers Moshe Ya'alon and Avigdor Liberman, Israel was able to keep most of the Palestinian population out of the conflict without affecting their quality of life, freedom of movement or ability to obtain the necessary permits to work in Israel. This led to victory over the intifada of individuals. It is also why it is so frustrating to see it all erased by the current eruption of violence.

About an hour and 40 minutes before the Halamish attack, Abed posted his last will and testament on his Facebook page along with notification of his impending attack. In theory, Israel's security forces should have quickly targeted the post. The IDF and Shin Bet should have caught Abed before he had a chance to vent his rage. The smart, sophisticated systems developed by Israel are not airtight after all.

Now Israel is trying to learn how Abed slipped through their fingers, and how three Israeli Arabs did the same on their way to the July 14 attack. Meanwhile, the genie has been let out of his bottle and is wreaking havoc. Israel is praying that it will not ignite the entire region. It is hoping for a responsible adult to arrive and restore calm. There is currently no one on the horizon who fits that description.