While most Israelis are unhappy with the way that Prime Minister Benjamin Netanyahu handled the Temple Mount crisis, they also believe that he was right to install the metal detectors there. 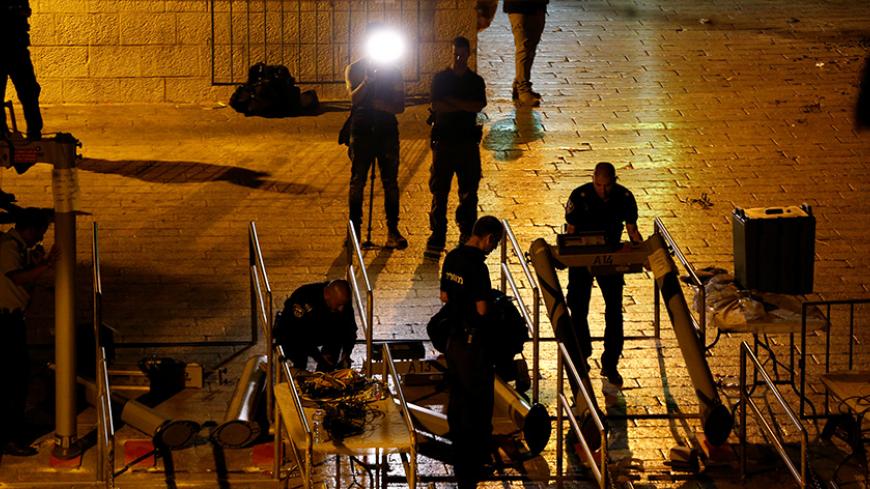 Israeli security forces remove metal detectors that were recently installed at an entrance to the compound known to Muslims as Haram al-Sharif and to Jews as Temple Mount, in Jerusalem's Old City, July 25, 2017. - REUTERS/Ammar Awad

At a meeting of his security Cabinet on July 24, Prime Minister Benjamin Netanyahu convinced his ministers to support the removal of the metal detectors that had just been installed at the Temple Mount compound entrance. Once that was done, he immediately set to work minimizing the damage the decision had done to his image.

It was Netanyahu who first pushed to install the metal detectors within hours of the deadly July 14 attack on the Temple Mount that left two policemen dead. The move was ostensibly intended to increase security at the contentious site, but it was also a way of declaring Israeli sovereignty over all parts of Jerusalem. He made the decision despite warnings from the Israel Defense Forces (IDF) and Shin Bet that it would lead to a fresh eruption of violence.

Even when there were signs that the metal detectors were provoking the Muslim world and that a new round of violence seemed imminent, Netanyahu refused to renege on his decision. With HaBayit HaYehudi ministers breathing down his neck and warning him not to relent, Netanyahu couldn’t allow himself to blink, even when faced with riots on the Temple Mount and demonstrations throughout the Arab world.

On the night of July 21, a Palestinian attacker butchered three members of the Salomon family in the Halamish settlement. By then, it was clear that the clash over the metal detectors was starting to spiral out of control. Netanyahu went right up to the edge as he maneuvered between security considerations and politics, mainly his struggle with HaBayit HaYehudi Chairman Naftali Bennett over leadership of the right.

It took another crisis to offer Netanyahu the ladder he needed to climb off his high horse: a July 23 incident at Israel's embassy in Amman, Jordan. When Netanyahu received the initial reports that an Israeli security guard at the embassy had been stabbed and that in the course of the melee he shot and killed two Jordanian citizens, the prime minister used every possible channel to keep the fallout from spiraling out of control.

At that point, the Jordanian government was demanding that the security guard be handed over for questioning. It would not allow the embassy staff to leave the building and return to Israel. Netanyahu realized that he would be forced to fold with the whole world watching, and he would have no choice but to order the removal of the metal detectors from the Temple Mount. He knew of the impending damage to his image and the political repercussions. At the Cabinet meeting on the night of July 24, representatives of the defense establishment presented various nightmare scenarios if the metal detectors remained and pressure from the Muslim world intensified. The ministers were warned, among other things, that it could lead to the eruption of a new intifada. Here Netanyahu found the excuse he needed to justify backtracking from his argument of just a few days earlier, that the metal detectors were essential to maintaining security at the site. HaBayit HaYehudi ministers Bennett and Ayelet Shaked and Ze'ev Elkin of the Likud opposed the removal of the devices. The other ministers supported the decision.

The same night, at around 11 p.m., the embassy staff crossed the Allenby Bridge into Israeli territory. Among them was Ambassador Einat Schlein and the security guard who fired the shots. Both had been trapped in the embassy for hours. At the time, the prime minister's office was already busy organizing a highly publicized meeting between them and Netanyahu, and the story of their evacuation was sold to the public as a heroic operation orchestrated by Netanyahu to bring them home. In the fight over public opinion, Netanyahu was trying to turn the security events of the last few days into a personal victory, even though the events themselves presented him in a problematic light as the person responsible for the rash decision to install the metal detectors in the first place, only to show weakness by removing them.

On the morning of July 25, Netanyahu flew to the Golan Heights for a security briefing with the IDF's top brass. Accompanying him were Defense Minister Avigdor Liberman and Chief of Staff Gadi Eizenkot. Though the visit was arranged several days earlier, Netanyahu was able to use it to adroitly repair the damage to his image. Wearing a black polo shirt and surrounded by the IDF's top brass, Netanyahu was photographed listening to the briefings, bent over maps and looking out over Syria. There could be no better backdrop to send a message to the public that he is still the responsible adult and the only politician with enough security experience to deal with the threats across the Syrian border.

In a statement to the media at the end of the visit, Netanyahu praised the IDF officers serving in the region but warned, "The situation here is changing rapidly. The Islamic State is in full-scale retreat and Iran is trying to fill the vacuum. Iran and Hezbollah are trying to create a northern arc, armed with very accurate weapons. We are dealing with these new threats to the State of Israel. We are focused on the entire gamut of threats facing Israel."

Despite the prime minister's photogenic visit to the north and his dire warnings of the threats surrounding Israel, the story was sidelined by the media focus on the removal of the metal detectors at the Temple Mount compound. A poll published by Channel 2 on Tuesday evening found that 77% of the public considered the removal of the metal detectors a capitulation, while 67% of respondents said that Netanyahu acted poorly throughout the entire episode.

However, at least as far as Netanyahu is concerned, all these daunting figures really show is a temporary shift in mood. The same thing happened during the cease-fire after the 2014 Operation Protective Edge. Polls taken then showed that Israelis were disappointed by Netanyahu's performance. Much has been written about how his reputation as "Mr. Security" suffered, particularly because he was so closely associated with the failures surrounding Hamas' tunnels originating in the Gaza Strip. Nevertheless, Netanyahu continued to receive the highest grades in polls asking about his suitability to be prime minister, compared to all the other candidates. What this shows is that the damage to Netanyahu's image because of the Temple Mount incident can only be measured over time.

While the Channel 2 poll showed that Israelis were unhappy with the way Netanyahu reacted to the crisis, it also indicated that most Israelis — and not only the right — believed that installing the metal detectors in the first place was the right thing to do. This was good news for Netanyahu. The polls showed, for instance, that the public did not support the position of the Labor Party's new chairman Avi Gabbay, who opposed installing the metal detectors in the first place. Politics is a game of alternatives and choices, with the objective of being the lesser of two evils. As long as there is no leadership alternative to Netanyahu, the prime minister will manage to overcome the damage caused by the Temple Mount saga.