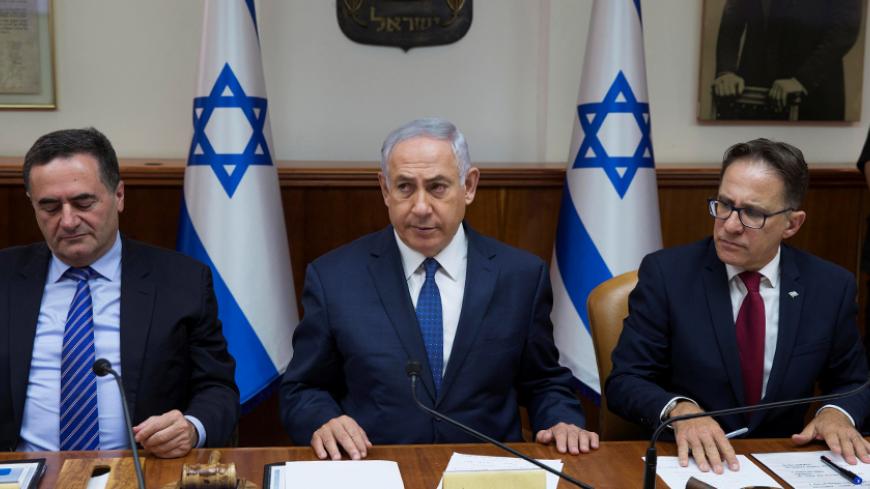 The Israeli-Palestinian dispute, a national conflict that risks turning into a religious war, has added five Israelis and four Palestinians to its list of victims over the past two weeks. Israel, long perceived as an island of stability in a stormy sea, is looking increasingly like a sinking raft. Drunk with power, it is evolving from being a strategic asset in the global fight against Islamic zealotry and terrorism into a provider of top-grade material for sedition by global jihad. When its inebriation with power erupts at sites holy to both Judaism and Islam, it provides excellent incendiary material for the zealots.

Ben Caspit raised the chilling prospect that Prime Minister Benjamin Netanyahu deliberately delayed removing the metal detectors from the Temple Mount on July 25 to feed the flames and divert public and media attention away from the growing tide of police investigations against him. However, not a single policeman went after Netanyahu in 1996, when he approved the opening of the Western Wall tunnels — a mistake that cost the lives of 17 Israelis and dozens of Palestinians. Caspit wondered whether Netanyahu was afraid that removing the metal detectors from the Temple Mount would be interpreted as a display of weakness and push right-wing voters into the arms of HaBayit HaYehudi Chairman Naftali Bennett. But Bennett’s party had not even been born in 2010 when Netanyahu flexed his muscles at Turkey and embroiled Israel in the imbroglio of the Mavi Marmara — a flotilla that sought to break the Israeli-imposed blockade of the Gaza Strip.

One cannot discount the possibility that the corruption probes and right-wing pressure affected Netanyahu’s judgment. However, the installation of the metal detectors (following the July 14 shooting death at the site of two Israeli policemen) was not a momentary lapse, the result of personal or political circumstances. Israel’s top defense and diplomacy professionals, such as the heads of the military, the Shin Bet and the foreign service, have failed time and again in their efforts to minimize the damage of the occupation and the stalemate with the Palestinians and to limit the influence of political and personal considerations on government decision-making. The Temple Mount crisis exposes a fundamental flaw in the system of checks and balances at the top echelons of power — an essential element in a violent conflict and loss of hope for its resolution.

Absent a full-time foreign minister (Netanyahu serves also in that capacity), there is no one at the Cabinet level with the expertise and prestige to present the regional and international implications of a move such as undermining the fragile status quo on the Temple Mount. The contribution of Defense Minister Avigdor Liberman at such events focuses on incitement against Arab Knesset members. Liberman astonished the security establishment when declaring July 23 that Israel can manage without security coordination with the Palestinian Authority. Public Security Minister Gilad Erdan is proving repeatedly to have a fondness for pyromania. He turned a series of wildfires (November 2016) into a wave of nationalistic terror acts (police did not corroborate this assumption); he declared that an Israeli Bedouin teacher shot to death by police was an activist of the Islamic State. He took the opportunity of a reception for US President Donald Trump in May to tell the guest about a supposed “terror attack” that had already been ruled by police to be a traffic accident.

Police Commissioner Roni Alsheikh, a former West Bank settler, is competing with Erdan to see who shoots faster from the hip. The latest example was his decision to install the metal detectors at the Temple Mount, without coordinating such a potentially explosive move with the site’s Muslim custodians (Waqf). In discussions July 19, two days before the horrifying murder of the Solomon family at their home in the Halamish settlement, the Shin Bet and the military recommended removing the contentious devices and finding a face-saving solution to the crisis. As was the case with the building permits for the expansion of the West Bank Palestinian town of Qalqilya earlier this year, the recommendation by the professionals to approve the plan was shelved.

A similar fate befell the reservations expressed by the Shin Bet over the November 2015 decision to outlaw the northern branch of the Islamic Movement in Israel. Then-Shin Bet chief Yoram Cohen warned against the move, saying it would strengthen the organization, make it harder to monitor its activists and those whom it incites, and limit the ability to foil terror attacks. The security Cabinet did not heed Cohen’s advice (including the defense minister at the time, Moshe Ya’alon).

And, in fact, the Shin Bet did not get wind of the plot hatched by three Arab residents of the town of Umm al-Fahm, where the northern branch is headquartered, to murder the two police officers at the gates to the Temple Mount on July 14. The three members of the Jabarin family managed to stockpile deadly weapons, case the scene of the crime and plan the execution uninterruptedly. They were motivated by the religious-nationalist incitement washing over the biggest Arab town in central Israel, in which the head of the Islamic Movement, Sheikh Raed Salah, has been involved for years.

A neighbor of the three terrorists, Khaled Fa’ur, told Shlomi Eldar that since the decision to outlaw the northern branch, the movement had not been openly active in the town’s mosques, yet he did not discount the possibility of clandestine activities. The town’s residents, including religious ones, had not detected any sign pointing to radicalization by the three Jabarin family members. This is not the fault of the residents of Umm al-Fahm. The blame lies squarely with the populist, negligent politicians who pushed the Islamic Movement underground.

Last year, on Holocaust Remembrance Day, an address by the deputy chief of staff, Maj. Gen. Yair Golan, generated anger on the political right. The general dared say that “if there is one thing that is scary in remembering the Holocaust, it is noticing horrific processes that developed in Europe — particularly in Germany — 70, 80 and 90 years ago, and finding remnants of that here among us in the year 2016.”

He continued, “On Holocaust Remembrance Day, it is worthwhile to ponder our capacity to uproot the first signs of intolerance, violence and self-destruction that arise on the path to moral degradation.”

Directing a barely veiled hint at the political echelons, Golan said, “There is nothing easier and simpler than fear-mongering and threatening. There is nothing easier and simpler than in behaving like beasts, becoming morally corrupt, and sanctimoniousness.” Two months ago, Golan retired. He knew there was no hope of being named the next chief of staff. This government prefers obedient false prophets to brave prophets of truth.

There are no indications of sobriety on the horizon, nor any signs that anyone is checking into rehab to treat the addiction to power. As long as the occupation continues, the next terror attack is only a matter of time. As long as the current government is in power, we can rest assured that instead of measured damage control, the next terror attack will result in another local crisis, accompanied by regional shockwaves and additional erosion of Israel’s strategic position.