Did Shiite fatwa save Baghdad from 'Islamic State'?

Iraqi Shiites have rallied to defend the capital from the Islamic State of Iraq and al-Sham (ISIS), with few visible signs of Iranian fighters. 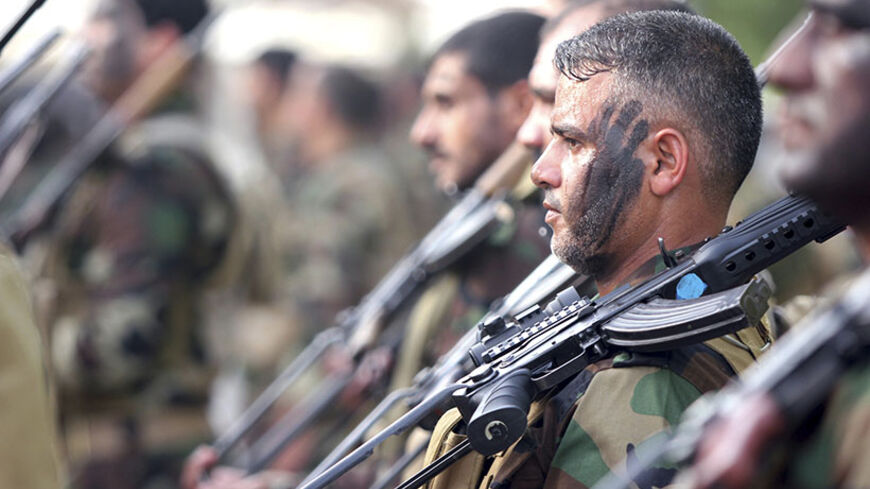 BAGHDAD — A battle without a future, neither a victory nor an end can be seen in the darkness of the Iraqi tunnel, a war that adds to the collection of wars in the Middle East more complications, much blood and a new de facto state that threatens the future of the region.

In Iraq, almost everyone is concerned about the future, both personal and communal. They're afraid that the map of the new Middle East is being drawn on their dead bodies and that their blood is the ink.

"The state was about to fall that day when ISIS (the Islamic State, formerly known as the Islamic State of Iraq and al-Sham) entered Mosul," said Nasser, a veteran journalist who has covered all the crises that have struck this country since the American invasion in 2003. "The religious leadership (Marja) saved us by declaring jihad; if (they had not done) so, ISIS would have entered Baghdad."

The last time the ayatollahs in Najaf issued a jihad fatwa was back in 1920, during the Iraqi revolt against the British, making this fatwa the second in almost a century. Surprise united the Iraqis, despite that support and opposition to the fatwa separated them once again. "I don't understand the reason behind taking this step; it'll fuel the sectarian strife," said one member of parliament in the Mutahidoun bloc led by outgoing parliament speaker Osama al-Nujaifi. He added, "Such a fatwa should have been issued when the United States invaded Iraq, not now. Part of this problem can be solved in politics: We are all against ISIS, which is a terrorist group, but there is a real need to draw a thin line between the people who have demands and have been oppressed for years now and between terrorists.”

I met Sheikh Mohammed, a self-styled commander of al-Bayaa al-Kobra brigade, which was founded 24 hours after the fatwa, a cleric with a turban on his head and military uniform on his body. “I have 1,000 fighters; they are all ready to die now if the Marja requests,” he said.

I asked him where he gets his weapons and money to pay his people. “We are using local resources. We all have weapons at our places. We are using all that we can to keep the region we are serving safe,” he replied. “My group is in south Baghdad. We are guarding the southern gate of the capital, just a few kilometers from the terrorists’ posts," he said. “I’m trying to reach the prime minister, Nouri al-Maliki, to get support from him so that we can continue to do our work.”

According to official numbers, volunteers exceeded 3 million across Iraq. Some of them are veteran soldiers who fought with the old army, others used to fight with groups that fought against the US army during the occupation era. Sheikh Mohammed told Al-Monitor that the process started with an assessment and ended in deployment: “The army checks the capabilities of each volunteer; experienced fighters will be sent directly to the front, those who have slight experience will be given some brief training and then sent to less dangerous areas to be under the supervision of the army, while those who lack any experience will have to go through a long process of training and they’ll be given logistic duties.”

I had to travel for around an hour to meet real volunteers on the front, to al-Azim, 100 kilometers (62 miles) from Baghdad. There, under a burning sun, I met Lt. Mortada Mousawi, who had a bandage over his eye after being wounded last week by a roadside bomb. “I have some 500 volunteers with me here. They are very brave and ready to do anything,” he said. “It’s the fatwa that prompted these people to leave everything behind them and raise guns to fight the enemies of God and the nation.”

During our visit to the area, an operation by the army, along with Shiite militias and the volunteers, was taking place. Gunshots could be heard clearly, and every five minutes a mortar shell would hit an open space in the area around us.

The main militias fighting in the area were Badr and Asaeb Ahl al-Haq, both known to be back in the are and supported by Iran, yet we met no Iranians at the scene. Mousawi, when I asked him about the militias, said, “Iraqis don’t need anyone to fight for them; we need expertise, we need weapons, logistics, but not people, therefore you won’t find any foreigner on our side.”

Very close to al-Azim, a training camp was built to serve hundreds of volunteers who started joining two weeks ago to take part in the fight. Sajjad Hasani, a 45-year-old veteran, was one of them. He said he came from Diwaniyah, southeast of Baghdad, to fight ISIS. “I’m here to defend the religion and the sect. They came to attack Karbala and Najaf,” he said. “I fought against the Baath party in the ’90s, and after 2003 I joined the resistance against the Americans. Today I’m ready, more than any time before, to become a martyr. This is the holiest war.”