The residents of Fallujah are not pledging allegiance to Abu Bakr al-Baghdadi but could be a part of the resistance to IS. 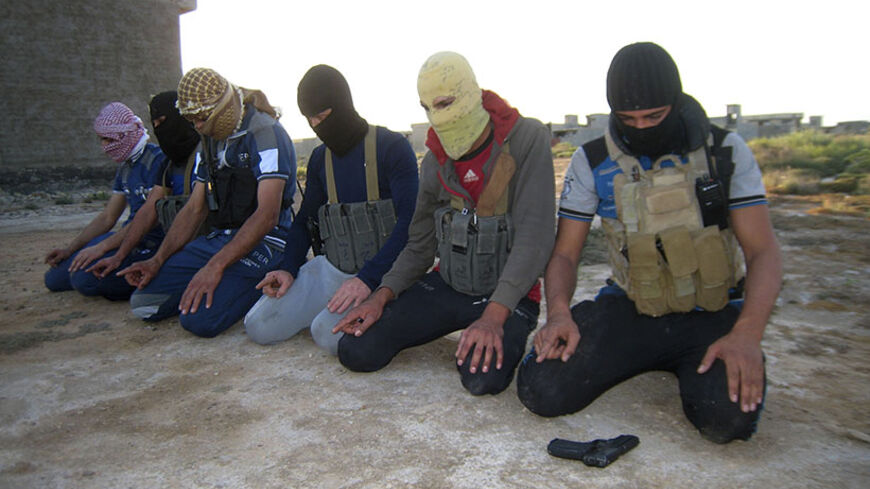 Masked Sunni gunmen pray during a patrol outside of Fallujah, April 23, 2014. - REUTERS

Earlier this year, the fall of Fallujah, which is particularly symbolic for Iraq's Sunni insurgents, marked the beginning of events that followed, starting from the fall of Mosul on June 10 until today. Yet, Fallujah also could be the beginning of a solution to the crisis, in case the required sorting was made between Sunni insurgents and the Islamic State (IS, formerly known as the Islamic State of Iraq and al-Sham, or ISIS).

On July 6, a reliable tribal source told Al-Monitor, “An armed convoy of vehicles carrying IS flags crossed the villages of northern Fallujah. Immediately afterward, a gunmen, who identified himself as a messenger of Abu Bakr al-Baghdadi, held meetings with armed factions, tribal leaders and clerics, and called on them to either pledge allegiance to Baghdadi, or engage in a bloody confrontation with IS.”

According to the source, the visit was not a surprise. As the self-proclaimed caliph, when Baghdadi made public appearances in Mosul, armed factions and clans knew that a confrontation with him has become imminent, particularly since IS declared that any party who refuses to pledge allegiance (to Baghdadi) will be killed.

The answer that was given by leaders in Fallujah to Baghdadi’s delegate was vague, according to the source. It reflected their great embarrassment, especially since they do not have the ability to fight IS and the Iraqi government at the same time. Moreover, they will not be able to pledge allegiance to Baghdadi, because their ideology and thoughts are totally different from those of IS in terms of the objectives and limits of the armed rebellion led by the city [residents] — which also led the Sunni demonstrations throughout 2013. In addition, the leaders of Fallujah can't reconcile with the current government in the absence of a political deal regarding the Sunni crisis in Iraq.

This incident raises a major question: Why didn’t Baghdadi seek to declare the caliphate from Fallujah, which IS has been controlling for more than half a year now, and why did he choose northern Mosul instead?

There are certainly different answers to this question, including that Fallujah is a small city in western Baghdad, while Mosul has greater historical, demographic and economic weight.

Nevertheless, there is another answer to this question and it's related to the history of Fallujah since the US occupation of Iraq in 2003. In fact, the city witnessed several battles with the US Army, and it is home to the largest number of armed groups and main field leaders who led the armed confrontation with the US Army for years.

Fallujah’s military environment and the diversity of armed groups there have not allowed IS to completely subjugate (the city), even six months after the government lost control over it.

Sheikh Ahmed al-Jumaili, a member of Fallujah’s tribal council, told Al-Monitor that IS has called on tribes and insurgents to pledge allegiance to Baghdadi, but the tribes refused. On the other hand, he denied news about the withdrawal of many armed factions from Fallujah after IS killed some of their leaders.

In reality, these stories are highly credible, as a tribal source from Fallujah confirmed to Al-Monitor that the mutual assassinations between Sunni factions and IS did not stop in the last few months. Yet, in case the situation remains unchanged, the source expected IS to defeat and force the other factions to pledge allegiance to the group, through its significant potentials. He stressed that what is happening now in Fallujah is an attempt by a large number of the clergy to leave [Fallujah] to avoid being forced to pledge allegiance to Baghdadi.

The source confirmed that since April 2014, large numbers of ISIS members left Fallujah and headed north, in preparation for the battle of Mosul, and returned after they managed to subjugate a large number of Sunni cities and towns, as Fallujah is expected to be the starting point of any military action against Baghdad.

The source believes that the armed groups’ objectives in Fallujah do not include the formation of a Sunni province, and confirms that during the period of protests, Fallujah rejected the partition option and contented itself with expressing the people’s legitimate demands, while preserving the unity of Iraq.

A comprehensive agreement has started to take shape inside and outside Iraq, and the eradication of IS will happen only through efforts deployed by the [Iraqi] state, in cooperation with the Sunni population in the IS controlled areas.

Yet, reaching such cooperation requires quick political, social and legal measures that guarantee the protection of tribes and insurgents in rebellion against the state. It should also provide a strategy capable of creating a popular base that cooperates with the state to eliminate IS.

The restoration of Fallujah through this kind of comprehensive agreement would be the most successful starting point to seize the rest of the cities from Baghdadi's grip.