A closer look at the Islamic State's first leader Abu Bakr al-Baghdadi's chosen successor, Abdullah Qardash, offers some insight into what's next for the terror group. 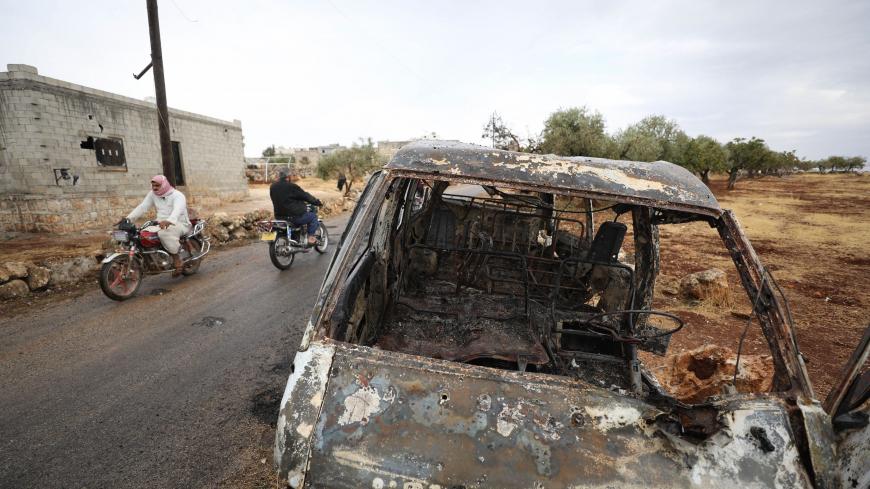 A picture taken on Oct. 28, 2019 shows Syrian bikers riding past a damaged car at the site of a suspected US-led operation against Islamic State chief Abu Bakr al-Baghdadi the previous day, on the edge of the small Syrian village of Barisha in the country's opposition-held northwestern Idlib province. - OMAR HAJ KADOUR/AFP via Getty Images

The death of the Islamic State’s erstwhile caliph, Abu Bakr al-Baghdadi, raises major questions about the eschatological group’s future. It is difficult to predict how IS' momentum and popularity will change in Iraq and Syria in the aftermath of Baghdadi’s death. It is also unclear how this symbolic event will play out in terms of the terror group's operations, strategies, tactics, priorities and structure. As the extremist group fights to regain influence and power in these two countries, the ascendancy of Baghdadi’s successor could lead to divisions and internal struggles that severely weaken IS. By the same token, new leadership also has the potential to re-energize the terror franchise and help IS achieve its goals.

It is logical to assume that IS began preparing for Baghdadi’s death long ago. Ever since many state and non-state actors began waging military operations against the group in 2014 — with the capture or killing of Baghdadi a high priority for many of them — he was a target at every moment throughout the final years of his life. In August, the IS-linked Amaq news outlet reported that Baghdadi anointed his successor, Abdullah Qardash.  The decision to select a successor was never confirmed by IS, and some have disputed the authenticity of the Amaq statement.

Who is Qardash and why did Baghdadi select him?

Qardash claims to hail from the Quraysh tribe, a requirement for the caliph under Sunni jurisprudence. In addition to his family’s lineage and his education, Qardash’s roles in Iraq under Saddam Hussein, the US occupation and the years of the caliphate’s existence are important factors too.

From the mostly Sunni district of Tal Afar, Qardash, who has Turkmen roots, graduated from the Islamic Sciences college in Mosul. Nicknamed "the professor,” he served in Saddam's army as an officer. Following the US/UK-led invasion and occupation of Iraq and the subsequent capture of the Iraqi dictator in 2003, Qardash joined many other Iraqi Sunnis in turning to violent extremism. Along with Baghdadi, Qardash was imprisoned at Camp Bucca near the Iraqi-Kuwaiti border after being captured by US forces because of his links to al-Qaeda, for which he served as a religious commissary and a general Sharia jurist. While incarcerated in Camp Bucca, Qardash and many other future al-Qaeda/IS militants first met Baghdadi and were influenced by his radicalization, earning the prison the name of the birthplace of IS.

Fast forward to 2014, five years after Baghdadi’s release from Camp Bucca. The two men reunited when Qardash welcomed Baghdadi to Mosul, supported his leadership and pledged allegiance to him as IS took control of the city. During the caliphate’s existence in western Iraq and eastern Syria, Qardash served as one of Baghdadi’s lieutenants, establishing himself as a brutal policy-maker.

Trained by Saddam’s regime, Qardash is closely connected to a class of former Iraqi officers who gained experiences during the Iran-Iraq War (1980-1988). While serving Baghdadi in IS, Qardash gained a reputation for brutality. Analysts have called him as cruel and authoritarian based on his elimination of those within IS who challenged Baghdadi, earning Qardash another nickname: "the destroyer." Qardash also earned the respect of many within IS.

Yet only time will tell whether Qardash can successfully fill the shoes of IS' first leader. Baghdad’s charisma and special status among Salafist-jihadists made him a unique leader. It would be difficult for anyone to truly replace him, given the powerful image that Baghdadi created for himself and the level of influence that he had over many Sunni extremists worldwide.

As IS' project faces new realities in Iraq and Syria, it is too early to know how many of the IS fighters who pledged allegiance to Baghdadi will extend their loyalty to Qardash. As the remnants of IS are currently scattered throughout Iraq and Syria, there are divisions between different sub-groups with various leaderships from different Arab countries. Such dynamics call into question whether influential figures within IS will reject the legitimacy of Qardash as the franchise’s leader and how power struggles could play out. It will also be important to look at the group’s offshoots around the world to see when or if they decide to officially accept Qardash’s authority.

Looking ahead, there is every reason to conclude that IS will remain relevant regardless of how the succession process plays out. Unless the terror group's ideology becomes widely discredited within the world of Salafist-jihadism, the apocalyptical group’s narratives will continue to sit well with extremists in Iraq, Syria and many other countries from Burkina Faso to Afghanistan. Within this context, Qardash will likely be able to count on backing from committed and loyal IS supporters that Baghdadi led for years.

Unquestionably, groups like IS will always take advantage of chaotic situations such as the fall of the Iraqi and Libyan regimes in 2003 and 2011 and the Syrian uprising that erupted in 2011 to gain influence. As long as violence and widespread instability continue to spread throughout the greater Islamic world, there will always be new generations of extremists and new leaders to step up and take command of such projects. It would be misguided to expect IS to have lost its relevance as a result of Baghdadi’s death. In fact, there is a real possibility that the terror franchise will become more dangerous in the post-Baghdadi period.