A reduction in state subsidies has caused fuel, bread and other prices to rise dramatically in Egypt, stoking anger from consumers, taxi drivers and shop owners. 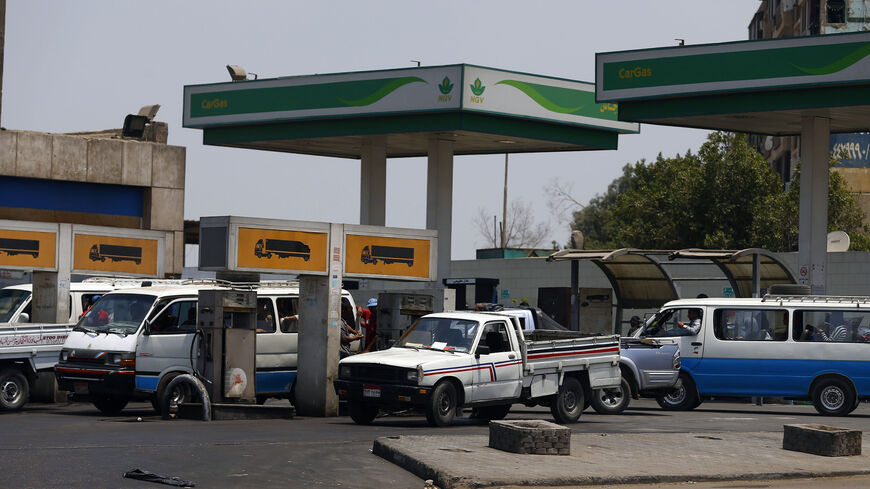 A microbus waits with other vehicles for fuel at a gas station in Cairo, July 6, 2014. Egypt's Prime Minister Ibrahim Mehleb has sought to justify politically sensitive subsidy cuts on fuel and natural gas that took effect Saturday, saying they were a necessary part of fixing an economy hammered by three years of turmoil. - REUTERS/Amr Abdallah Dalsh

CAIRO — On Jan. 17, 1977, Egypt's then-Deputy Finance Minister Abdemonem al-Qaisony stood in front of the parliament to declare a number of economic policy changes. The changes were basically increasing the prices of fuel, bread and 25 other consumer goods. Those decisions were ordered by President Anwar Sadat. Back then, Sadat (who was to be assassinated four years later) was celebrated as the man who had defeated Israel and had brought Israelis to peace talks; he also believed he was invincible.

Egypt literally went ablaze in the two days following the irrational decisions of the Sadat regime. Sadat's presidential rest houses were the first to go. The luxurious mansions scattered in almost every governorate across the country were ransacked by hundreds of thousands of infuriated people who barely made a living before the proposed austerity measures. Police stations, government offices and state-owned businesses were attacked in every city. The world dubbed it "the bread riots," while Sadat mocked it as the "thieves' uprising."

A very similar action was taken by Egypt's government three days ago, on July 3, the anniversary of the toppling of President Mohammed Morsi that was orchestrated by Gen. Abdel Fattah al-Sisi, who became president of Egypt one month ago. Sisi now is in much the same position as Sadat in 1977 — Sisi is a military strongman who has recently won major battles against the Muslim Brotherhood and other opposition factions, with every sign indicating he very much believes he is also invincible.

The government's decisions, all publicly defended by Prime Minister Ibrahim Mehleb, raised the prices of every form of fuel for both ordinary consumers and industrial facilities and the prices of electricity and natural gas supplies for household use. It shocked the market into raising the prices of everything from sandwiches to real estate.

Hajj Mahmoud, the chief of a very rundown, downtown Cairo tea shop I patronize, was the first person I discussed the government decisions with.

"You paid a pound and a half for tea last night, today you pay two pounds, but in the end, poor people like me pay for everything and everyone, including you and Sisi, whom we brought to the presidency."

Mahmoud described the situation pretty precisely. Vehicles in Egypt run on five different kinds of fuel, the priciest of which is unleaded gasoline — locally referred to as 95 — usually used by the newest and most expensive cars. The price of 95 went up 7%. Next came the 92 gasoline, the most commonly used fuel by ordinary sedans, which was raised 41%. The 80 gasoline, used by public and private transport buses and minibuses, went up 78%. Diesel fuel, used mainly by cargo trucks, saw its price increase 64%. Then, last and most shocking, came natural gas, the most preferred fuel for taxis across the country, whose price went up 175%.

"The microbus I take to work raised the fare and I cannot blame him; the passengers fought with him because they were angry but paid the new price," said Mahmoud, "Now we all know that Sisi knows nothing about the suffering of the poor he claimed to protect."

Meanwhile, Cairo taxi drivers decided to switch off their meters as soon as the new fuel prices were applied. They were in disbelief upon hearing of the staggering and abrupt 175% in the price of natural gas.

"This was our only way of making a living; you invest a few thousand pounds to install a natural gas system to lower costs, and then the government comes and takes away more money than what we were saving," said taxi driver Wael Mohamed, 36.

"I have been fighting with customers all day; they want me to switch on the meter, but I cannot else I end up paying the difference to the nearest gas station," Mohamed told Al-Monitor.

As Cairo's taxi drivers planned major protests for the morning of July 6, the cabinet declared that cab meters would be altered to reflect the increased fuel prices; this announcement absorbed some of the taxi drivers' anger before they heard of another government decision to charge 100 pounds for every meter alteration.

Major streets leading to the presidential palace in eastern Cairo were paralyzed by protesting drivers.

"The government wants to collect money; these are not economic decisions, this is the government deciding to crush the poor for the sake of the rich," said Mohamed, who vowed to join the protesting drivers. "It's not only about natural gas; everything is more expensive and our income is shrinking."

The Consumer Protection Authority published a statement coinciding with the government's latest decision, estimating a 200% rise in prices of consumer goods, an increase the majority of Egyptians cannot afford.

"I don’t think the prices will jump overnight, it will happen in stages," said Moheb Girgis, a grocery shop owner in downtown Cairo. "They will impose a 10% increase to cover the new transportation costs and if people accept it, they will continue raising prices."

It wasn’t only taxi drivers and grocers who complained; the decision angered steel tycoons as well. Egypt's top independent paper Al-Masry Al-Youm quoted a top stakeholder of the Suez Steel Co. as threatening to shut down his business in Egypt "if the government doesn’t interfere to regulate the markets, imports and back local industries."

The government's new decisions also applied to industrial facilities, particularly the cement and steel factories in almost every governorate. Starting today, such factories will be paying 30-70% more for fuel they have gotten at fully subsidized prices for decades.

Chambers of commerce confirmed that steel and cement prices will jump 280 and 50 pounds respectively, a rise that will trigger another explosion in real estate markets that are already beyond the financial capabilities of the overwhelming majority of Egyptians.

Back in January 1977, state-owned newspapers and radio led the crackdown against the anti-inflation protesters, who were tagged "communist conspirators spreading chaos and planning a revolt against the regime." The third day of nationwide riots witnessed the arrest of thousands of people from all walks of opposition life, and thousands of impoverished apolitical citizens.

On July 6, as more sectors join taxi drivers in their protest, Sisi signed off on a decree imposing further taxes on tobacco and alcohol products.