The government mobilized its police forces to prevent any massive protest against its reduction in fuel subsidies; road infrastructure improvements also helped soften the blow of increased prices for consumers. 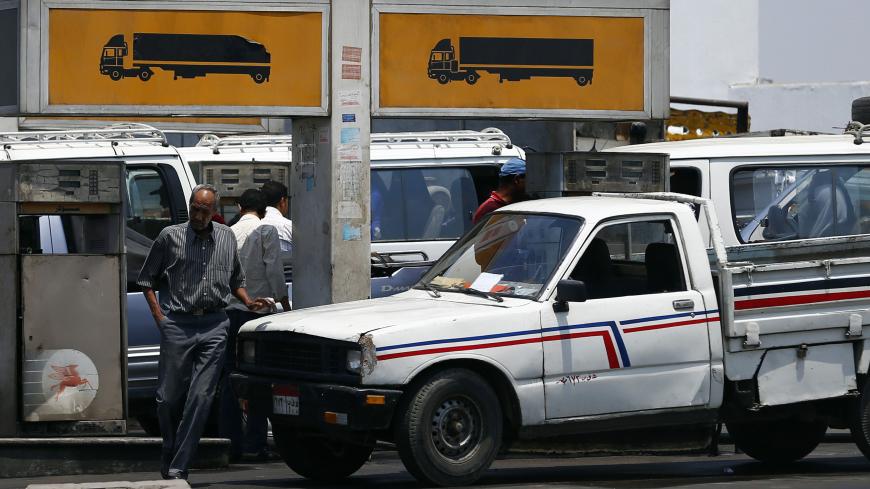 People wait to buy fuel at a gas station in Cairo, July 6, 2014. Egypt's Prime Minister Ibrahim Mehleb sought to justify politically sensitive subsidy cuts on fuel and natural gas announced July 4 — increasing their prices by more than 70% — saying they were a necessary part of fixing an economy hammered by three years of turmoil. - REUTERS/Amr Abdallah Dalsh

CAIRO — On one smoldering July weekend that also happened to be during the Muslim fasting month of Ramadan, Egypt's regime, led by military strongman Abdel Fattah al-Sisi, announced that it was reducing fuel subsidies. The decision sent waves of anger through the poor — and poorer classes of the country — still suffering through the political and security turmoil the nation has been undergoing since the January 2011 revolution.

When the subsidies were reduced, middle-class workers screamed, taxi drivers frowned and memories of Anwar Sadat's 1977 bread riots were discussed at tea shops that already had raised the prices of their top selling products: tea, coffee and water-pipe tobacco. But the next day, lines at every gas station across the country seemed as normal as ever, except for some loud drivers who also slipped back into fearful silence after noticing that their screams — unlike those made during the 3½ years before Sisi's presidency — had ceased to echo in the ears of others.

"It's not surprising, the regime seems to have strategized how to secure and pass its decision before it even finalized drafting it," a state-owned gas station manager told Al-Monitor on condition of anonymity.

"Those two gates were manned by police vehicles and their armed personnel," he added, pointing to the massive entrances of the station opening on a main Cairo artery. "The police convoy arrived a couple of hours before the decision was put into effect. The officer told me not to worry, no one will dare to protest. And no one did."

Besides manning gas stations, the police department deployed formations of riot police around main arteries, in addition to forces that have been deployed to other areas since June 2013, while brand-new Jeep Wranglers carrying masked special forces continued to patrol the capital, Cairo, and main cities around the clock. But the sudden and more effective change was the policing of public transport stations across the country and mobilizing military buses at lowered prices to fight inflation.

"People thought they would pay 100% more on transportation, but the firm policing allowed an inflation of 25-35% at most, except for a few incidents in more distant areas. As for private vehicles, they continue to consume, but in a different pattern."

This different consumption pattern was in itself a sign of acceptance and coping with whatever the regime decided. The gas station's records of July 2014 show a decrease in consumption of expensive fuel, but a rise in cheaper kinds.

"The sales of 92 unleaded gasoline [a private vehicle's optimal option] dropped from 20,000 liters per day to 16,000; the difference shifted to 80 gasoline [the cheaper leaded gasoline] and natural gas."

The only cars around the gas station during Al-Monitor's interview were new mid- and top-range vehicles that cost between 100,000 Egyptian pounds ($14,500) and 300,000 Egyptian pounds ($43,000). Many said protesting the government's decision would be more expensive than heeding it, while others from higher economic classes consider the inflation to be normal, which is exactly the case for them: The subsidies lifted off the more expensive kinds of fuel consumed by the richer and richest were less than those removed from the middle and poorer classes' fuel.

Meanwhile, Mahmoud Hafez, an owner of a multimillion-pound construction business, said, "The rich class continues to drive the economy despite the ongoing inflation."

"They have more options and more financial capabilities than the classes that might protest, their lives are backed by bank loans and jobs at private businesses and they will continue to generate revenue," said Hafez, who told Al-Monitor that his business has not suffered any losses since January 2011. "Revenue might have slowed at the time of security unrest, but it continued to increase.

"If demand continues, a 20,000 pound [$3,000] inflation per apartment is nothing for someone who has a job and wants to get married, and it will be covered by the revenues increasing with the general inflation.

"In Egypt, the demand never stops.

"Whoever invested $100,000 in real estate knows exactly what they are doing," Hafez said, "and no matter what happens, they will generate revenues, as opposed to someone who invested $5,000 and has two years of installments they cannot afford."

Hafez said, "Between those two poles of the Egyptian market, the 6-, 7- and 8-digit investors are always driving the market and forcing it to accept inflation."

But the military didn't only rely on the acceptance of these basic economic patterns. Over the six months before the fuel subsidy reduction was declared, the military opened three main state-of-the-art traffic intersections; it had taken over the reconstruction duties for the intersections in 2013. All three points relieved massive traffic jams the eastern part of Cairo has suffered for years; in addition, the military continues to build new roads and highways across the country. Besides increasing the value of real estate in what became districts with good road infrastructure, it also had positive effects for public transportation and taxi services.

"There is a slight drop in customers who decided to buy relatively cheap cars or have been forced to use public transport instead of taxis at least for a portion of their trips," said Ahmed Ali, a taxi driver who believes he won't be able to make a living if another drop in customers or another wave of inflation kicks in.

"But not having to take massive detours around protest areas and traffic jams definitely increased my income, and despite the inflation, it remains better than when protests paralyzed the city for months on end."

In fact, a recent report published by the Egyptian Center for Economic and Social Rights (ECESR) indicated that the months since Sisi's rise to presidency have witnessed the least number of protests since 2011. The drop in protests and a return of relative stability, at least in the capital's central areas, has had a positive effect on tourism. Some 10 international hotels situated around Tahrir Square have seen a rise in the numbers of their favorite and top-paying customers coming from the Arabian Gulf countries, while hotels being built have significantly increased their pace of construction, which had come to a halt due to the unrest.

Hatem Zayed, an economic researcher and program manager at ECESR, told Al-Monitor that there are two reasons for the public's acceptance of the recent economic decisions. "Fear comes first; the public decided to accept those decisions after seeing the massive crackdowns on opposition protesters since [President Mohammed] Morsi's ouster in July 2013. The second reason is that inflation is happening gradually, while Sisi continues to promise mitigation policies. The combination convinced people to be patient," said Zayed.

But if the contractors, including drivers and construction businesses, have broken even, "The consumer was left paying more despite receiving the same income. And this is what the government has to worry about.

"Sisi has not improved or saved the economy, he is just maneuvering around it while people are dreaming of the national projects and prosperity the regime continues to promise," said Zayed, who agrees that the regime is just extending the period before the economy crashes.

"It's only a matter of time before people start protesting the economic distress; it is inevitable."