The Democratic Union Party, the leading Kurdish party in northern Syria, says the region will not actively take part in the Syrian presidential elections. 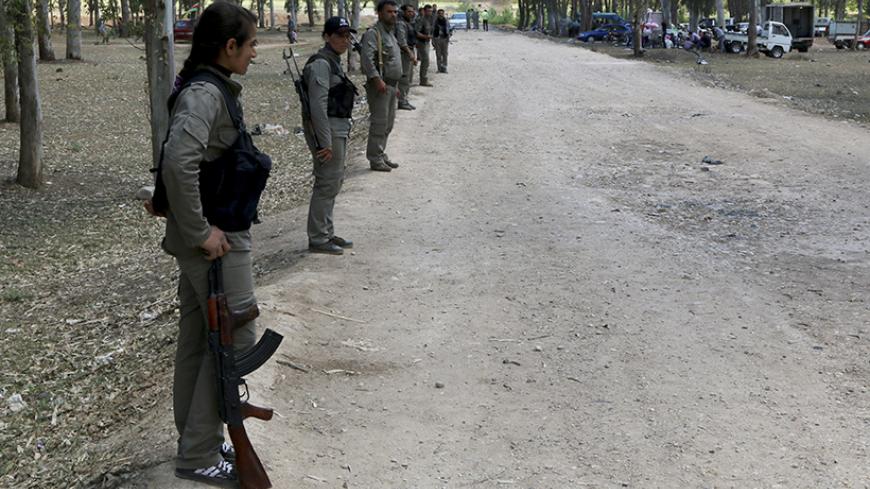 QAMISHLI, Syria — The newly established canton administrations in Syria will not allow the Syrian government to place election ballot boxes in Kurdish-controlled cities in northern Syria on June 3. Only in the cities of Qamishli and Hasakah, where there is still a regime presence, will the government be able to install ballot boxes.

The Syrian government sent 350 ballot boxes to Qamishli's airport and 70 to Hasakah. Syrian citizens will be allowed to vote with their identity cards in regime-controlled security areas in Hasakah and Qamishli city, and in the military base and airport of Qamishli.

Nasr Mohammed, a Kurd from Amuda, said he would vote for presidential candidate Maher Abdul-Hafiz Hajjar “because he is a communist.” He told Al-Monitor, “I will go to Qamishli, since as of now the administration has not permitted voting in Amuda. It’s only possible in Qamishli and Hasakah city.”

Syrian government officials have paid several visits to the city of Qamishli as part of preparations for the elections, and more militiamen are seen on the streets of Qamishli, increasing tensions with Kurdish forces patrolling there.

Hasakah Gov. Mohammed Za'al Ali campaigned for President Bashar al-Assad, while 270 Arab tribal leaders gathered on May 15 in Qamishli to support the government. On May 29, Syrian Defense Minister Emad Fahad Jasim al-Firej visited the Syrian army in Qamishli and suggested putting election boxes all over Hasakah.

In the run-up to the presidential elections, Syrian government forces have increasingly clashed with Kurdish fighters in Qamishli and Hasakah. Many Kurds see these clashes as a sign the Syrian government still does not respect Kurdish rights, suggests Kurdish official Ilham Ahmad. Moreover, they accuse the Syrian government of using al-Qaeda offshoot the Islamic State of Iraq and al-Sham (ISIS) to attack the Kurds.

The Kurdish Democratic Union Party (PYD), affiliated with the Kurdistan Workers Party (PKK), established an autonomous administration in the Kurdish areas of northern Syria in January of this year. Members of the Kurdish youth group the Revolutionary Youth Movement, which is calling for boycotting the presidential elections, were attacked by regime supporters May 30. They are planning to hold demonstrations again on election day in Qamishli.

But this is unlikely to happen. Kanaan Barakat, the new interior minister of the recently established administration in Hasakah province, says they will not support this election.

“This is not the atmosphere to do an election. It should be in a peaceful and democratic way. Thousands of people were killed, thousands of people fled from their cities and a lot of towns were destroyed in these last three years,” he told Al-Monitor in Amuda.

Kurdish politicians inside Syria say that only if Assad accepts a solution for all of Syria can presidential elections be held freely in the Kurdish areas. Nevertheless, the PYD will not prevent Syrians from voting for Assad in Qamishli or Hasakah. They fear that Syrian citizens living in Hasakah province would lose their jobs or the government would not allow them to continue their study in the universities of Aleppo or Hasakah.

“We don’t mind. It’s democracy, if they go vote for Assad in regime places, but not in places under Kurdish control,” said Akram Hissau, the prime minister of the Kurdish administration. “But people working in government organizations would be fired if they do not vote.”

PYD official Aldar Xelil said that those who want to continue their education or their jobs granted from Damascus have no choice to vote. “But the people, in their heart, are not with the elections.”

Loqman Daquq, a student studying in Hasakah and living in Qamishli, said he will vote for Assad. He said, “I am a student and I want to continue my education.”

Some Kurds who are not dependent on government jobs say they will not vote to protest the government’s oppression of Kurds.

Hozan Ibrahim told Al-Monitor, “Syria is not only for Alawites. It’s for all communities living here, and they don’t recognize the Kurdish people here. For that reason, we will not vote in the elections.” Ibrahim claimed the government previously confiscated some of his land and gave it to Arab citizens, adding, “If the government would give back my land, I would vote, because that means they recognize my rights.”

Nevertheless, there are also Arabs and Christians living in the Kurdish-dominated areas who are inclined to vote for political reasons. “Many people want to vote because Bashar is better than ISIS and the Free Syrian Army,” said Andre Issa, a Christian from Qamishli.

Sauda Daxil, from the village of Thawra outside of Qamishli, told Al-Monitor that her Arab village would vote for Assad. She said, “Tomorrow they will come with cars, vans and buses to take people to Qamishli with their IDs. They will go vote for Assad.”

Meanwhile, the Kurds are planning to hold their own elections on Sept. 21.