After Kobani, where is Islamic State's next target?

The besieged strategic Kurdish town of Hasakah, swollen by an influx of refugees and barrel-bombed by Syrian regime forces, is coming under fire from the Islamic State. 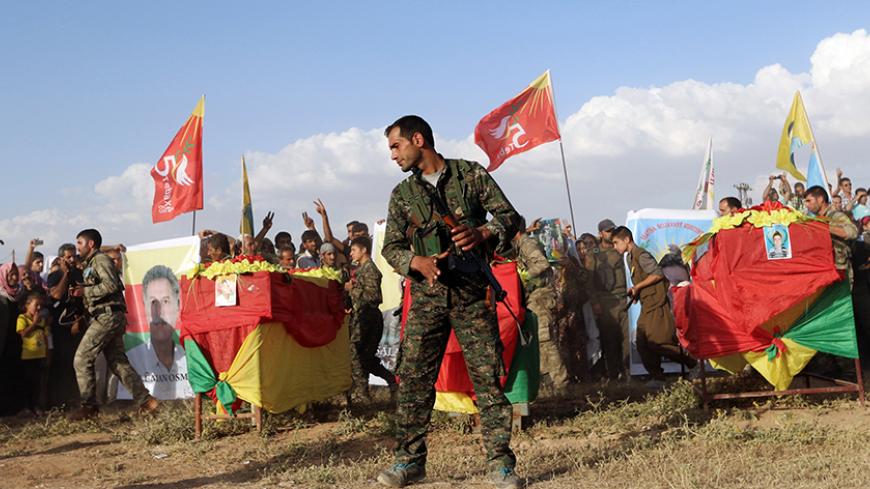 Kurdish People's Protection Units (YPG) members organize a funeral for members said to have been killed during clashes with forces loyal to Syrian President Bashar al-Assad in Hasakah, May 23, 2014. - REUTERS/Rodi Said

In a newspaper interview in November 2013, Salih Muslim, the co-chairman of the Kurdish Democratic Union Party of Syria (PYD) had predicted: “The situation in Hasakah is sensitive. If pushed, it could lead to Kurdish-Arab clashes.” News reports from the northeast Syria town of Hasakah, which we don’t usually hear much about, proved Muslim’s warnings were on the mark. Clashes that erupted in Hasakah on Jan. 17 between the PYD’s military wing, the People's Defense Units (YPG) and National Defense Forces, an auxiliary of Syrian President Bashar al-Assad’s army, couldn’t be halted and inflicted casualties on both sides.

Reports coming from south of Hasakah say the Islamic State (IS) is massing forces for an offensive to capture Hasakah while coming under coalition air force attacks in the same area.

A glance at the map of Syria is enough to understand the strategic value of Hasakah. Above all, Hasakah dominates the roads between IS-controlled Mosul and Raqqa. It is the southern access to Jazeera canton of the Kurdish Rojava region.

It is also the last bastion of the Assad regime in that area. The latest developments in Hasakah show that the town. which had been generally calm in the 4-year-old civil war, is now the focus of the power struggle between Kurds, Arabs and IS. Kurds live north of the Khabur River that divides Hasakah, while mostly Arabs live to the south of it. The town is already divided demographically. What is escaping attention is that tens of thousands of Syrians of different religious and ethnic origins escaping from the war have increased the population of the town to 400,000.

In the summer of 2014 Hasakah appeared as a true no-man’s-land and IS, despite its reinforcements, could not capture it. Coalition air attacks that sought to sever the links between IS forces in Syria and Iraq diminished the effectiveness of IS in the region. That meant a new balance of power in mixed town of Arab-Kurd Hasakah between the YPG and pro-Assad militias. The new balance shows the YPG in charge in predominantly Kurdish north Hasakah, pro-Assad militias controlling the town center and its south while IS prevails in a small portion of its southwest.

The first clashes between the Kurdish YPG and pro-Assad militias caught many off guard, as these two forces were believed to be observing an undeclared nonaggression pact.

A brief news report on the night of Jan. 17 said at least three people were killed and many others wounded by blasts in Hasakah’s Salihiye, Miftiye and Tel Hacer neighborhoods.

After Syrian planes attacked a YPG convoy moving from Qamishli to Hasakah on Jan. 18, the YPG responded by attacking a pro-Assad militia post in Tel Hacer that afternoon and took 30 militiamen prisoners.

Kurdish-affiliated Ara News reported that on Monday night Syrian Gen. Ali Memluk convened a meeting of YPG commanders and Arab sheikhs of the town and secured a 24-hour cease-fire. Jan. 19 was a quiet day.

Field reports say the YPG has taken over many official buildings in Hasakah and that it is in full control of northern Hasakah and is advancing to the town center after receiving reinforcements from Serekani and Qamishli. A local source told Al-Monitor that the real aim of IS was to capture Hasakah and that is why it was still bringing reinforcements to its south but dispersing them under persistent coalition air attacks. Our source said IS has issued an ultimatum for the town to surrender by Jan. 24 or be hit with heavy weapons. This source says that pro-Assad militias actually want to have IS control the town.

Field developments indicate a trend for the clashes in north Syria to shift from Kobani to Hasakah. IS has no problems moving around troops and materiel in this area. Mosul is not far from Hasakah, tempting IS to easily hit Qamishli, seen as the capital of Kurdish Rojava. More heavy fighting in Hasakah center and in its periphery seems inevitable in the coming days.

How do parties explain the eruption of clashes at Hasakah? After a prolonged cease-fire with the YPG, suddenly Assad's forces stepped up the brutality by killing many civilians in Hasakah, particularly by airdropped barrel bombs. Pro-Assad forces that made a deal with IS in northern Syria want to bring Hasakah under their joint control with IS, then move toward Qamishli and split the Kurdish Jazeera canton. To achieve that goal, the Assad regime was even using illegal cluster bombs, the YPG reported.

Assad forces alleged that the PYD cooperated with coalition forces and has long sold out the Assad regime. On the political front, the PYD has succeeded in having itself invited, despite opposition by Jabhat al-Nusra and the Damascus regime, to the Syrian Forces Conference planned to be held in Russia. In short, the PYD has betrayed Damascus by violating their agreement.

What are the positions of other relevant parties? While IS appears to be satisfied with the clashes, the Syrian opposition thinks that it may be a setup between the PYD and Assad regime on the eve of the Russia meeting. Opposition leader Abdulaziz Halife said: “The regime, by clashing with its partner YPG before the Moscow meeting, wants to create the impression that the Kurds are actually a part of the opposition and thus shake the unity of the opposition.”

In a nutshell, it is the IS that is delighted with the Hasakah clashes while Kurds, the Assad regime and the Syrian opposition accuse each other. Further escalation of Hasakah clashes can lead to a new and massive wave of displacement after housing tens of thousands of Syrians escaping from the war. The question now is whether Hasakah will be a new Mosul or Kobani.

Of course, this vital question has no meaning for those trying to survive the war in Hasakah. Should the clashes escalate, they will have no other option then but to take to the roads again for yet another uncertain future as another city in Syria goes feral.