The Democratic Union Party is investing in autonomous institutions in Syrian Kurdistan while maintaining a relationship with the Syrian regime, Andrea Glioti reports from Qamishli. 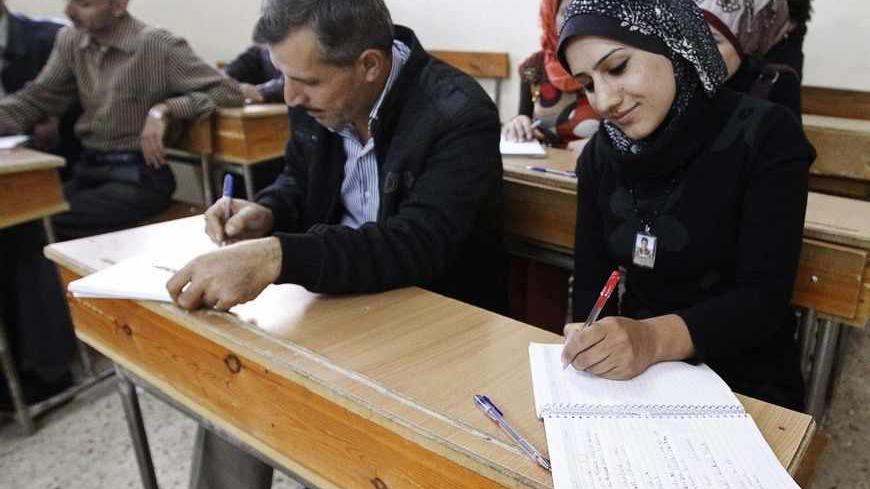 Syrian Kurds practice reading Kurdish at a school in Derik in Hasakah province, Oct. 31, 2012. The Syrian government is now allowing the teaching of Kurdish in a move seen as an attempt to keep the Kurdish population in the regime's fold. - REUTERS/Thaier al-Sudani

QAMISHLI, Syria — Bilingual signs, “Western Kurdistan” (Rojava in Kurdish) on car license plates, Kurdish security forces (Asayish), Kurdish courts, municipalities, flags, unions and schools teaching Kurdish. This is the new look of the Kurdish-majority Syrian northern regions, the outcome of the withdrawal of regime security forces in July 2012 and the result of a delicate coexistence between Baathist and Kurdish institutions.

Syrian Kurds now have the chance to reap the benefits from the stalemate between the regime and the Arab opposition. But all this would not have been possible without a certain degree of connivance with the regime by the main Kurdish militia on the ground — the Democratic Union Party (PYD), which is affiliated with the Kurdistan Workers Party (PKK). Regardless of the de facto autonomy achieved and the growing popularity of the PYD, some fear the authoritarian features of the party’s agenda.

Even the appearance of Qamishli, the main city of Syrian Kurdistan, brings evidence to the thesis of a tacit agreement between the PYD and the regime: Pictures of Bashar al-Assad and loyalist graffiti are still clearly visible in the industrial neighborhood. “Those dealing with the PYD are the same ones who were profiting from the regime before,” Ali Jazo, a Kurdish poet from the village of Amuda, told Al-Monitor.

The Asayish are the newly formed Kurdish security forces, and despite having been formally created by the Supreme Kurdish Committee (SKC, the Syrian Kurdish coalition grouping all political forces founded in Erbil in July 2012), they serve as the PYD's police. This security apparatus now counts 13 branches in Syrian Kurdistan, also covering ethnically mixed cities like Qamishli. “We abide by an internal statute, which was drafted by jurists belonging to the Kurdish Supreme Committee,” said Ahmad Darwish, the Asayish spokesman in Qamishli. His office is busy addressing the complaints of those who saw their smuggled cars seized by state intelligence forces. “We register new cars brought into the country with a yellow plate,” Darwish told Al-Monitor.

“The Syrian security forces turn their eyes away. They’re aware that most of their officers are still living in Qamishli, so they don’t want to clash with us.”

However, the “jurisdiction” of the Asayish is informally limited by the presence of the regime. “We have no control over bakeries, they’re monitored by the Syrian police,” Darwish said. “On April 29, for example, we arrested one of the two culprits in gunfire that took place in front of the bakery, but the other one was taken to the state prison.” The bakery is in a contested central-eastern neighborhood.

The same fragile balance of mutual tolerance between Syrian and Kurdish institutions applies to the introduction, in November, of the teaching of the Kurdish language from elementary to high school.

“We are planning to introduce other reforms to teach Kurdish history and geography, starting next year,” Berivan Yunis, a teacher and spokeswoman for  Amuda’s Institute for Kurdish Language, told Al-Monitor.

“We began by removing the book on Baathist Pan-Arab nationalism, which used to be compulsory from elementary school until the first year of university.”

In November, Hasakah province’s education department ordered closed the schools where Kurdish was being taught, but a group of teachers kept holding classes for 40 days in defiance until a resolution was issued to allow their reopening.

The move was noted by the Kurdish school’s spokesman as a sign of changes to the Syrian school system. "We're witnessing a new openness toward Kurdish language. President Bashar al-Assad mentioned this in his last speech and the University of Damascus announced its need to hire teachers of Kurdish," Yunis said.

But not all Kurds rushed to welcome Assad’s turn on teaching Kurdish. “It’s another lie, Bashar cannot win us over by granting citizenship rights and Kurdish lessons,” objected Ibrahim Begi, one of the organizers of Amuda’s Friday protests in support of the Arab-led Free Syrian Army (FSA). “These rights are not his private property,” he told Al-Monitor.

Assad’s interview with the Syrian channel Al-Ekhbariya on April 18, where he opened up to the teaching of Kurdish, seems to frame this concession as a new attempt to win over Kurdish support and deter Turkish interference. The president also stressed his scarce trust in the success of negotiations between Turkey and the PKK, comparing Turkey’s  persecution of Kurds with Syria’s "friendly" relations with Kurdish groups.

Some analysts believe that the recent convergence between Ankara and Abdullah Ocalan will negatively affect the relations between Damascus and the PYD. "As a consequence of Ocalan's peace call, the Syrian regime is shuffling his cards and acting differently," said Bashir Malla Nawwaf, a member of the Democratic Movement Society or TAV-DEM, an umbrella Kurdish organization. "There is no agreement between us, but Damascus keeps on seeing the Kurds as an exploitable card against Turkey," he added.

The alleged use of government chemical weapons in Aleppo's Sheikh Maqsud Kurdish neighborhood and the clashes between the PYD's armed wing and loyalist forces in Qamishli seem to stand as warning signs for Kurds.

However, there is no guarantee that Ocalan's appeal will materialize into a peace treaty with Turkey. In the meantime, the PYD keeps on paving the way toward autonomy, relying on a tacit consensus with the regime.

Both Amuda’s Kurdish language school and the Asayish claim to be independent institutions void of political biases, but the picture of PKK’s Abdullah Ocalan goes hardly unnoticed on the walls and their employees master the PYD’s political language centered on "the self-administration (idara al-hukm al-dhati) of Western Kurdistan."

“We put the picture of Ocalan for his intellectual value, not as a political leader,” a PKK chief who came from the Iraqi Qandil Mountains to monitor Kurdish schools in Amuda told Al-Monitor. “Ocalan is the one who theorized the self-administration we’re implementing here.”

According to Bahzad Hajj Hammo, a Kurdish journalist writing for the Syrian weekly Jisr, the PKK fighters coming from Qandil remain the real decision-makers within the PYD, whereas locals are recruited to boost the party's popularity in Syria.

In the Asayish office, the motto below the image of Ocalan reads, “There is no life without a leader (Be Serok Jiyan Nabe),” a possibly totalitarian vision alarming some Kurds. “There is no space for independent organizations; the PYD replaced the regime by threatening dissidents,” poet Ali Jazo said. “For example, they force people to shut down shops in solidarity with the funerals of their martyrs,” he told Al-Monitor.

The members of the pro-FSA youth committees accuse the PYD of targeting them explicitly. A few days ago, Amuda activist Suwar Hatto was run over by a car allegedly driven by party members. “If you hit Suwar from the back, then you know we’re ahead of you” was a banner displayed Friday by the committees.

Some Kurdish politicians, however, belittle the threat posed by the followers of Abdullah Ocalan, and insist on the value of the autonomous institutions they have set up over the last year. “We chose not to confront the PYD to avoid intra-Kurdish strife,” Salman Hasso, member of the Kurdish Democratic Progressive Party’s political bureau, told Al-Monitor. “In the end, they have laid the foundations for numerous institutions which we will all benefit from.”

Andrea Glioti is a freelance journalist who covered the first five months of the Syrian uprising from within the country. His works have been published in AP, IRIN News, OpenDemocracy, The Daily Star (Lebanon), New Internationalist and numerous Italian and German newspapers. He also served as an Internews consultant on Syrian media in 2012.