Turkish Foreign Minister Ahmet Davutoglu visited Moscow this week, where he found some common ground with the Russian government on Gulen, while continuing to disagree on Syria. 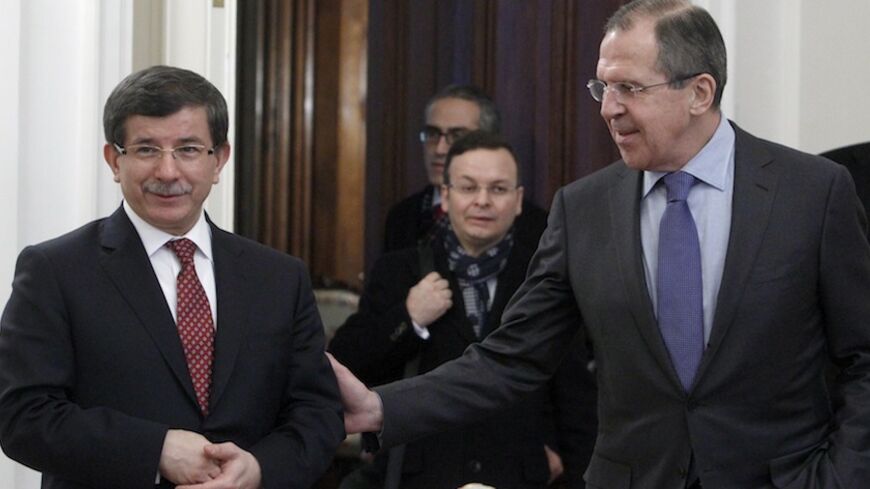 Relations between Russia and Turkey today remain stable and friendly, despite being severely tested by the Syrian crisis and the deterioration of Russia's ties with the West due to the events in Ukraine.

According to Russian Turkey experts Natalia Ulchenko and Pavel Shlykov, "in the current format, relations between Moscow and Ankara have reached their ‘growth limits’: The current model of mainly economic cooperation has largely exhausted itself, while the potential for collaboration on political issues remains untapped." Thus, the situation around Syria has taken "the trust deficit to a whole new level." So, can Moscow keep up the momentum in its dealings with Ankara, or will existing differences cause significant damage?

One of the main issues on the agenda for the talks between Russian Foreign Minister Sergey Lavrov and his Turkish counterpart Ahmet Davutoglu, held during the latter’s visit to Moscow in late May (just after the presidential elections in Ukraine), was Crimea. Although Turkey has not recognized the legality of Russia's annexation of Crimea, the Turkish foreign minister has pointed to the positive side of this move. Turkey, where nearly 5 million descendants of the Crimean Tatars live, is not indifferent to the fate of their kinsmen in Crimea. As was reported, Davutoglu intended to speak in favor of the fact that they "should benefit from rights of autonomy like when they were under Ukrainian administration." It was still unclear, however, to which rights of autonomy the Turkish foreign minister was referring.

During his visit, Davutoglu emphasized that Turkey considers the Crimean Tatars "the indigenous population of the peninsula," noting its "multi-cultural structure." His statement was therefore significant, that "a revival of Cold War behaviors in the world and specifically in the Black Sea basin would not serve any country’s interest." The Turkish foreign minister received, with obvious approval, Lavrov's statement that "for the preservation of the Crimean Tatar culture, centres, schools and theatres will be opened." Lavrov’s remarks that both parties should assess the problems in Ukraine and Syria on the basis of mutual understanding imply that while disagreements remain, they are unlikely to spill over into an open polemic.

Incidentally, during the Ukrainian crisis both Turkish and Russian media started discussing Ankara’s possible claims on Crimea. Recall that the Crimean Khanate — once a vassal of Turkey — became independent from the Sublime Porte with the Treaty of Kuchuk Kainarji in 1774. It then came under the protectorate of the Russian Empire until finally becoming part of it in 1783. With the Treaty of Jassy in 1791, Russia secured the entire Northern Black Sea littoral, including Crimea. In 1954, some Turkish media, despite the thaw in relations between Russia and Turkey (in May 1953, Moscow had announced the withdrawal of territorial claims against Turkey, put forward after the Second World War), considered the February 19 transfer of Crimea by the USSR leadership from the Russian Soviet Federative Socialist Republic to the Ukrainian SSR a violation of the Russian-Turkish agreement reached a century and a half earlier. Turkish authorities did not officially react, however.

In the new reality, as I can tell from the results of the visit, the Crimean problem not only didn't poison Russian-Turkish relations, but has even revealed some new prospects for cooperation, taking into account long-term Turkish interests and concerns. Thus, Russian officials, commenting on the outcome of the talks, paid special attention to the energy cooperation between the two countries. According to Lavrov, Russia and Turkey noted that the implementation of the South Stream pipeline project and the construction of Turkey's first nuclear power plant, Akkuyu, are progressing well. Russian State Duma Speaker Sergey Naryshkin stated that the laying of this pipeline through Serbia and Bulgaria is on schedule: the pipeline will be built through Serbia during 2014, while the first gas delivery will flow through it in 2016.

Paradoxically, what today promotes the rapprochement between Russia and Turkey is Moscow’s extremely negative attitude toward the activities and ideas of Fethullah Gulen. In the past, when Turkish Prime Minister Recep Tayyip Erdogan and his Justice and Development Party (AKP) were allied with the leader of this Islamic sect — which is taking root in many countries around the world and in which a significant portion of Turkey’s population is involved, including prominent officials and, in particular, members of the security structures and the judges — Moscow’s position acted as an irritant for Ankara. Now, however, with the Cold War flaring up between the leader of the AKP and Gulen, who resides in the United States, Moscow’s position creates an interest in joint actions to limit his influence. Recall that all Gulenist schools have been closed in Russia, and in 2012 numerous books by this ideologue were included in the federal list of extremist literature by a Russian court decision.

Yet, in Russian public opinion the attitude toward Gulen as an ideologue is ambiguous. This can be convincingly illustrated, in particular, by the assessments included in a paper by an associate at the influential Russian Institute for Strategic Studies, Vasily Ivanov, entitled "Fethullah Gulen’s Movement: an extremist organization masquerading as supporters of ‘the dialogue of civilizations.’" The author believes that Gulen’s sect "glamorizes the idea of armed jihad." He lashes out at those Russian experts who try to "position Gulen as a pacifist and even as a supporter of the idea of ‘non-violent resistance to evil.’" Examining the interview – "distributed by the Gulenists" — with Russian expert in Islamic studies and professor at the Higher School of Economics Leonid Syukiyaynen, Ivanov writes that in it the leader of the sect "is disingenuously compared with the Indian philosopher Mahatma Gandhi, and it is deceitfully claimed that ‘between Gulen and Gandhi there exists a similarity in rejecting all kinds of violence.’"

It should be noted that, even before the split between his supporters and the AKP, Gulen’s rejection was shared by many Western and Turkish authors who raised concerns over the Islamization of Turkey and the prospect of losing the secular nature of the state as inscribed in the constitution. Thus, Rachel Sharon-Krespin from the Middle East Media Research Institute wrote in 2009: "Today, Turkey has over 85,000 active mosques, one for every 350 citizens — compared to one hospital for every 60,000 citizens — the highest number per capita in the world and, with 90,000 imams, more imams than doctors or teachers." She drew attention to the danger of Gulen’s activities for Western societies, citing as an example a television appearance by five former Dutch teachers at Gulenist schools, in which they declared that "the Gulen community was moving step-by-step to topple the secular order."

Russian analysts paid attention to reports that a Turkish court recently issued an arrest warrant for — and requested that Interpol detain — a group of senior Israeli army personnel involved in the killing of nine Turkish citizens on board the Mavi Marmara ferryboat, which was carrying humanitarian aid to the people of Gaza. They are then-Israeli Chief of Staff Gabriel Ashkenazi, navy commander Eliezer Marom, chief of military intelligence Amos Yadlin and air force intelligence chief Avishai Levi. Referring to inside sources, Rasim Ozan Kutahyali — a columnist for Al-Monitor — claims that the Gulen movement was behind this move, as it strives to spoil Erdogan’s game as he has begun the process of normalizing relations with Israel.

What seems to be important for mutual understanding between Russia and Turkey is Ankara’s desire to develop relations with Orthodox Serbia, something in which Belgrade is also expressing a clear interest. Turkey has shown solidarity with the people of this country — who were subjected, like Bosnia and Herzegovina (and, to a lesser extent, Croatia), to the most destructive floods in history — by providing Serbs with financial and other material assistance. A large share of material assistance, as is known, was given by Russia, which also actively participated in the evacuation of those affected.