Russia hopes to assure Turkish neutrality and understanding in dealing with the Crimea Peninsula. 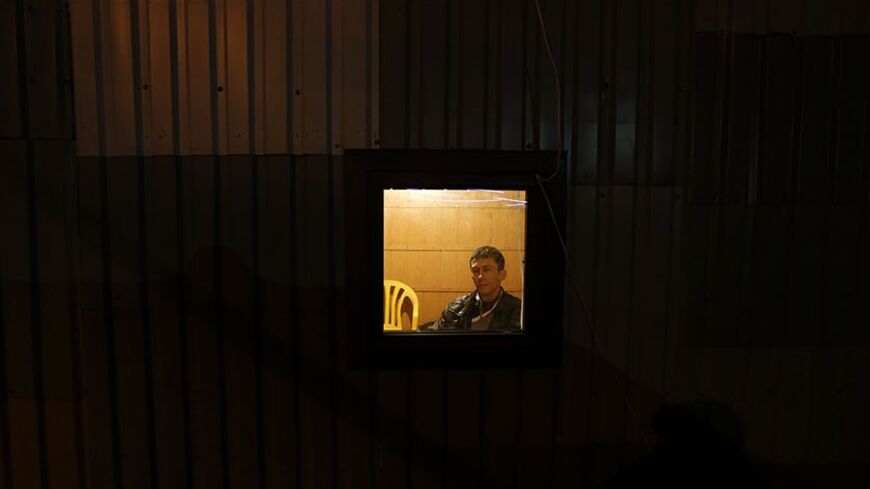 A member of the local Crimean Tatar community looks out of a makeshift shelter to keep watch against pro-Russian supporters near their houses on the outskirts of Simferopol, March 9, 2014. - REUTERS/Vasily Fedosenko

Many comments have been published about the outcomes of the Ukraine-Crimea crisis and Russia’s policy toward it with respect to the existing crises in the Middle East — Syria, Iran and Israel-Palestine. A lot has been said about a possible shift in Russia’s approach toward cooperation with the West, which is intensifying pressure on Moscow.

But one of the main repercussions of the recent developments in Ukraine — especially the secession referendum in the Crimea set by the local authorities for March 16 — directly and strongly affects Turkey and the Turkey-Russia relationship. It is partially related to the local Tatars.

About 250,000 Tatars live in the Crimea, around 12-13% of the overall population of which roughly 60% are ethnic Russians (80% of all Crimeans are Russian-speakers). The present-day number of Tatars in the Crimea is a bit more than the number of those who lived there in 1944, when all Tatars and several other ethnic groups were deported following Stalin’s orders. Ten years later, in 1954, then-Prime Minister Nikita Khrushchev transferred the Crimea from the Russian Federation to Ukraine. During World War II, the Tatars were accused of collaboration with the Nazis, who occupied the peninsula from 1941-1944. According to the official data provided by authorities, about 10,000 served in the German army and another 10,000 in the German police force. At the same time, there were famous Tatar war heroes in the Red Army, including two generals, who fought against the Nazis. Only under Khrushchev were all the Tatars rehabilitated, although they were not allowed to settle back in the Crimea much until later, under Mikhail Gorbachev.

But the majority of the Crimean Tatars now live in Turkey. The overall number of the descendants of the Tatar refugees who had come to Turkey in waves beinning in 1783 — when the territory of the Crimean Khanate was occupied by Russia, which had just won the war against the Ottoman Empire — is estimated today at approximately 5 million. Many obtained a high social status, having risen to the ranks of ministers, parliamentarians, wealthy businessmen, generals, and professors.

That is the reason why Ankara, I believe, cannot be indifferent toward the recent turbulent developments in the Crimea and its surroundings, especially given the growing internal power struggle several weeks before the start of a new electoral cycle. The Turkish leadership is clearly trying to simultaneously pursue two goals. The first is to preserve and further develop friendly cooperative relations with Moscow and avoid anything that could harm them, given the exclusively high interdependence between the two states. The second is to gain support and trust of the Turks of Crimean origin who are sympathetic to the aspirations of their kin in the Crimea (leave aside the existing baseless speculations about Ankara’s pan-Turkic or expansionist designs related to the Crimean crisis). As one of my Turkish interlocutors said, many of them still have bad memories of World War II deportations and mistrust Russians. There are some Tatar politicians who still dream of the re-emergence of centuries-old Tatar statehood/autonomy in the Crimea.

From Moscow’s angle, it is also essential to achieve an understanding with Turkey about the Ukraine-Crimea crisis. It would like Ankara to either be supportive of the plans of the Crimean present-day government to hold a referendum and secede from Ukraine, or at least remain neutral and not join actions hostile to Moscow as planned by the West in case the peninsula joins the Russian Federation. I believe that both Moscow and the authorities in the Crimea understand the complexity of taking sides for Turkey, which is a member of the NATO alliance. In that context, a lot of attention is being paid now to bringing the Tatars to the side of the Crimean Russia-oriented leaders.

Until now, the head of the Mejlis (Council) of Crimean Tatars, Refat Chubarov, has been a firm supporter of the Maidan. He is saying that Kiev’s Rada is the only legitimate power in Ukraine and that there currently is no legitimate organ in the Crimea. In his words, the Mejlis is going to boycott the forthcoming referendum and is requesting an armed UN peacekeeping force to be deployed in the Crimean Peninsula. But this council does not represent all the peninsula's Tatars. Deputy Prime Minister Rustam Temirgaliev, an ethnic Tatar, has been trying to convince the local Tatar community to participate in the referendum and has been explaining the power-sharing strategy of his government. The prime minister proposed to legally guarantee Tatars the posts of deputy prime minister, two ministers, and deputies in all ministries, and post in law enforcement structures as well as a quota in parliament; he also promised to allocate $22 million in 2014 for the settlement of the returning Tatars.

In Sevastopol, local authorities have already printed ballots for the referendum planned for March 16 in the three languages — Russian, Tatar and Ukrainian — that new Crimean leaders say will be equally official. Contrasting with the linguistic intolerance of the Maidan, especially with extreme nationalist groups such as the Right Sector, it is designed to make the Crimean leadership attractive, even for those Tatars who are not friendly to Russia but who are scared by the behavior and rhetoric of the extremists in Kiev. Needless to say, these measures are undertaken also for the sake of appeasing Ankara. Some analysts here even believe that it has been done following advice of the Turkish leaders. There is hope in the Russian political circles that Turkey will prefer a balanced approach toward the unfolding crisis given its interests in developing cooperation with Russia rather than being a spoiler. Despite Turkish Foreign Minister Ahmet Davutoglu’s statements, Turkey in fact might even be interested in Russia’s reunion with the Crimea given possible new economic opportunities for businesses there.

Moscow’s concern in striking a deal with the Crimean Tatars is also related to the growing influence of extremist networks there. Hizb at-Tahrir al-Islami, banned in Russia, has been quite active in the peninsula. A number of Tatars from the Belogorsk region have been recruited to fight against President Bashar al-Assad’s forces in Syria; Abdulla Jepparov from the Sary-Su village has been killed there, and his compatriots are still part of the Syrian conflict. A Tatar interlocutor told me that the mercenaries are first brought to Lebanon for training.

Everything will depend on what decision Russian President Vladimir Putin makes when he receives the official results of the Crimean referendum (so far the decision has not been made yet). But one has to bear in mind that due to Putin's widely supported assertive behavior toward the recent Ukrainian crisis aimed at protecting Russia’s national interests, his rating in Russia has substantially grown and approached almost 70%. In the view of most Russian analysts direct Western interference in Ukraine, clear double standards, growing hostilities toward Moscow and humiliating threats by Western capitals have only contributed to this result. Pressures and threats will not work. It will be a real loss for all of us if the Middle East becomes a victim of a new conflict between the West and Russia, this time over Ukraine.