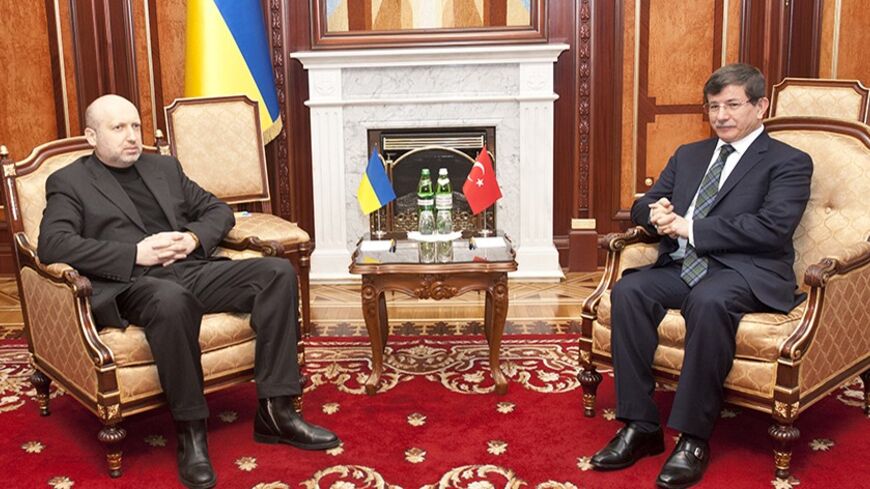 Russia’s seizure of Crimea is a harbinger of a new Cold War that leaves Turkey facing complex situations on a number of fronts, requiring careful diplomatic and political management. Whether Ankara can rise to the occasion given that the government of Prime Minister Recep Tayyip Erdogan is up to its neck in what it sees as a war of survival against its political enemies at home remains an open question.

No matter how tense the domestic situation may be, though, this is not a crisis that Turkey can afford to ignore or overlook, even if its ability to influence the course of events is limited, if indeed it exists at all.

Foreign Minister Ahmet Davutoglu has nevertheless spelled out Ankara’s “bottom line” as far as the legal position is concerned over the way Russia wrested the Crimean Peninsula from Ukraine’s control, and this is largely in tune with the position of the West.

Davutoglu’s remarks reflect ambivalence with regard to Russia, a superpower Turkey cannot afford to alienate without ultimately harming its own strategic security and economic interests.

Addressing a news conference in Ankara earlier this week with Mustafa Kirimoglu, the former head of the Crimean Tatar Mejlis (parliament) and now a deputy in the Ukrainian parliament, Davutoglu attempted to sound a firm note when he said the recent referendum in Crimea on the region’s status was a fait accompli that lacked legitimacy.

When asked, however, what steps Turkey would take if Moscow insisted on annexing Crimea, Davutoglu was circumspect. He pointed out that although Turkey is a NATO member there were factors that placed it in a different position to other members of the Western community.

“Turkey is the only country that is a neighbor to both Ukraine and Russia. At the same time, it has a direct maritime link to Crimea. Therefore, it is very important that we should feel more concern than any other country and aim for strategic diplomacy,” he said.

Despite his underlining of Turkey’s unique placing in this crisis, Davutoglu nevertheless signaled that rather than acting unilaterally, or trying to solve the problem bilaterally with Moscow, Ankara would maintain close consultations with its partners in the European Union and its NATO allies over this crisis.

His remarks indicated once again that when it comes to international crises, especially ones that raise the specter of a new cold war that involves Russia and the West, Turkey is more than likely to throw its lot in with its traditional allies.

Davutoglu’s remarks also reveal the hope that Turkey’s Western allies will have an understanding of the delicate situation Turkey is in vis-a-vis Russia, and therefore not leave Ankara facing harder choices than it already finds itself facing.

All of this provides further evidence that Erdogan’s initial ambitions of making Turkey a key regional player — an ambition that already received a serious set of blows in the Middle East following the Arab Spring — is a thing of the past.

Put another way, the “revenge of geography,” to use Robert D. Kaplan’s term, is forcing Ankara to return to Turkey’s traditionally cautious diplomacy, based on a preference for multilateralism, while it maintains and deepens security arrangements with the West.

This traditional line also provides Turkey with more clout than it would have if it were acting as a lone wolf facing the Russian bear, and this can already be discernible in the attempts by Moscow to court Ankara through the Crimean Tatars.

Under normal circumstances Russians have little love lost on the Tatars, due to historic memories that stretch as far back as the Crimean War of 1853-56 and further, but mainly because their collective notion of the Tatars as a nation that betrayed them to the Nazi’s in World War II.

It's telling, therefore, that Crimea's pro-Russian authorities are reportedly saying now that they will guarantee Tatar representation in Crimea, and give this Turkic and Muslim community proper land ownership rights and financial aid.

Vitaly Naumkin summarizes Russian expectations in his March 19 Al-Monitor article well, when he indicates that Russia's relations with Turkey will now be particularly important to Moscow: “The efforts to provide housing assistance to Tatar repatriates in Crimea, after years of being forced to live in shacks, will surely win the approval of the influential Crimean Tatar community in Turkey. Given Turkey's geographic position and its interests in the Black Sea Basin, attractive proposals could be made for it to participate in economic development projects in Crimea, whose economy has been in free fall over the past two decades.”

Not surprisingly, though, Crimean Tatars, having suffered a great deal under the Russians in the past, remain wary of such enticements and would clearly prefer to remain with Ukraine.

Russia’s reaching out to the Tatars in this way, even if it ultimately lacks credibility, nevertheless provides Ankara with a reason to try and engage Moscow on the question of Tatar rights. It is clear that any advances Ankara can help secure in this regard will also help Erdogan ward off domestic criticism from nationalist quarters that are already blaming his government of standing idly as the Tatars are put in peril.

In terms of the big picture, however, Russia’s “Crimea grab” has Turkish diplomats worried over much more than just the welfare of the Tatars, and Davutoglu gave plenty of hints about this during his news conference with Kirimoglu this week.

Warning about a “domino effect” as a result of the fait accompli in Crimea, Davutoglu pronounced Azerbaijan, Georgia and Moldova by name in this regard, saying that the territorial integrity of these countries can not be placed at risk by means of any referendum. “Once you allow this, the whole region will become unstable,” Davutoglu said, thanking the Crimean Tatars for boycotting the March 16 referendum.

Naumkin’s remarks in his March 19 Al-Monitor article, in which he argues that the events in Crimea will provide “impetus to self-determination movements” around the world, going on to suggest that the Kurds will also react to these events also provides a clear hint as to why Ankara is concerned.

In addition to all this, Russia’s return to the Middle East — following what it sees as its major success in Crimea — as an even more assertive power than it already is will also affect Ankara’s policies toward the region. It is no surprise that Syria’s President Bashar al-Assad — Erdogan’s nemesis — is making no secret of his joy over developments relating to Crimea.

Meanwhile, an anti-Western Russia that yields clout in the Middle East will also provide Egypt’s military rulers — who are the object of much vilification by Erdogan — with fresh options against the West should Europe and the United States pressurize them on the basis of democratic arguments.

Egyptian Defense Minister Abdel Fattah al-Sisi has already laid the initial groundwork for strategic cooperation between Egypt and Russia, when he visited Moscow in February and was given a warm welcome by Russian President Vladimir Putin.

All of these developments weaken the Erdogan government’s hand, while strengthening the position of Russia’s allies and friends in the Middle East, who also happen to be Erdogan’s enemies. In essence, the general picture for Ankara, following the Crimean crisis, does not look good and will indeed require “strategic diplomacy,” to use Davutoglu’s words.