Turkey boxed in by Russian moves in Crimea 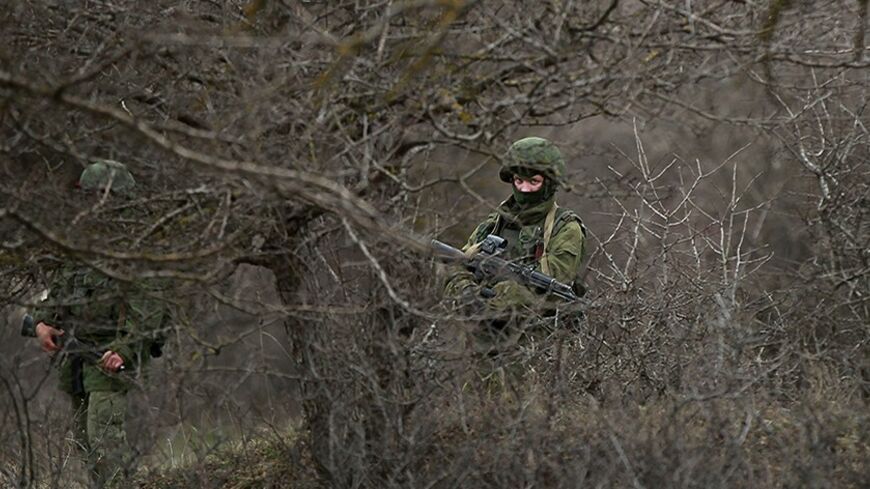 Military personnel, believed to be Russian servicemen, stand guard outside the territory of a Ukrainian military unit in the village of Perevalnoye outside Simferopol, March 4, 2014. - REUTERS/David Mdzinarishvili

The dangerous standoff in Ukraine between Russia and the West is reminding Turks once again of their volatile neighborhood, where unexpected developments can alter the geostrategic equation unexpectedly, leaving Turkey facing difficult choices and decisions overnight. These events are also showing just how interconnected developments in this part of the world are when superpower rivalry is concerned.

Rising tensions between the United States and Russia over Ukraine will most likely make the Syrian crisis more intractable and increase Turkey’s Syrian headache while Moscow positions itself more firmly behind Syrian President Bashar al-Assad, keeping in mind its naval base in Tartus and military ties with the Baathist regime.

The developing situation in the Crimean peninsula also has potential domestic ramifications for Turkey due to the close ties of kinship between Turks and Crimean Tatars. This issue can add fuel to an already tense political environment in Turkey, where the government is fighting serious corruption charges.

The opposition is likely to use the situation in Crimea to hit at the ruling Justice and Development Party (AKP) by alleging passivity by the government as the tide turns against the Tatars, many of whom have relatives in Turkey.

Turkey today has no legal claims over Crimea, of course — even if it was once part of the Ottoman Empire — other than a moral concern for the welfare of the Tatars. “The Khanate of Crimea” was lost to Russia in the war of 1768-1774.

Crimea, however, continues to hold an important part in Turkish nationalist lore, being the birthplace of some of the most prominent ideologues of 20th-century Turkish nationalism and Pan-Turkism; these include Ismail Gaspirali (Gasprinski) and Yusuf Akcura.

According to the 2001 census, only 12% of Crimea’s population is made up of Tatars today, while 58% is Russian and 24% Ukrainian. The Tatars were mercilessly deported by Stalin to Central Asia following World War II on the grounds that they collaborated with Nazi Germany.

They were gradually allowed to return after the collapse of the Soviet Union, but continue to have sensitive relations with the Russians in particular, not only because of memories of World War II but also because of their Islamic identity.

Tatars have thrown in their lot with pro-European Ukrainians in the current crisis and are deeply worried about Moscow’s intentions. The presence of the Soviet-era Russian naval base in Sevastopol in Crimea makes matters worse for both Tatars and Ukrainians, given that Moscow is unlikely to give this strategic base up.

Ankara is concerned that if matters get out of hand, the Tatars will be the first to suffer. Such an outcome would create international as well as domestic problems for the government of Prime Minister Recep Tayyip Erdogan at a time when it is embroiled in a tense political war at home and has little time to spare for foreign policy issues.

It was no surprise, therefore, that Foreign Minister Ahmet Davutoglu rushed to Kiev on Feb. 28 for unscheduled talks with acting President Oleksandr Turchynov, Prime Minister Arseniy Yatsenyuk and Deputy Foreign Minister Andriy Deshchytsia to get a better understanding of the situation in Ukraine.

Davutoglu also met in Kiev with Mustafa Abdulcemil Kirimioglu, the former head of the National Tatar Parliament in Crimea and a veteran fighter for Tatar rights since the Soviet era, to better gauge the situation in Crimea and where it might lead.

Tellingly, however, Davutoglu refrained from accusing Russia directly while in Kiev, despite the strong condemnation of Moscow’s actions in Crimea from the United States and Turkey’s other Western NATO allies.

He restricted his remarks during his joint news conference with Deshchytsia to friendly generalities, thus reflecting the highly delicate situation Ankara finds itself in, not only because of its extensive economic and energy ties with Russia, but also because of Russia’s superpower status.

“Let’s keep the Crimean Peninsula as a peninsula of peace and mutual welfare. All groups should coexist peacefully. It is of great importance for us that Crimean Tatars live in peace together with other groups in Crimea as equal citizens within the unity of Ukraine,” Davutoglu said.

He added, “Turkey is ready to provide every support for the bright future of both Ukraine and Crimea.” Turkish Foreign Ministry sources are aware, however, that Turkey is not in a position to do much for the Crimean Tatars at the present time.

What the Tatars expect from Ankara was nevertheless spelled out by Rifat Chubarov, the head of the National Tatar Parliament in Crimea, during an interview with the daily Hurriyet on March 4.

“Turkey is a very important economic partner for the Russian Federation. Erdogan’s relations with Putin are very good. This is why I say if Erdogan calls him, it might be useful,” Chubarov said.

“He should talk about the situation of the Crimean Tatars. We want the Crimean peninsula to remain as an autonomous republic within Ukraine where the ethnic Russians, ethnic Ukrainians and Tatars have rights. We don’t want the border to change,” Chubarov added.

Whether Erdogan has that much influence over Putin in a matter that has become a national cause for Russia as well is an open question. Ankara is more likely at this stage to take a wait-and-see stance to see first how the standoff between Washington and Moscow plays out.

Turkey and Russia have been at serious loggerheads over Syria, supporting different sides in the civil war, but the two countries have not allowed this to cause tensions in bilateral ties to date. Turkey has also responded cautiously in the past to crises like the ones in Chechnya, despite strong pro-Chechen and anti-Russian sentiments among Turkish nationalists.

Western diplomats in Ankara said Davutoglu’s remarks in Kiev also show that Turkey has no intention at this stage of getting involved in the Ukraine crisis unilaterally, and will act together with its Western allies, to whom it will leave the hard condemnations of Moscow.

Diplomats also pointed out, however, that if there were an East-West-type escalation over Crimea reminiscent of the Cold War years, then Turkey might find its delicate balancing act increasingly difficult to sustain, given that it is a NATO member.

Diplomats say there is also the distinct possibility that Crimea will effectively be left to Russia in the long run, given that it is inconceivable that Moscow will let Crimea go. This, they say, might be the price to be paid for de-escalating the standoff between Russia and the West if it reached truly dangerous proportions.

If that is the case, there is no doubt that the Crimean Tatars will be the main losers in this crisis while Turkey looks on. With so much uncertainty in the air, Turkish President Abdullah Gul felt the need to hold an emergency session with Davutoglu on March 3 to try to gain a better understanding of what Turkey's options are in this developing crisis.

It is clear, however, that Turkey has more questions than answers at this stage, and remains uncertain as to how it should position itself while the situation in Crimea continues to unfold on a daily, if not hourly basis. Cleary, there is much more to this story to come in the coming days and weeks.