In a video leaked online, the commander of the Revolutionary Guard Corps said that the return of the Reformists during the 2009 elections was a "red line" for the organization. 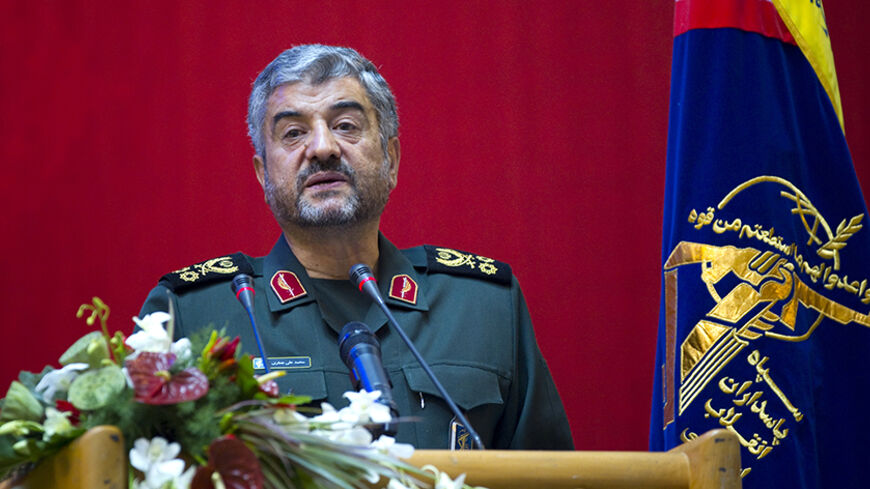 A video leaked online of the commander of Iran’s Revolutionary Guard saying that the Reformists' return to power in the 2009 elections was a “red line” for them is proof of election fraud, some are saying.

Mohammad Nourizad, one of Iran’s most outspoken politician dissidents, uploaded to his Facebook page an edited video of the commander of the Revolutionary Guard, Mohammad Ali Jafari, discussing the 2009 elections and the subsequent crackdown on protests. The video has been shared over 4,000 times.

In the video, Jafari is seen sitting on a stage behind a large desk, addressing other commanders in an auditorium. Sitting front and center is Supreme Leader Ayatollah Ali Khamenei’s representative to the Revolutionary Guard, Ali Saeedi. In an interview with BBC Persian, Nourizad said that the entire video is in his possession, but he did not know the date of the speech.

“The sensitivity of the [2009] presidential elections is clear for all of you,” Jafari says at the beginning of the approximately five-minute Facebook video. “The concern and worry that existed, and the red line that existed for the forces of the revolution, is again the return of those opposed to the revolution and the values of the revolution, that during the 2nd of Khordad found an opportunity and penetrated the government, for them to return to power once again.”

By “2nd of Khordad,” Jafari was referring to the 1997 election won by Reformist President Mohammad Khatami in a landslide victory. Khatami brought into his a cabinet a number of Reformist figures, who pushed many of the political and cultural boundaries of the Islamic Republic beyond the point conservatives could handle. The fissures inside the government became so deep that Khatami’s Culture Minister Ata’ollah Mohajerani was forced to resign, the Revolutionary Guard Corps (Sepah) signed a letter to Khatami warning him that its patience was running out and Ayatollah Khamenei condemned some newspapers as serving as the "base of the enemy." There was also an assassination attempt on prominent Reformist theoretician Saeed Hajjarian that left him partially paralyzed.

During the 2009 elections, lead Reformist candidate Mir Hussein Mousavi was close to many Reformist figures and relied on their base for support. In comparison, during the campaign for the 2013 election, then-candidate and current President Hassan Rouhani publicly stated that he would not bring “extreme” figures in his cabinet, whether conservative or Reformist.

Jafari said that the Reformists had planned their return through Mousavi, saying, “In these elections and the events afterward, it became clear why they insisted so much that Sepah and Basij and the security forces should not interfere in the elections. That the [Revolutionary Guard] shouldn’t interfere so that they could their thing … This pattern was so worrying that everyone assessed that if this process continued, the elections would go to the second round and in the second round, it was not clear what the result would be.”

If any candidate had failed to receive 50% of the vote, the elections would have entered a second round. Mahmoud Ahmadinejad won the 2009 presidential elections with over 62% of the vote. Candidates Mousavi and Mehdi Karroubi, who, along with Mousavi’s wife Zahra Rahnavard are currently under house arrest, contested the results.

Jafari said that after Khamenei condemned the protests in his post-election Friday prayer address, the security forces decided to end the protests, which had been peaceful up to that point. He added that once they confronted the protesters, the demonstrations quickly came to an end because many of them were from North Tehran and that they would not “tolerate difficulty.”

Jafari gave two main reasons why the crisis was put to an end. One was the “widespread arrests” of those planning and instigating the protests. The other was the confrontation with the security forces during one of the early protests. Jafari said that the Revolutionary Guard, along with Basij and security forces, had a hand in both of these factors.