Whether leaked by enemies of the Islamic Revolutionary Guard Corps (IRGC) or the IRGC itself, the video revealing statements by the IRGC commander about preventing the election of Reformists in 2009 may reveal cracks in the regime’s leadership. 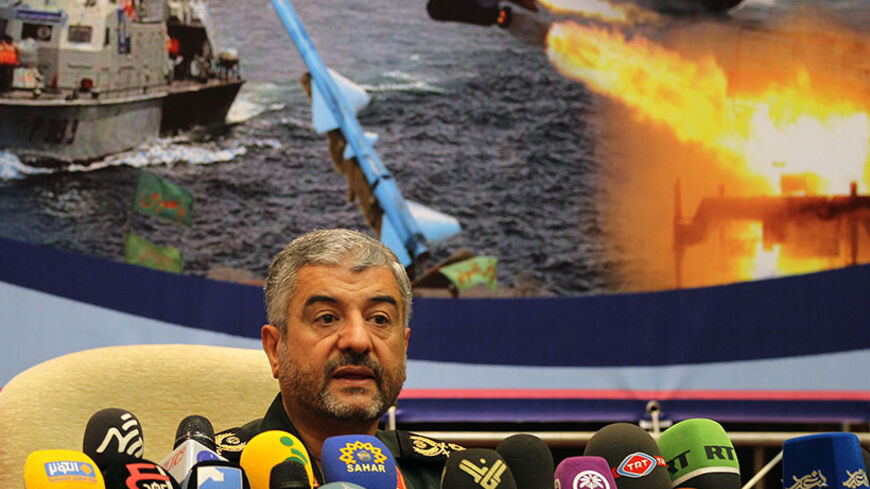 What many suspected before, that Iran's 2009 elections were a sham, seems no longer to be in dispute.

The proof came in the form of a leaked video in which Mohammad Ali Jafari, the commander of the Islamic Revolutionary Guard Corps (IRGC), stated that the victory of the Reformists in the 2009 elections and their return to power was a “red line,” and how and why it was prevented.

But that was in 2009. Five years have passed. Mahmoud Ahmadinejad is no longer president. Will the release of such a controversial video really have an impact on Iranian politics?

The answer is no, at least not on the surface.

One of the immediate lessons learned from these new revelations is how much power the IRGC wields, not just in the military and economic sphere but also in politics.

These new revelations also show how close the IRGC is to the supreme leader, and how much he trusts it. Let's not forget that Jafari is directly chosen and appointed as the head of the IRGC by Iran's most powerful man, Supreme Leader Ayatollah Ali Khamenei. Whatever the IRGC did in the 2009 elections would have been with the blessing of the supreme leader, if not a result of his direct instructions.

We also have to remember that the IRGC is also close to the conservative camp in Iranian politics. Many important institutions are firmly in the hands of the conservatives. These include the powerful Guardian Council, the Majles (parliament) and the all-powerful judiciary. All these bodies can affect the policies of the government, currently in the hands of the moderates, headed by President Hassan Rouhani.

Therefore, a strong military, economic and political domestic superpower such as the IRGC, which is close to the supreme leader and Iran's conservative camp, is not going to be embarrassed off its perch by the findings of the recent video. Rouhani and the Reformists can refer and hint to this video all they want, but for now it won't change a thing.

What this video does show is that underneath the surface, more cracks are appearing in the foundations of the regime.

We have to remember that the video, first published by Iranian political activist Mohammad Nourizad on his Facebook page, was supposed to have been a secret. It was not for public screening, because its contents were very controversial. A contentious video such as this didn't just fall out of the sky and land in Nourizad's lap. So how did he get hold of it?

There are at least two possibilities:

One is that a powerful person, or even a powerful group within the Iranian regime, is angry with the IRGC's involvement in Iranian politics. By releasing this video, it wanted to show the people of Iran what a destructive force this organization has been before and can be again.

The other possibility is that the IRGC deliberately sanctioned the release of this video as a warning to its rivals. To say to them: Look at how much power we have. We did all of this in 2009 and if pushed, we could do it again. So watch your step.

Either scenario would show that the infighting between different factions inside the regime is becoming more intense and nasty than we realized, so much so that they are willing to go public with such controversial information to hurt or warn off the other side: that what we are witnessing is a tip of an iceberg of differences that is surfacing.

But we have seen videos being leaked before as part of political infighting. In February 2013, then-President Ahmadinejad publicized a secretly recorded video to undermine his rival Ali Larijani. So what's so different this time?

It's one thing to fight over who is more financially corrupt. It's quite another to show evidence that an entire election was a sham, and that the voice and opinion of the people of Iran were worthless unless approved by Iran's most powerful man and most powerful military body, who were willing not just to ignore the people's voice but to use violence as well. Such revelations in the long run can be a much more direct challenge to the very legitimacy of the regime, even among its own supporters.

Judging by another speech by Jafari, the premeditated decision to intervene in the 2009 elections — if true — had consequences far more dangerous than a demonstration by a group of people from “North Tehran” who would not “tolerate difficulty,” as Jafari states in the newly leaked video.

In his public speech on Oct. 2, 2009, Jafari stated that the post-election disturbances brought the regime close “to the edge of being overthrown,” and that the disturbances were the “biggest danger to the core of the system and the Islamic revolution in the last 30 years, even more dangerous than the Iran-Iraq War.”

The revelations of this video suggest intense infighting, even more than is generally assumed. Twenty-five years after the death of Ayatollah Khomeini, the regime may be more divided now than when he was alive. It also reveals the willingness of the regime to use brute force to prevent any candidate it does not approve of from winning in elections. While these cracks inside the Iranian regime may be a warning for the long run, the IRGC, for now, still seems safe in its role.