The presence of Saeed Hajjarian, the main Reformist theoretician, has energized Reformist media. 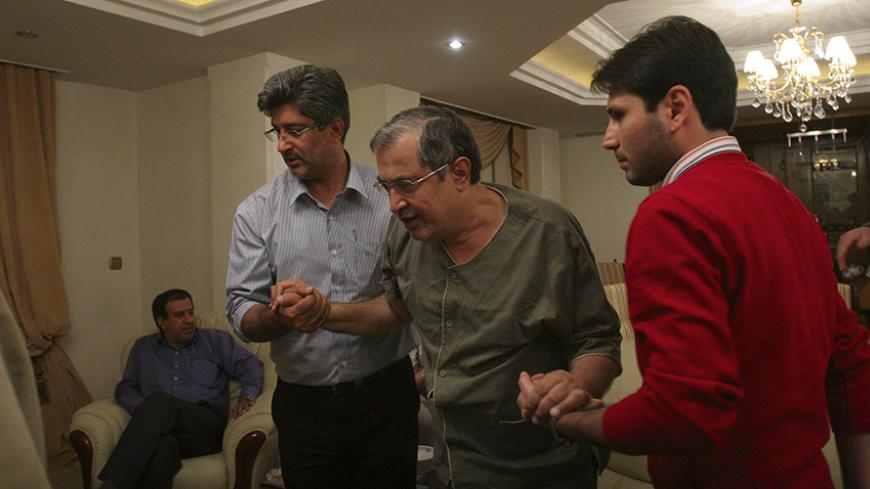 Leading Iranian Reformist Saeed Hajjarian is helped to a seat in his home after he was released from prison in Tehran, Sept. 30, 2009. - REUTERS/Yalda Moaiery/ISNA
Arash Karami
@@thekarami
May 27, 2015

Saeed Hajjarian, who is often credited with being the theoretician who introduced the Reformist movement in Iran, made headlines after speaking at Tehran University for the first time in 10 years. The importance of the appearance of the man who was left partially paralyzed from a 2000 assassination attempt cannot be overstated. Some Reformist media — after suffering what appeared to be the final blow in the contested 2009 elections and the political crackdown that ensued — are exhibiting a renewed sense of confidence over the event.

Reformist Shargh Daily wrote that Hajjarian's speech at Tehran University was important given that under the eight years of Mahmoud Ahmadinejad’s presidency and even at the beginning of Hassan Rouhani’s presidency, Hajjarian was “forbidden” from entering a college to speak. According to Shargh, in August 2014 he had even received permission to speak at Tehran University but was still prevented from doing so. But this year, in honor of Mohammad Khatami's election in 1997 that ushered in the Reformist era, Hajjarian was allowed to speak alongside political analyst Abbas Abdi.

Shargh reported that the excitement before the speech was such that seats had filled up hours before the event; there were songs by prominent musicians critical of the government’s policies and even protest chants were sung by the crowd. After Abdi spoke, Hajjarian — who has difficulty speaking since the assassination attempt — made a short speech. He praised the various student associations and then joked: “I don’t know which side the sun came up from today that I am here today. Last year they did not allow me to come but it seems things are a little better.”

Hajjarian then presented a note that was read by one of the students. It said that the 2nd of Khordad (1997) elections were the first since the 1979 revolution in which “a competition” took place, and that in fact, it “institutionalized” competition in the presidential elections, raising participation rates and introducing new discourse on the issues of religion, foreign and domestic policies and economics. But Hajjarian said those elections were an “exception” and he had a critical view of its repetition, though he did not explain why.

Hajjarian's appearance and short speech even led to speculation of the return of Reformism. Mohammad Hossein Mehrzad wrote about Hajjarian's attendance in an article titled, “The possibility of another 2nd of Khordad.”

Mehrzad wrote that the “written and live history of the Reformist era” was on display at Tehran University. By written history, he meant books and newspapers published under the Reformist era, books that pushed the boundaries of censorship and newspapers that eventually were shuttered overnight. By live history, Mehrzad meant Hajjarian himself. Mehrzad wrote that when Hajjarian — who walks with difficulty — finally entered the salon the crowd stood up, chanting, “You’re a living martyr, you’re a beating heart,” and some even had tears in their eyes.

Mehrzad wrote that there were even some surprising pictures in the salon. While he did not say it, pictures surfaced on social media showing images of the 2009 Green Movement leaders, Mir-Hossein Mousavi, Zahra Rahnavard and Mehdi Karroubi on stage.