Iranian officials respond to the fall of Mosul to the Islamic State of Iraq and al-Sham extremists. 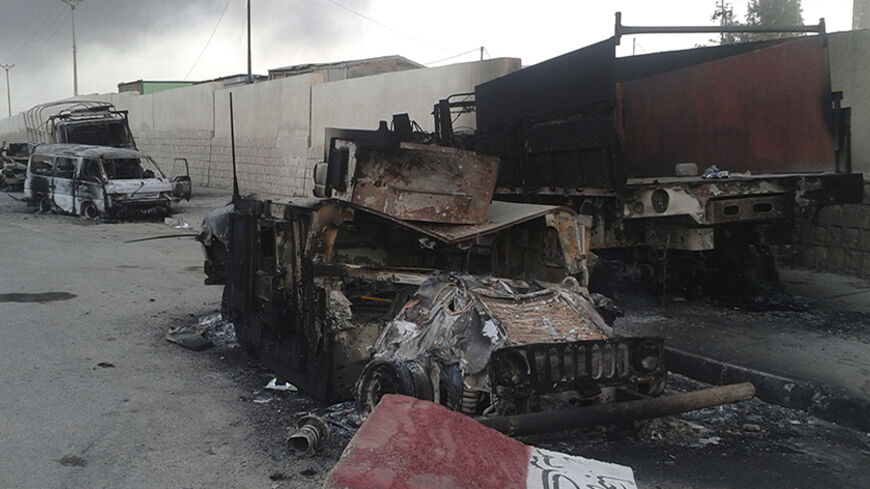 Burned vehicles are seen during clashes between Iraqi security forces and the Islamic State of Iraq and al-Sham in the northern Iraq city of Mosul, June 10, 2014. - REUTERS
Arash Karami
@@thekarami
June 11, 2014

Ali Shamkhani, the secretary of Iran’s Supreme National Security Council, addressed the victories of the Islamic State of Iraq and al-Sham (ISIS) against a fleeing Iraqi military in a meeting with Syria’s ambassador to Iran. “The expansion of terrorist elements of [ISIS] and their violent acts in Iraq was a warning for the region,” Shamkhani said. “There is a need for attention and action from governments and the international community.”

Without naming names, Shamkhani said that those who support these terrorist groups would eventually be affected by them as well.

Iran’s Foreign Ministry spokesperson Marzieh Afkham condemned the ISIS attacks in Mosul, calling them a danger that reaches beyond Iraq’s borders. “The threat to the world of terrorism requires governments and the international community, in the current dangerous situation, to stand with the people of Iraq,” said Afkham. She expressed Iran’s readiness to help the Iraqi people and the Iraqi government in confronting terrorism.

Ismael Kowsari, a member of the Iranian Parliament’s National Security and Foreign Policy Committee, said that the ISIS victories were not a direct threat to Iran, but would cause the disintegration of Iraq. “[ISIS] is after the goals of its supporters and Israel, and their goals are to cause differences and disintegrate Iraq,” Kowsari said. He called on Iraq’s neighbors to help secure the country’s territorial integrity.

News that this religiously and ethnically mixed city had fallen into the hands of some of the most extreme Sunni militants, causing approximately 500,000 to flee, concerns Iranians of all stripes. Mosul is in the western Iraqi province of Ninevah, which shares a 300-mile border with Syria. Iran has spent considerable political and economic capital to support Syrian President Bashar al-Assad against the rebels and militants. The victory of militants with purported backing of former Baathists has also sparked bitter memories of those who remember Iran’s eight-year war with Iraq.

Liberal religious blogger Ali-Ashraf Fathi wrote a note on Facebook in response to the ISIS attack that was shared widely and surprised with its strong tone. “The savages of [ISIS] who have become the inheritors of the Baathists in Iraq — and it is not clear which Western or Eastern country supports them — after an unsuccessful attack in Samarra, their destination is to attack the shrines in Najaf and Karbala,” he wrote. “The news is extremely worrying. If the Iraqi government cannot control the holy shrines and the defenseless people of Iraq, it is a duty of all Shiites and Iran to take action to prevent the desecration of holy shrines.” He added that the situation in Iraq is different from protecting an individual such as Assad in Syria. He asked that if the Iraqi government is unable to take action, that the Iranian government should begin accepting volunteers.