Saudi Arabia and the United Arab Emirates have formed a joint committee to coordinate their regional efforts, with Egypt and Libya topping the agenda. 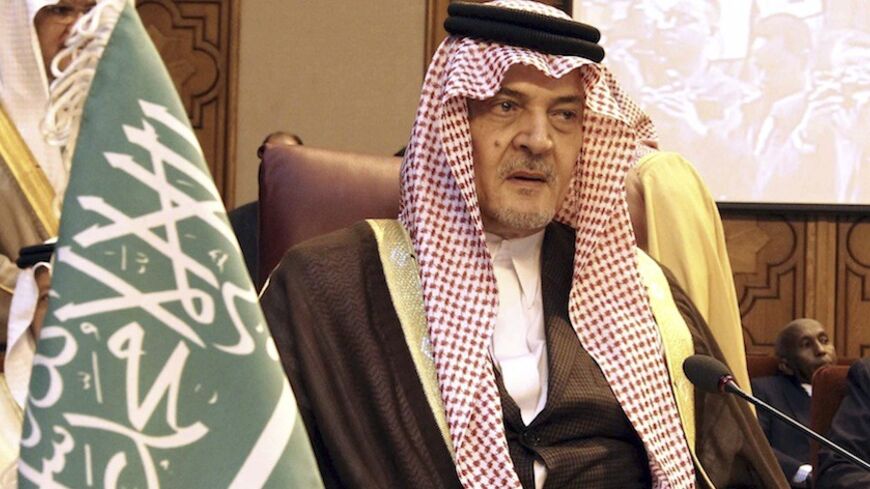 Saudi Foreign Minister Prince Saud al-Faisal, accompanied by an official Saudi delegation that included Interior Minister Prince Mohammed bin Nayef, visited the United Arab Emirates (UAE) on May 20. The visit resulted in a declaration to establish a joint high committee for the two countries to manage their foreign policies and confront the challenges facing the region, according to a report by the Emirati WAM news agency.

London-based Al-Arab newspaper reported that the presence of the Saudi interior minister during the visit sent a message that there are no internal Saudi differences in Saudi Arabia’s position toward Qatar, as many Qataris claim.

The establishment of a joint committee between the two Gulf states to meet the region’s challenges means that the Gulf Cooperation Council (GCC), as a system of collective action, is no longer able to carry out this role. Its member states — Qatar on one side and Saudi Arabia and the UAE on the other — continue to disagree over how to deal with the challenges that have afflicted the region for more than three years. Last month’s understanding has not helped bridge the gap between the two sides yet, as each party remains committed to its foreign policy positions that existed before the outbreak of the crisis.

The timing of the announcement of the joint committee between Riyadh and Abu Dhabi is linked to the region’s political agenda for the coming months. At the top of this agenda is Sisi's near certain victory in the upcoming election. After he becomes president, he will need major economic and political support to consecrate his rule, to make a break with everything that happened in the past three years and convince the Egyptians that his reign will be a chance for prosperity and stability. The joint committee’s aim is to manage the Gulf’s support for the new government in Egypt and support Sisi in the face of possible pressure from regional or international bodies. This pressure may increase if street demonstrations and protests continue, potentially resulting in a domestic Egyptian settlement that will allow the return of the Muslim Brotherhood to political life, even if through this year’s parliamentary elections.

Egypt’s file is also linked to the political and security developments in Libya after Maj. Gen. Khalifa Hifter announced a military operation dubbed “Operation Dignity” on May 16. Hifter said the operation’s aim is to cleanse Libya of the Muslim Brotherhood, and this is the theme of the battle with the armed Islamic factions in Libya. It is said that those factions are supported by Qatar and have many members and a lot of weapons, threatening Libya with the possibility of a long civil war.

The negotiations between Iran and world powers, which will be decisive in June with the looming deadline of the interim nuclear agreement on July 20, will be added to the agenda, along with the political developments of the situation in Iraq and Syria.

However, the Egyptian file and its connection to the Libyan situation mainly stand behind the announcement of a joint committee. Any failure by Sisi to stabilize his rule during the first few months in office means the potential collapse of Saudi and UAE plans in Egypt, thus leading to a serious decline in the influence of both countries in the region. Their influence had increased after the Egyptian military succeeded in ousting former President Mohammed Morsi and regained their sway over the Egyptian decision-making institutions.

Whether to hold the Egyptian card or increase distance from it remains a highly important issue for the two Gulf states, which are waiting for the nature of the relationship between Iran and the United States to clear up and for the Iranian role in the Middle East to take shape, given the vague US role and the undecided issue of toppling President Bashar al-Assad’s regime in the Syrian revolution.

Since the Libyan situation is related to the Egyptian issue, it is being dealt with in consideration of the presence of Islamist parties and groups in Libya and their influence and possible threat to the stability of the new rule in Egypt. This might affect the stability of the new regime in Egypt, especially if the protests and security crackdown escalate at the same time.

The formation of the joint committee cannot be distanced from the escalation of the crisis with Qatar, either. Saudi Arabia, the UAE and Bahrain withdrew their ambassadors from Qatar for many reasons, among them that Qatar is playing — in Egypt, Libya, Syria and in many regional files — different or antagonistic political roles to those played by Saudi Arabia and the UAE, especially considering Qatar’s embrace of the movements of political Islam.

In his first media appearance after leaving his post more than a year ago, former Qatari Foreign Minister Hamad bin Jassim asserted Qatar’s policy as a point of contention with Saudi Arabia and the UAE on Egypt in particular, and on how to deal with the Arab uprisings in general.

The joint committee between Abu Dhabi and Riyadh, which intends to adopt a common foreign policy to meet the above challenges, means that the dispute between Qatar and the three countries still exists, that unifying the GCC countries behind a common foreign policy is no longer possible and that Riyadh and Abu Dhabi have decided to go ahead with their own agenda without waiting for the other Gulf states to make their positions clear.