The announcement by Saudi Arabia, Bahrain and the United Arab Emirates that they are withdrawing their ambassadors to Qatar is a further sign of the deterioration in Saudi-Qatar ties and the fragmentation of the Gulf Cooperation Council. 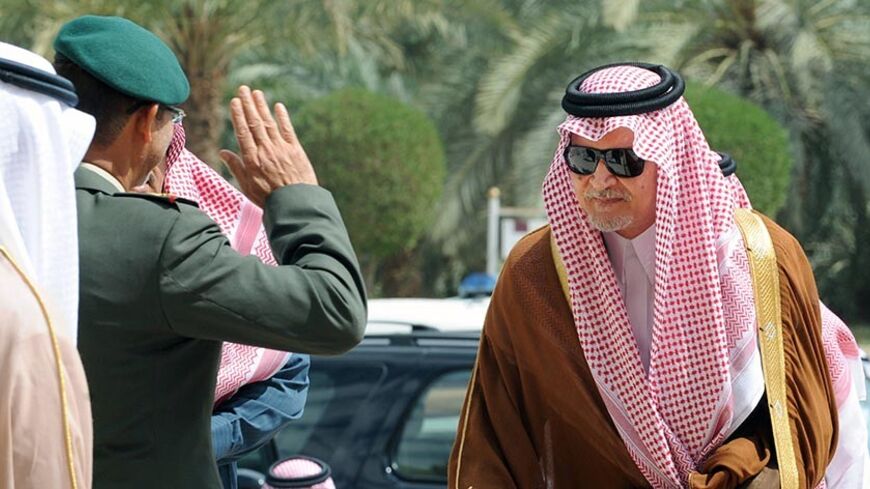 The fragmentation of the Gulf Cooperation Council (GCC) is one of the unexpected casualties of the Arab uprisings. On March 5, Saudi Arabia, Bahrain and the United Arab Emirates (UAE) announced in a joint statement that they have withdrawn their ambassadors from Qatar, thus confirming the country as the enfant terrible of the Gulf monarchies. Vague reasons were given to justify this unprecedented bold move, attributed to ensuring “stability and security,” while sensational details began to emerge in the Saudi- sponsored press about the alleged hidden intrigues of Qatar against its neighbors.

The three GCC states professed to have tried to persuade Qatar to remain within the fold of the GCC in its overall policies toward the Arab region, mainly to withdraw its support for the Muslim Brotherhood and stop being a launching pad for dissidents and activists not only in the wider Arab region but also in the Gulf itself. Saudi Arabia managed to enlist Bahrain and the UAE to back this symbolic break in relations with Qatar, but it must remain the prime suspect behind ostracizing an old, troublesome neighbor.

Over the last three years, Saudi Arabia tried to be consistent in dealing with the turbulence of the Arab uprisings. But the result was rather chaotic and erratic. Saudi Arabia was most comfortable with the old Arab order in which it had maintained long-term relations with stable regional allies and international partners. With the exception of its historical rivalry with Iran, which dates to 1979, it had in the Arab region several close allies and friends it could rely on in times of crisis. The challenge to this old order originated in the Arab uprisings. The uprisings bewildered Saudi Arabia’s foreign policy and eventually led to creating more enemies than friends. The Saudi regime was compelled to resist the uprisings and develop foreign policies that guaranteed first the permanence of the monarchy as a model of government in the GCC countries and in Jordan and Morocco and, second, to support counter-revolutionary military republicanism in Egypt. These two objectives dictated the way Saudi Arabia responded to the uprisings in both the Arabian Peninsula and North Africa.

Only Qatar seemed to challenge the two Saudi objectives. From the very beginning, Qatar presented itself as an ally of revolutionary forces, mainly the Muslim Brotherhood, and defied Saudi Arabia in North Africa. Now, it is accused of threatening Gulf security itself as it has become the patron of dissident Islamists who might one day challenge the Gulf monarchies. The joint GCC statement announced that Qatar failed to “implement a November 2013 agreement not to back anyone threatening the security and stability of the GCC whether as groups or individuals — via direct security work or through political influence, and not to support hostile media.” This vague statement embodied a subtle accusation that Qatar had become a threat to domestic stability that could no longer be tolerated by its close neighbors. More than Bahrain and the UAE, Saudi Arabia must be the most worried about Qatar, simply because it has a large Islamist constituency that may find refuge in Qatar.

Even before the Arab uprisings, Saudi relations with Qatar continued to be tense despite the semblance of calm and reconciliation. Qatar’s historical support for a wide range of Islamist groups remained a source of contention between the two countries. Saudi Arabia was worried about Qatar becoming a platform for Saudi Islamists, in addition to claiming success in places like Egypt and Tunisia. Saudi Arabia interpreted the success of Islamists as a success of their backer, Qatar, and its hidden agenda to replace Saudi Arabia as the major arbiter of Arab regional politics.

But the situation is different in Saudi Arabia, where not only terrorism but also a peaceful Islamist movement has existed since the 1970s. The Saudi regime feared that its own Islamists would be empowered after the Arab uprisings. King Abdullah bin Abdulaziz was the first to congratulate the interim Egyptian government in July and promise lavish subsidies worth billions of dollars.

The Muslim Brotherhood's base in Saudi Arabia and the Gulf in general remains the educated middle classes who combine a certain kind of piety with immersion in modernity and capitalist consumption. This class is destined to widen as a result of the expansion of mass education. Saudi Arabia’s overt support for the Egyptian coup inevitably led to abandoning the veneer of accommodation with Sunni Islamist groups and turned the Muslim Brotherhood and their Qatari backers into real enemies after decades of tolerance and precarious coexistence with the Saudi regime.

Previously, the Muslim Brotherhood played an important role in helping Saudi Arabia demonstrate its Islamic credentials through its work in Saudi-sponsored pan-Islamic institutions, but after the Egyptian coup, Riyadh lost them as reluctant and suspicious partners who could do business together.

In the context of the GCC meetings, the semblance of solidarity was maintained, but tense relations with Qatar over security and economic matters demonstrated that Saudi hegemony over this regional forum was also under stress and could no longer be taken for granted. With the exception of Bahrain, Saudi authority over the rest of the council members was at best tolerated and at worst openly challenged. GCC members resisted several Saudi initiatives: the speedy wish of King Abdullah to move the council from cooperation to union, the common currency with a central bank in Riyadh, the incorporation of Morocco and Jordan as special partners in the GCC and the 2012 common security treaty. On these proposals, Saudi Arabia was unable to force a consensus among its closest allies in the Gulf region. The UAE resisted financial homogenization; Oman utterly rejected the union and openly threatened to withdraw from the GCC if it became reality; Kuwait did not welcome inviting Jordan to be a special GCC member; and Qatar resented Saudi efforts to undermine its Islamist clients in North Africa and promote the Salafists as a countercurrent.

The blow to Saudi GCC hegemony was, however, Gulf differences over the so-called Iranian threat. Saudi Arabia will probably never forgive Sultan Qaboos of Oman for playing a covert role in facilitating dialogue between Iran and the United States, which led to a serious rapprochement and continuous dialogue over Iran’s nuclear program. If this rapprochement leads to lifting the sanctions imposed on Iran and its rehabilitation in the international community, Saudi Arabia will no doubt interpret this as a blow to its exclusive position in the region as the main US ally. But Oman does not have the financial capabilities of Qatar or the ambition to rival Saudi Arabia as an arbiter of Arab regional politics. It is this ambition of Qatar that worries the Saudis most. Qatar proved that it is still determined to play that role at the expense of the Saudis, who have spared no opportunity to belittle this small but wealthy state. Qatar used its media empire to shape Arab public opinion through Al Jazeera, playing on emotional national sentiments and its wealth to back those who challenged the old Arab order. Saudi Arabia strived to return to the vanishing status quo ante and maintain the stability of its own position in a turbulent region.

For Qatar, perhaps Saudi Arabia rather than Iran or the Muslim Brotherhood is the real threat. Let’s not forget that in the 1990s Saudi Arabia tried to undermine Sheikh Hamad ibn Khalifa al-Thani by supporting deposed members of his family to regain power after the 1995 coup. Serious economic disputes arose in 2006 when Saudi Arabia objected to the UAE-Qatari Dolphin Undersea Natural Gas Pipeline project. Relations with Qatar improved in 2007, but suspicion persisted between the two countries. Tribal connections on the border between the two countries remain open for manipulation on both sides, but the real threat remains in what Saudi commentators began to allude to immediately after the announcement to withdraw the ambassadors.

Saudi Arabia is obviously not in a position to invade Qatar as Saddam Hussein did in Kuwait, but these commentators are hoping that the Qatari ruling family would have a member who would bring Qatar back into the Gulf domain, meaning accept subservience to Saudi hegemony. During interviews on BBC Arabic television, Saudi commentators appealed to “wise” members of the Qatari ruling family to come back to the GCC fold. Saudi Arabia does not see Qatar as a state, and reference to it as a family of 250,000-300,000 has already been made by Saudi princes. This is surprising, since differences between oil and gas family corporations may not be that great. Saudi Arabia can ostracize Qatar, but cannot directly punish it. Saudi Arabia can covertly undermine Qatar if it adopts the old British tactics of instigating peaceful coups among Gulf ruling family members. This must remain a worry for Qatar, although it is a remote possibility at the moment.

The Arab uprisings are destined to redraw the map of alliances in the region with regional forums such as the GCC becoming more redundant with time, not to mention the fate of the old Arab League, which seems to exist only in the archives now. But it is certain that neither Qatar nor Saudi Arabia will emerge as the main arbiters of Arab politics. Arabs are no longer seeking salvation by a charismatic hero. Their leaderless revolts promise to undermine any attempt by aging monarchs or aspiring young ones to lead them.