Lifting US sanctions, as called for in the Joint Plan of Action, would eventually require dealing with Hezbollah. 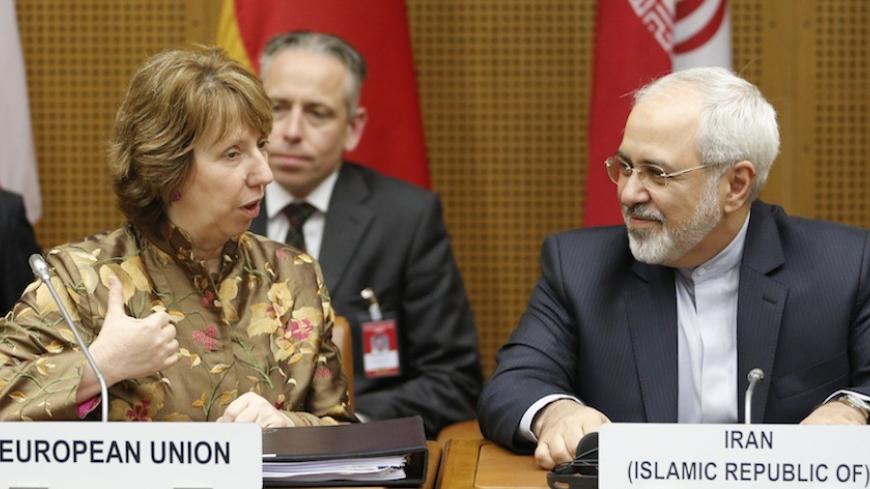 Laura Rozen reports this week that top Iran and EU diplomats may meet in coming days in Turkey to address a snag in negotiations on a comprehensive nuclear agreement.

While Rozen described diplomats on both sides at the nuclear talks in Vienna on May 14 as “taken aback” by the other sides' positions, Iranian officials nonetheless sought to maintain a positive spin on the prospects for a deal.

Iranian President Hassan Rouhani said on May 21, “Today, the nuclear negotiation is progressing and is on the threshold of reaching a conclusion," and called for the parties to stop making excuses.

Former lead nuclear negotiator Saeed Jalili, a conservative and close to Supreme Leader Ayatollah Ali Khamenei, said on May 22, “We should permit the (Iranian) nuclear negotiation team to proceed with its programs in the framework of (the Supreme Leader’s proposed) 'heroic lenience' and we should all assist them in their bid to materialize the nation’s rights.”

The optimistic public diplomacy may be masking some concerns among Iranian leaders about several deadlocked technical issues, as well as questions about the US commitment to lifting sanctions in what Iran would consider a reasonable timetable.

Seyed Hossein Naghavi Hosseini, spokesman for the Iranian Parliament’s National Security and Foreign Policy Committee, said there were “intense disagreements” over a variety of issues during the Vienna talks, included an alleged P5+1 proposal for a 10-year rollout for sanctions relief, as reported in Al-Monitor from Tasnim News Agency.

Hosseini, who does not speak for the Iranian negotiating team led by Foreign Minister Mohammad Javad Zarif, rejected the charge that only certain sanctions could be released in the nuclear talks, calling the segmentation of sanctions a “dangerous game.”

Rouhani’s political adversaries in Iran, who oppose the nuclear talks, may already be planning a "containment" strategy for the Iranian president, as Meir Javedanfar writes.

The “Joint Plan of Action” (JPA) agreed by the P5+1 and Iran last Nov. 24, cites a “specified long-term duration” for the “final step of a comprehensive solution,” but 10 years may be too long in the Iranian score.

If there's a 10-year rollout for sanctions relief, then Iran would likely counter that the P5+1 can expect a 10-year “reciprocal” response from Iran to the P5+1 demands on Iran’s enrichment program, the Arak (IR-40) reactor, implementation of the Additional Protocol and other technical issues to be resolved in the talks, and that this time frame would in the end be impractical for both sides.

US President Barack Obama has the executive authority to waive many of the sanctions on Iran.

Iran might accept waivers, which can be rescinded, but perhaps as a first step in a process leading to full sanctions relief.

The JPA calls for a "comprehensive solution" that would "comprehensively lift UN Security Council, multilateral and national nuclear-related sanctions, including steps on access in areas of trade, technology, finance, and energy, on a schedule to be agreed upon.”

The United States and Iran should eventually welcome a broader discussion of those regional security issues that would need to be addressed to lift, not just waive, US sanctions on Iran. As this column wrote in November, “If Iran wants full relief from US oil and financial sanctions under the Iran Sanctions Act, the president must certify to Congress that Iran no longer seeks weapons of mass destruction, is no longer a state sponsor of terrorism and no longer represents a significant threat to US national security interests and allies. So if both the United States and Iran are serious about sanctions relief, the conversation about Iran, Israel and Hezbollah (listed by the United States as a terrorist group, but backed by Iran) will need to be had.”

And as Al-Monitor wrote in February: “You can’t solve Lebanon, or Hezbollah, without solving Syria. Gen. Michel Aoun, head of Lebanon’s Free Patriotic Movement and a key broker of the deal this week that allowed formation of a new Lebanese government, began discussions of a plan to assimilate Hezbollah’s forces into the Lebanese army. This deal could be picked up again, at the right time.”

Many members of Congress are eager to have their say on a possible deal with Iran. As Julian Pecquet reports, Senator Bob Corker, ranking Republican on the Senate Foreign Relations Committee, failed this week in his bid to add a nonbinding joint resolution of disapproval to Sen. Barbara Boxer’s US-Israel Strategic Partnership Act.

There is also heightened anxiety in Israel over the prospect of a nuclear deal with Iran.

Akiva Eldar reported last week on what some are calling an Israeli “scare campaign” about Iran’s nuclear program, and Ben Caspit wrote on the confidence in Israel’s security establishment in its warnings of an Iranian breakout capacity in two to three months.

The International Atomic Energy Agency, however, documents a seriousness of commitment by Iran since the JPA. In a report released on May 23, the IAEA notes that “Iran has implemented the seven practical measures that it agreed with the Agency in February 2014 in relation to the Framework for Cooperation”; “Iran has not enriched” uranium above 5% “at any of its declared facilities"; Iran’s stock of uranium enriched up to 20% “has decreased from 209.1 kg to 38.4 kg”; and "all of the enrichment related activities at Iran’s declared facilities are under agency safeguards, and all of the nuclear material, installed cascades, and feed and withdrawal stations at those facilities are subject to Agency containment and surveillance.”

Public opinion appears to back Obama’s efforts to secure a nuclear deal with Iran, but with caveats. Polls in November 2013 showed that a majority of Americans supported an agreement offering sanctioning relief for constraints on Iran’s nuclear program. A March 2014 poll found that 82% of Americans consider Iran either “unfriendly” or an “enemy” of the United States.