The deal with Iran, and what comes next

The agreement with Iran opens up new possibilities for both the United States and Russia in the Middle East. 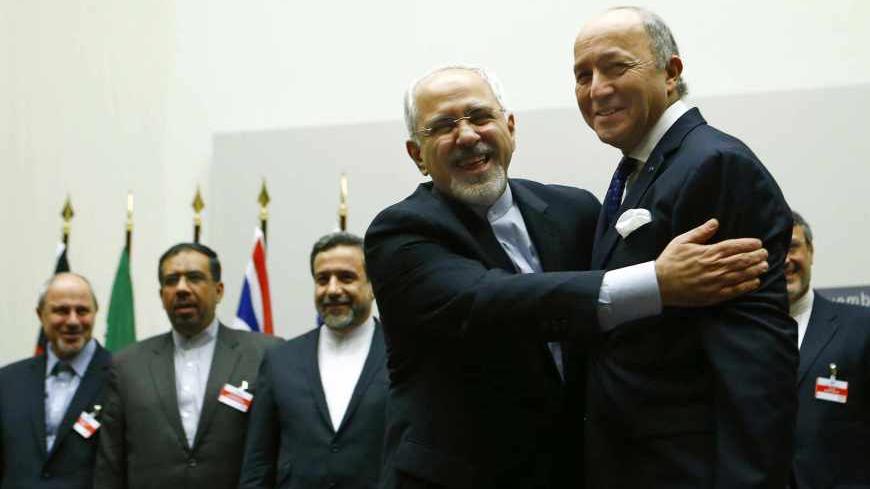 The “joint plan of action” agreed to by six major powers and Iran in Geneva today is nothing short of a breakthrough, not only as an initial step in dealing with Iran’s nuclear program but also for broader issues of regional security in the Middle East.

The deal itself lays out a plan for the next six months while a comprehensive nuclear pact is negotiated. During these six months, Iran has agreed to unprecedented monitoring of its nuclear facilities, a halt to new centrifuge installation and uranium enrichment over 5% and no further development at Natanz, Fordow and the Arak reactor in return for some sanctions relief.

Laura Rozen, covering the talks in Geneva, broke the story of how the talks were facilitated by secret backchannel diplomacy by US Deputy Secretary of State William Burns.

US Secretary of State John Kerry addressed critics of the deal when he said today, “There are those who will assert that this deal is imperfect. Well, they, too, bear a responsibility, and that is to tell people what the better alternative is.”

The alternative, it seems, would be more sanctions, which would likely result in less monitoring, more centrifuges, more enrichment above 5%, further development at Natanz, Fordow and Arak, a possible end to negotiations as Iranian hard-liners would undercut President Hassan Rouhani and Foreign Minister Mohammad Javad Zarif, and increased prospects for a military strike. It is hard to see how the objective of preventing an Iranian nuclear weapon is served over the next six months by this alternative.

Americans remain skeptical of Iranian intentions but nonetheless back negotiations. A CNN/ORC poll in November reports that 56% favor a deal, and an ABC News/Washington Post poll found that 64% support it. More than 60% of those polled, however, are not convinced that an agreement will prevent Iran from developing a nuclear weapon.

The administration may have welcomed a bit of the “bad cop” routine by Congress over the last few weeks to keep the heat on Iran. The first step agreement, however, calls on the United States to “refrain from imposing new nuclear-related sanctions” on Iran. In his statement announcing the agreement, US President Barack Obama said, “Now is not the time to move forward on new sanctions — because doing so would derail this promising first step, alienate us from our allies and risk unraveling the coalition that enabled our sanctions to be enforced in the first place.”

Obama’s first stop in keeping his end of the deal on sanctions, assuming Iran does its part, will be Senate Majority Leader Harry Reid, D-Nev., who said on Nov. 21, “While I support the administration’s diplomatic effort, I believe we need to leave our legislative options open to act on a new, bipartisan sanctions bill in December.”

The deal with Iran, and the concurrent positive trend in US-Iran ties, has alarmed US allies in the region, especially Israel and Saudi Arabia.

Alternatively, the first step agreement could be seen as not only buying time on Iran’s nuclear program, with the prospects for a comprehensive deal, but also as the beginning of the beginning of a shift away from the bitter hostility between Israel and Iran, as Jahandad Memarian writes this week for Al-Monitor.

Such a shift in the relationship that dare not speak its name is not so far-fetched when one considers the role that Russia can play as a broker in this exchange. As Fyodor Lukyanov writes, Moscow’s stature has witnessed a surge because of its role in Syria, including collaboration on the chemical weapons framework, which led to UN Security Council Resolution 2118, passed unanimously on Sept. 27.

Moscow also played a role in engaging Iran on Syria, and the nuclear agreement today should allow deeper consultations on Syria, as Ali Hashem reported last week from Tehran. Moscow’s proven good offices in dealing with Damascus and Tehran has been bolstered further with the return of Israeli Foreign Minister Avigdor Liberman. As Ben Caspit wrote last week for Al-Monitor: “Liberman has many interests in the Russian capital and former Soviet republics. He has had long-standing intimate relationships with senior Russian echelons. He believes that Russia holds many keys relating to the Middle East. Even during rough times, when it is reported (yet again) that Putin plans to sell S-300 missiles to the Syrians or something in that vein, Liberman is always there to pacify, wink and explain to his interlocutor that the distance between the reports in the media and the actual delivery of the missiles is very big.”

The United States alone does not yet have all the keys to close a deal between Israel and Hezbollah, but the pieces are coming together. Any negotiation on Hezbollah will run through Damascus as well as Tehran, and here again we get to Moscow’s role, with its newfound credibility in Damascus, Tehran, Jerusalem and Washington. Turkey, another key regional ally, is already turning the corner in its failed policies in Syria, resetting its ties with both Tehran and Washington, as Semih Idiz writes this week. A growing consensus among Turkey, Iraq and Iran on Syria is good news for a political solution and bad news for terrorists and armed groups seeking to overthrow the Syrian government and will serve, over time, to contain the efforts at autonomy by Syria’s Kurds, as reported this week by Wladimir van Wilgenburg. So, taken together, if these trends continue, and the situation in Syria begins to stabilize, the prospects to diffuse tension on the Israel-Lebanon border are potentially greater than ever, as Hezbollah can only begin to draw down when there is peace with Israel.

And here is the kicker for the endgame with Iran. If Iran wants full relief from US oil and financial sanctions under the Iran Sanctions Act, the president must certify to Congress that Iran no longer seeks weapons of mass destruction, is no longer a state sponsor of terrorism and no longer represents a significant threat to US national security interests and allies. So if both the United States and Iran are serious about sanctions relief, the conversation about Iran, Israel and Hezbollah (listed by the United States as a terrorist group, but backed by Iran) will need to be had.

If Iran, over time, proves its nuclear intentions, another step — perhaps not so far off — could be a direct US-Iran agreement on civil nuclear cooperation, which would need to be ratified and passed by Congress.

These changes will not happen overnight, if they happen at all. The agreement in Geneva is of course only a first step. But it is a big step, and in the right direction, for US policy and regional security in the Middle East.

On Nov. 13, an Al-Monitor correspondent in Beirut reported that “a security source inside Hezbollah confirmed to Al-Monitor that Lebanese security and intelligence services have information that extremist Salafist groups may be planning to attack Shiites participating in Ashoura.”

On Nov. 19, a terrorist bombing attack killed at least 23 people outside the Iranian Embassy in Beirut.

On Nov. 20, the McClatchy news service reported that a Western intelligence agency had passed intelligence information to the Lebanese government about potential terrorist attacks by al-Qaeda-related groups against Hezbollah targets.

On Nov. 20, The New York Times reported on the electricity and sewage crises in Gaza.

Al-Monitor-SAIS conference on "The US, Russia and the Middle East"

On Thursday, Dec. 5, Al-Monitor and the Paul H. Nitze School of Advanced International Studies (SAIS), Johns Hopkins University, will hold a conference on “The US, Russia and the Middle East” in Washington, featuring Vitaly Churkin, permanent representative of the Russian Federation to the United Nations; Rep. Mike Rogers, R-Mich., chairman, House Permanent Select Committee on Intelligence; Rep. Christopher Van Hollen, D-Md., ranking Democrat on the House Budget Committee; Zbigniew Brzezinski, counselor and trustee at the Center for Strategic and International Studies and senior research professor of international relations at SAIS; as well as Al-Monitor columnists and analysts and others.

by Murielle KASPRZAK and Joseph SCHMID | AFP | May 26, 2022
END_OF_DOCUMENT_TOKEN_TO_BE_REPLACED