The consequences of the agreement are already extending beyond Iran’s nuclear program. 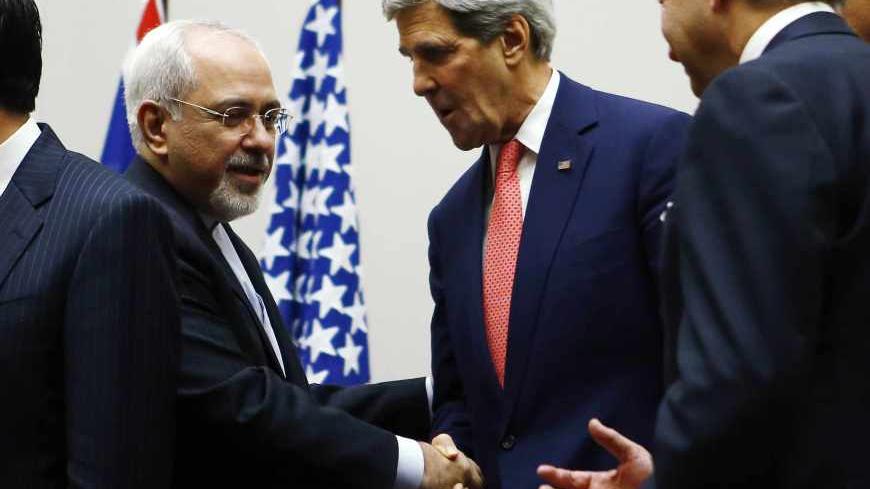 The “joint plan of action” agreed on by six world powers and Iran on Nov. 24 is in a short time proving to be a catalyst for a regional trend toward diplomacy and realism.

The mood is already shifting in the Gulf, where there had been resistance if not downright opposition at times to the negotiations with Iran. UAE Foreign Minister Abdullah Bin Zayed Al Nahyan visited Tehran this week for meetings with Iranian President Hassan Rouhani and Foreign Minister Mohammad Javad Zarif, while the Kingdom of Bahrain invited Zarif to participate in the Manama Dialogue Regional Security Summit, organized by the International Institute for Strategic Studies, to be held Dec. 6-8, as reported by Ali Hashem for Al-Monitor.

In perhaps the most substantial shift, the Kingdom of Saudi Arabia released a statement on Nov. 25 welcoming the joint plan of action, saying, “Saudi Arabia views the agreement as a primary step toward a comprehensive solution to the Iranian nuclear issue provided it leads to a Middle East and Gulf region free of all weapons of mass destruction, including nuclear weapons.”

In Israel, despite a skeptical public and statements of alarm by Prime Minister Benjamin Netanyahu, there is also awareness among national security leaders that the deal with Iran may have its advantages, and that Israel is poorly served by putting itself at odds with the international coalition that forced Iran to negotiations.

Akiva Eldar captured the broader context of the Iran deal for Israel, writing, “The agreement with Iran was signed a short time after the agreement between the United States and Russia that brought about the removal of chemical weapons from Syria. Thus a much more concrete and immediate threat than the Iranian one was removed from the borders of Israel. The decision of the powers to wave a stick instead of landing a blow on the Iranian protectorate in Damascus should have signaled to Netanyahu that this would also be the route they chose to take in the talks with Tehran. It stands to reason that Iran will now be invited to contribute to a renewed effort to end the cruel civil war in Syria. We are witness to the beginning of Iran’s emergence from the international solitary confinement it entered following the revolution in 1979.”

Ben Caspit reports from Jerusalem, “There’s no panic at all among Israel’s professional military echelons. Nobody talks about a catastrophe or an imminent second Holocaust. People discuss the merits of the agreement with levelheadedness and discretion. After all, doomsday prophecies are not their thing. For this, we have Netanyahu.”

Dan Meridor, a member of the Likud Party and former deputy prime minister and minister of intelligence and atomic energy under Netanyahu, told Al-Monitor’s Mazal Mualem this week, “It’s a mistake to pick a fight with partners when we’re in the midst of a campaign against Iran, in which the Americans have the main role. Embarking on an offensive of attacks, criticism and scorekeeping harms the common struggle of large parts of the world, the United States, Europe and the Arab countries. The disputes do not help the struggle, but just give the Iranians a reason to gloat. Nothing is achieved by public disputes. The alliance between Israel and the United States is an important component of our powerful image. … Israel needs to be part of the world, to be a partner in this campaign.”

In Congress, while there is still skepticism about the deal, there also seems to be a trend toward legislation that emphasizes a congressional role in Iran’s compliance with the terms of the deal, rather than the introduction of new sanctions, during the six-month negotiation period. The Iran Nuclear Compliance Act of 2013, introduced Nov. 21 by Sen. Bob Corker, R-Tenn., ranking member on the Senate Foreign Relations Committee, is now pending before the Banking, Housing and Urban Affairs Committee, which has Senate jurisdiction on sanctions bills.

As reported here last week, the man to watch is Senate Majority Leader Harry Reid, D-Nev., who told NPR’s Diane Rehm that the interim agreement is an “important first step” and that he will look to both Sen. Tim Johnson, D-S.D., chairman of the Senate Banking Committee, and Sen. Robert Menendez, D-N.J., chairman of the Foreign Relations Committee, on whether the Senate should hold hearings and consider more sanctions.

The conversations that have begun about Iran’s nuclear program are already having consequences beyond the nuclear file, including the Gulf, Turkey and Syria. While Kadri Gursel writes that the Turkish “reset” from its failed sectarian policies may require even deeper political changes, Ankara’s shift, which is a work in progress, is already good news for a political solution in Syria, especially with the Geneva II conference to be held on Jan. 22. A real peace process in Syria would mean relief for Jordan, Lebanon and Iraq, those countries most affected by the spillover of the war, the spike in terrorism and the flood of refugees.

A stable Syrian government, resulting from a successful Geneva II political process, perhaps following elections, would offer a chance for an Israel-Lebanon-Syria peace process. This would mean the eventual demilitarization of Hezbollah, whose raison d’etre is resistance to Israel’s occupation. The reintegration of Hezbollah forces into the Lebanese army and the normalization of Hezbollah solely as a Lebanese political party, and not an armed resistance force, would be a giant step toward solving Lebanon’s perpetual national crisis.

Any deal on Hezbollah would run through Damascus and Tehran, via Moscow’s good offices, en route to Jerusalem, as this column reported last week. While the United States cannot broker this deal, the future of Hezbollah is directly connected to the nuclear negotiations with Iran. For Iran to get relief from US oil and financial sanctions under the Iran Sanctions Act, the president must certify to Congress that Iran no longer seeks weapons of mass destruction, is no longer a state sponsor of terrorism and no longer represents a significant threat to US national security interests and allies. Hezbollah is considered a terrorist group by the United States. So questions about Iran’s nuclear program and its role in the region, including support for Hezbollah, are the endgame in any discussion of a comprehensive agreement.