The success of the P5+1 in closing a deal with Iran might encourage the body to take part in the Israeli-Palestinian talks and fill the diplomatic space left by the Middle East Quartet. 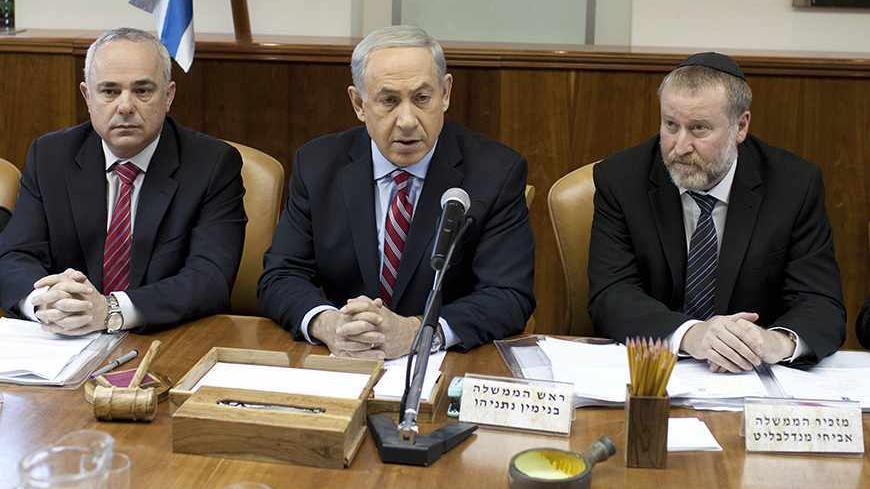 There was no need to bite one's nails in anticipation of Prime Minister Benjamin Netanyahu’s response to the agreement reached before dawn on Sunday, Nov. 24 between the world powers and Iran. One could have simply compared the new agreement with the demands Netanyahu presented at the government meeting Sept. 17 to predict that the prime minister would harshly attack it. At that time, Netanyahu demanded that US President Barack Obama include four conditions in the understandings with Iran: stopping all uranium enrichment, removal of all enriched uranium from Iran, shutting down the Qom facility and stopping the plutonium enrichment track.

“Only a combination of these four steps will constitute an actual stopping of the nuclear project,” declared Netanyahu, adding, “Until all these steps are achieved the pressure on Iran should be increased and not relaxed — certainly not eased.” He repeated this demand even when it was clear that there would be an interim agreement to test the seriousness of the Tehran regime’s intentions.

And here, the six most powerful nations in the world preferred the language of diplomacy over the discourse of violence. The leaders of the powers in the group called the P5+1 (the five permanent members of the UN Security Council plus Germany) ignored the position of the prime minister of Israel, and relaxed the pressure on Iran in exchange for much less than those four conditions. They were satisfied with a win on points rather than a humiliating knockout. Despite all of Israel’s steps to prevent it — the threats to attack Iran, the sharp public dispute with Obama’s administration and the recruitment of conservatives in Congress against him, the wooing of the French, journeys to Beijing and Moscow and interviews with the British and German media — the forum preferred a temporary and partial agreement over a final, full-blown crisis. Netanyahu, instead of praising the agreement and taking the credit due to him as one of the initiators of the sanctions that caused Iran to ask for a compromise, chose to present Israel as a poor victim. He continues to demand a settlement that would bring Tehran to its knees and present him as the big winner.

The agreement with Iran was signed a short time after the agreement between the United States and Russia that brought about the removal of chemical weapons from Syria. Thus a much more concrete and immediate threat than the Iranian one was removed from the borders of Israel. The decision of the powers to wave a stick instead of landing a blow on the Iranian protectorate in Damascus should have signaled to Netanyahu that this would also be the route they chose to take in the talks with Tehran. It stands to reason that Iran will now be invited to contribute to a renewed effort to end the cruel civil war in Syria. We are witness to the beginning of Iran’s emergence from the international solitary confinement it entered following the revolution in 1979.

The effort to stop the Iranian nuclear program was Netanyahu’s flagship goal. He dedicated the best of his energy, talent and time to this effort, and at the same time, invested billions of shekels of public funds in preparation for a military strike by Iran. When the prime minister presents the interim agreement as a humiliating capitulation to the Iranians — whom he describes as the heirs of the Nazis — he puts Israel into the same solitary confinement that Iran just exited. It’s no wonder, then, that the Iranian and Arab media is celebrating President Hassan Rouhani and that the western media, including in Israel, is criticizing Netanyahu. If the prime minister was honest with himself and the public, he would admit his failure and offer his resignation.

The latest developments in the Syrian and Iranian arenas turn diplomatic and public attention to the oldest conflict in the Middle East. A few weeks ago, Netanyahu himself connected the negotiations with Iran with the solution to the Israeli-Palestinian conflict. The vociferous conflict between him and Obama turned Secretary of State John Kerry and his staff into suspect mediators in the eyes of a substantial portion of the Israeli public that supports its leader’s positions. How could they trust an American government that, according to their prime minister, allowed a bad agreement with Iran after secretly conducting negotiations with the ayatollahs?

It’s quite doubtful that the United States could have reached an agreement with Iran without the cooperation of Russia, China, France, Great Britain and Germany. The agreement endows the six powers with strength, momentum and prestige in the international arena. Paris’ support of some of Netanyahu’s demands and the special relations between Israel and Germany could increase the Israeli public’s faith in the P5+1. This forum could fill the diplomatic space left by the Middle East Quartet (the United States, Russia, the European Union and the United Nations), which was established more than a decade ago in an attempt to solve the Israeli-Palestinian conflict. The senior forum of the Quartet hasn’t met for more than two years, and it seems that the United States’ attempt to bear the burden of mediating between the sides by itself is leading the process to a dead end.

The most intriguing question now is whether Obama intends to remain on the path of conflict with Netanyahu on all that’s related to the Israeli-Palestinian track. Will Russia, China and the European powers agree to cooperate in this arena as well? Will they dare advance, in opposition to the position of Israel’s prime minister, another agreement that would prevent the use of violence in order to solve this bloody conflict?