Russia has ignored the 2006 decision by the Quartet not to engage in contacts with Hamas until it renounces violence, suggesting another move by Moscow to fill the vacuum left by the United States in the region. 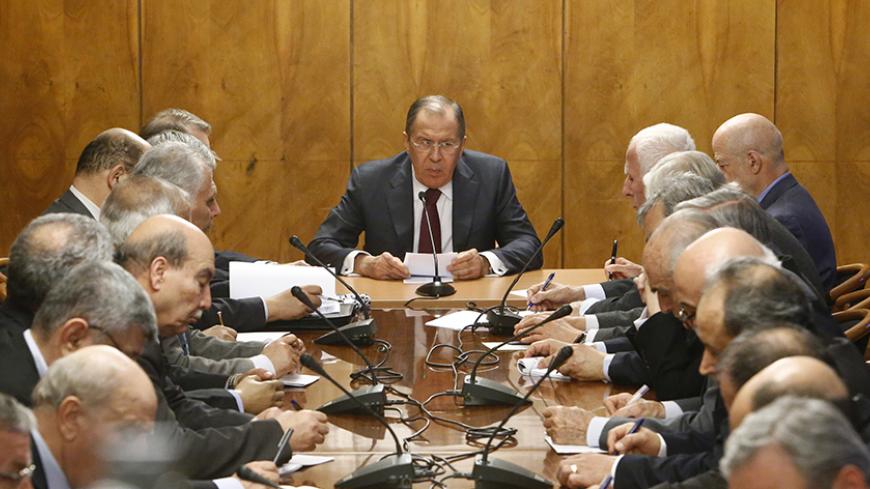 Seeing the smiling face of Mousa Abu Marzouk, deputy head of Hamas' political bureau, sitting comfortably in Moscow on Jan. 17 alongside senior Fatah official Azam al-Ahmed, it was hard not to recall the famous interview by Avigdor Liberman in April before his appointment as defense minister. In that interview, Liberman promised that if appointed, he would give Hamas 48 hours to hand over the bodies of two Israeli soldiers killed in Gaza during the 2014 Operation Protective Edge. The Yisrael Beitenu chairman threatened that if Hamas failed to acquiesce to his demand, he would recommend to Ismail Haniyeh, Hamas' leader in Gaza, that he book himself a plot at a nearby cemetery. As far as anyone can tell, Haniyeh is doing well after Liberman’s first eight months in office. On the other hand, the romance between Israel and Russia, which the Moldova-born politician did everything in his power to broker, is in very bad shape.

The photo of the two senior Palestinian leaders, which did not get the coverage by Israeli media that it merited, was taken at a news conference held after three days of talks among representatives of Fatah, Hamas, the Islamic Jihad and other factions under the auspices of Russian Foreign Minister Sergey Lavrov. One can understand Israeli editors’ decision to play down the final communique from the Moscow talks announcing agreement on forming a Palestinian government of national unity and setting a date for elections in the Israeli-occupied territories. There are not enough fingers to count the number of similar announcements that ended in nothing being done. One usually says of such contacts that their importance lies in the fact that they took place. In this case, the importance of the meeting is in its venue and timing.

The official invitation to Hamas representatives to visit Moscow and prior to that Russia’s support for UN Security Council Resolution 2334, adopted unanimously Dec. 23 and affirming the illegality of Israel’s West Bank settlements, constitute failures of Israeli foreign policy. One can add to these the delivery of Russian S-300 missiles to Iran, despite efforts by Prime Minister Benjamin Netanyahu to thwart the deal. Russia supported the 2015 nuclear deal between the world powers and Iran and opposes Israel’s nuclear policy. Russian President Vladimir Putin said in September 2013 that Syria’s chemical weapons had been built in response to Israel’s nuclear weapons, and that given its technological superiority, Israel does not need to maintain nuclear weapons. Zvi Magen, former Israeli ambassador to Russia, even said that year that Russia is “dragging the Israeli nuclear issue into the Mideast negotiations” and that this could signal a “change in the Russian attitude to Israel.”

Indeed, as reported by international media, Russia is not standing in Israel’s way when it bombs Hezbollah-linked targets in Syria, but Putin is providing legitimacy to Palestinian groups that Israel views as “forces of terror.” For 11 years, since Hamas' 2006 election victory in Gaza, Israel has had the backing of a decision made by the Middle East Peace Quartet — Russia, the United States, the United Nations and the European Union — banning contacts with the organization until such time as it commits to renouncing violence, recognizing Israel and honoring all Israeli-Palestinian past agreements. When Hamas rejected these conditions, Quartet members made sure to conduct any contacts, which have been denied, with the group’s members behind closed doors.

Russia is now publicly flouting these rules. The Palestinians view this as the first step toward neutralizing, and perhaps even dismantling, the Quartet, which has aged prematurely. The agreement between senior Hamas and Fatah officials reached in Moscow is critical of the Quartet. That Russia succeeded in brokering an agreement where the Quartet failed strengthens this criticism and challenges the “Made in the USA’’ label often attributed to the group. Abu Marzouk said that Russia has a central role in influencing the Quartet, which he claims is controlled by the United States. Ahmed went even further, announcing that the Palestinians had severed ties with the Quartet given its “failure to find practical solutions for the Arab-Palestinian struggle.”

The United States' renewing the Israeli-Palestinian dialogue under its auspices in accordance with the so-called Kerry plan, while pushing Russia and the other two Quartet members aside, was perceived in Moscow as “underhanded,” Magen wrote in a 2014 position paper for the Institute of National Security Studies. The failure of the Kerry channel contributed to the decision by the Barack Obama administration to shift the center of gravity of US diplomacy to East Asia. In doing so, the United States opened up — or abandoned, if you like — the Israeli-Palestinian arena to Russia. As a result, Washington de facto assisted Moscow in completing the puzzle of gaining influence in the entire region: i.e., rapprochement with Egypt, Iran and Saudi Arabia, heavy-handed involvement in Syria and reconciliation with Turkey.

Two months before the US elections in November, President Vladimir Putin invited Prime Minister Benjamin Netanyahu and Palestinian President Mahmoud Abbas to a summit in Moscow. The invitation is still out there. Meanwhile, President Donald Trump’s America First policy fits in with the Russian vision of restoring Russia to its former glory, this time under Putin. He will not miss an opportunity to jump into the vacuum created by the unilateral US withdrawal from attempting to settle international conflicts.

Putin does not need permission from the Russian parliament for moves he makes at home or abroad. In addition, no foreign leader would dare interfere in his business or humiliate him in public. There is no pro-Israeli Russian lobby like AIPAC, which can mobilize parliament and influence public opinion. Putin does not need donations from Netanyahu’s wealthy friends to remain in power. He will do just fine without stamps of approval like the ones provided to him by Faina Kirshenbaum, Liberman’s party colleague who served as an observer for the 2012 Russian presidential elections, the same Faina Kirshenbaum who was suspected of committing fraud while serving as Liberman’s right hand and rejected numerous publications' allegations of election fraud by Putin supporters. Putin does not have a “special relationship” with Israel like the United States does nor with any country that does not serve his needs. He is not impressed by statements of “shared values” with the “only democracy in the Middle East.” Israel may well miss Barack Obama one of these days.