The Palestinian ambassador to Moscow tells Al-Monitor that Russia considers the Middle East its vital sphere of interest. 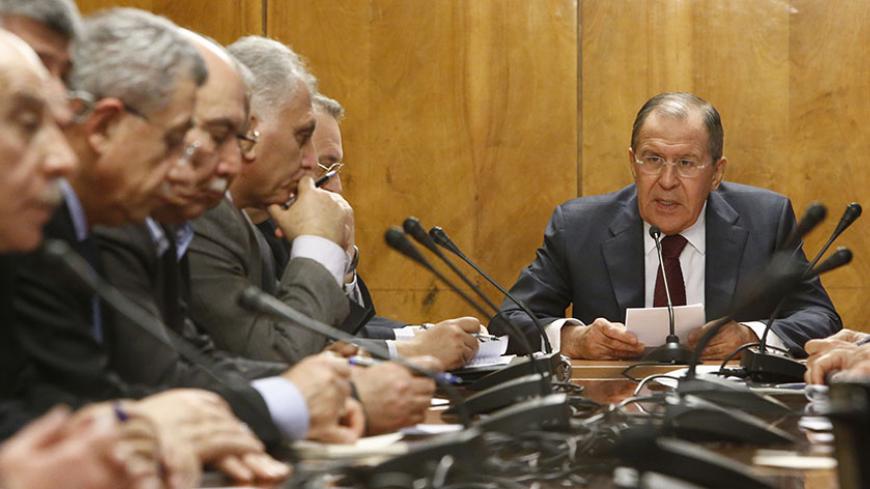 Palestinian Ambassador to Russia Abdel Hafiz Nofal told Al-Monitor that the Russians view the Middle East as vital to their interests, saying, "The Syrian conflict is finally moving toward resolution. Eleven Palestinian factions met in Moscow recently, and there are positive signs as far as Russia’s relations with the new Donald Trump administration." Nofal noted that all these activities are signs of the increased role of Moscow in the region. “It became clear during the Paris peace conference that the international community accepts [the fact] that Russia will have a bigger role to play in trying to resolve various conflicts. The Russians consider the Middle East as their vital sphere of interest,” the ambassador said by phone from Moscow.

Nofal said that the Russians hosted an inter-Palestinian meeting on Jan. 15 and Jan. 17 where important announcements were made. “Eleven Palestinian factions and not just Fatah and Hamas attended the meetings in Moscow,” he said. The meetings hosted by Russian Foreign Minister Sergey Lavrov focused on Palestinian national unity and the needs to establish a Palestinian state in the areas occupied during the 1967 war.

On Jan. 13, Secretary-General of the PLO Saeb Erekat met with Lavrov in Moscow ahead of the meetings and delivered a message to Russian President Vladimir Putin from Palestinian President Mahmoud Abbas. Nofal explained that the message included a request regarding the US plan to relocate the US Embassy to Jerusalem. “President Abbas asked that the Russians use their good offices to convince the Americans of the dangers of the embassy move and that this will escalate the tensions and will introduce a religious element to the conflict,” he said.

Nofal believes that the new Trump administration will work closely with Russia in the coming period to find a common vision for the conflicts in the Middle East. “What the Russians are trying hard to do is to convince the Americans that the Middle East is vital to their [Russians’] interests and that no action should be taken without consultation with Moscow,” he said.

A sign of the increasing role of Russia in the Middle East can be seen by Moscow hosting regional visitors recently. On Jan. 25, the Kremlin hosted Jordanian King Abdullah who met with Putin. According to the Jordanian official press agency’s report from Moscow, Abdullah and Putin discussed the “significance of Russia’s role in regional issues.”

On Jan. 25, the Jordan Times quoted the king as talking about the importance of the Russian role to the press before the meetings, writing, “Without Russia, we will not be able to find solutions to not only the Syrian problem but other regional problems in the Middle East.”

The Moscow sponsored talks, which appear to violate commitments made by the Quartet of which Russia is a member regarding shunning Hamas until it recognizes Israel, does not seem to have fazed the Russian and Palestinian participants.

The leaders of the Hamas and Fatah delegations to the Moscow meeting showed preference to Russia rather than the Quartet to sponsor the peace talks. The Palestinian delegation heads criticized the Quartet and called for the creation of a new body to oversee the Middle East peace talks.

On Jan. 17, delegation heads Azzam al-Ahmad of Fatah and Moussa Abu Marzouk of Hamas were quoted by Agence France-Presse as saying that the Quartet — made up of the United Nations, European Union, Russia and the United States — has failed to advance peace. “It was unable to advance the decisions taken by the international community, including [UN] resolutions. It is imperative to find a new working mechanism for the Israeli-Palestinian conflict,” Ahmad said.

Abu Marzouk, a senior member of the Hamas leadership, was also quoted in Moscow as saying that the Palestinians no longer wanted to work with the Quartet but instead with countries and organizations on an individual basis. “Russia can play a substantial role” in the region, he was quoted as saying.

Nofal reiterated opposition to the role of the Quartet, saying, “Russia has recognized the state of Palestine since 1988 and has the right to meet with any Palestinian faction.”

As the newly elected US president works on his own foreign policy within his “America First” position, it is clear that the Russians are going to quickly fill the vacuum that is being left by the retraction of the US influence in the Middle East. This retraction in fact began with the Barack Obama administration, and will most probably continue under Trump leaving Russia with the golden opportunity of spreading its wings in the region.

The relative Russian victory in Aleppo, Syria, which has enhanced the new Russian role, will greatly improve this new role for Moscow. While Russia can talk about its vital sphere of interest, it still remains to be seen whether the newfound Russian role in the Middle East will weaken Washington’s attempts to monopolize the Israeli-Palestinian conflict.