Why Putin needs to be part of Trump-Netanyahu peace plan

Prime Minister Benjamin Netanyahu should learn from past mistakes and offer Russian President Vladimir Putin a role and a place in the Middle East, alongside US President Donald Trump. 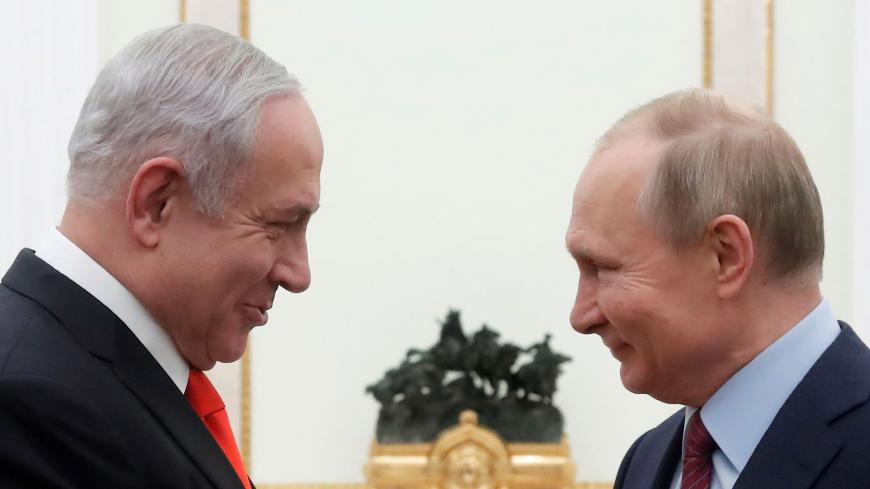 Much has been said and written about the absence of “the bride” (why not "the groom"?) from the Jan. 28 White House launch ceremony of the “deal of the century” for Israeli-Palestinian peace. However, in addition to the absence of Palestinian President Mahmoud Abbas, all the sponsors of the peace process in the past decades — the states that gave the Israeli-Palestinian agreements international validation and funding — also stayed away from the “historic” event. The absence of Russian President Vladimir Putin — the most important foreign player in the Middle East arena — was particularly glaring. Russia’s UN Ambassador Vasily Nebenzya told reporters several hours prior to the event that the United States had not consulted with Russia on the plan and had not even briefed it on its content.

Accused No. 1, Prime Minister Benjamin Netanyahu, against whom an indictment on three charges of corruption was filed with the Jerusalem District Court just hours before the East Room ceremony, prolonged his trip abroad by flying from Washington to Moscow, before returning to Israel. He did not fly to Moscow to seek President Vladimir Putin’s blessing for the US plan. He took the trouble to head there in order to offer a ride at the taxpayer’s expense to a young Israeli woman, Naama Issachar, convicted in Russia of drug smuggling. Putin had pardoned her just hours before Netanyahu’s arrival.

Russia’s negative attitude toward US President Donald Trump’s deal of the century has long been known (more to come on this). Netanyahu is dancing attendance on Putin in the hopes of picking up a few more votes of immigrants from the former Soviet Union in the March 2 elections, at the expense of his Russian-speaking nemesis Yisrael Beitenu leader Avigdor Liberman. At the same time, the head of Israel’s interim government (Netanyahu) is lending a helping hand to Trump’s arrogant policy while pushing Putin aside.

Moscow was a partner in the Israeli-Arab diplomatic process back in the days of the Soviet Empire. Soviet President Mikhail Gorbachev signed the invitation to the 1991 Madrid Conference on the Middle East along with President George H.W. Bush. At the 1993 Oslo Accord signing ceremony, Deputy Russian Foreign Minister Andrei Kozyrev stood alongside Israeli Prime Minister Yitzhak Rabin. Russian President Boris Yeltsin was invited to attend the 1994 signing of the Israel-Jordan peace agreement, along with US President Bill Clinton. US President George W. Bush invited Russia to join the international Quartet that signed the 2003 Road Map for Peace and the 2007 launch of the Annapolis peace process. Russia was among the 40 senior representatives from around the world, among them Pakistan, Saudi Arabia and Yemen, that accepted the invitation to attend, while only three Arab ambassadors — from Oman, Bahrain and the United Arab Emirates — attended this week’s bride-less (or groom-less) wedding.

On a March 2019 visit to Riyadh, Russian Foreign Minister Sergei Lavrov said Moscow and Riyadh had agreed that the solution to the Palestinian-Israeli conflict had to be based on UN Security Council resolutions and the 2002 Arab Peace Initiative. In other words, the solution could not be based on an American plan that ignores international law and the Arab-Muslim consensus anchored in the Arab initiative. In an interview he gave at the time to the Kuwaiti news agency, Lavrov said the format for moving ahead with the diplomatic process was not a US-led plan, but rather joint efforts by the international community as a whole to instigate direct negotiations between the sides. Lavrov accused Trump of abandoning the Quartet Forum — consisting of the United States, Russia, the United Nations and the European Union — in favor of a unilateral plan brokered by a single mediator. The outlines of the plan, Lavrov remarked, contradict the international parameters for an Israeli-Palestinian agreement. He foresaw that the Palestinians would reject the plan, criticized the unilateral measures being taken by the United States and warned against their negative effect on the peace process.

The top Russian diplomat referred in his remarks to Trump’s move of the US Embassy to Jerusalem and his recognition of Israeli sovereignty over the Golan Heights. As to the latter, Lavrov said in April 2019 that the decision had exposed American intentions to destroy the accepted infrastructure provided by international law as the basis for the Middle East issue. The identity of the person behind these unilateral American moves in the Israeli-Arab arena and their main cheerleader is no secret. What's more, Netanyahu himself boasts that he was the one who convinced Trump to pull the United States out of the nuclear agreement with Iran, of which Russia is one of the sponsors.

While Trump admits that he does not care much what goes on in the Middle East, 7,000 miles away, Moscow does care — and how. Unlike Trump, Putin has channels of communication to Iran as well as to the Palestinians. During a September 2019 trip to Moscow, also on the eve of Israeli elections, Netanyahu said the coordination between Israel and Russia in Syria was especially important for Israel given the tensions on its northern border, particularly vis-a-vis Iran’s proxies in Syria and Lebanon and the deployment of precise missiles on their territories directed at Israel’s heartland. “This is an intolerable threat and we are taking action; therefore, we must also ensure that the coordination between us prevents friction,” he said.

It is unclear whether the request by the head of Israel’s caretaker government made an impression on Putin. According to intelligence reports published in the media, the Russian leader ignored Netanyahu’s request that his country take charge of operating the S-300 missile batteries it had supplied to the Syrian army. According to those reports, Russian soldiers are training Syrian soldiers in the use of the precision missiles. The mantra Netanyahu was fond of using about the Palestinians — “If they give, they’ll get; if they don’t give, they won’t get” — obviously has a version the Kremlin knows: Give us coordination on the diplomatic process with the Palestinians, and you will get coordination in averting war with the Iranians.

In his 2001 book “Does America Need a Foreign Policy,” former Secretary of State Henry Kissinger recommended that leaders of the United States and its allies ensure that Russia’s voice is accorded the respect it is due in the newly emerging international order. The man who served as Secretary of State in the Cold War era stressed it is important that Russia feels it is a partner in international decision-making, especially in regard to decisions that impact its security. This recommendation was appropriate at the time. It is doubly so when the resident of the Kremlin is seeking to restore Russia to its Soviet glory days. Then again, it might not be relevant when the resident of the White House is a quick draw facing impeachment, and when the Jerusalemite ally of the US (Netanyahu) is charged with bribery, fraud and breach of trust.