As new global crises overshadow the Palestinian-Israeli conflict, Hamas seeks to give Russia a wider scope of involvement in a variety of Palestinian issues. 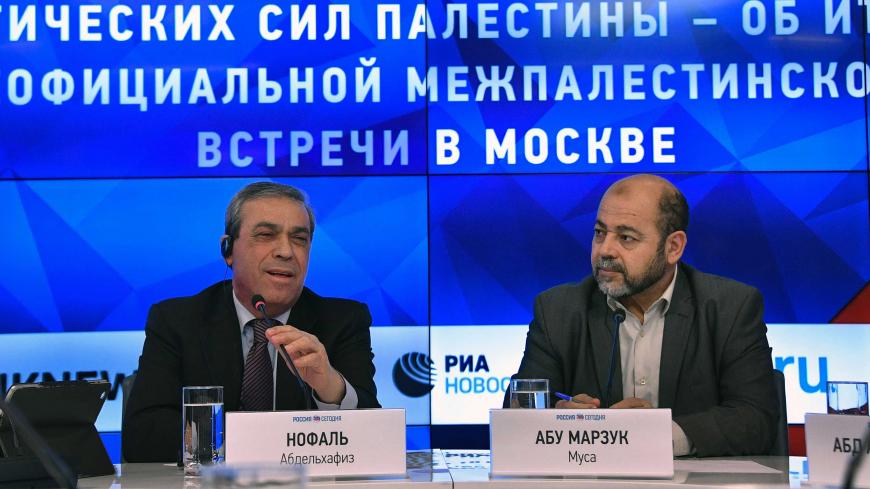 Abdel Hafiz Nofal (L), the Palestinian ambassador to Moscow, and Mousa Abu Marzouk, the deputy head of Hamas’ political bureau, give a press conference along with other representatives of Palestinian political parties and movements in Moscow, Russia, Jan. 17, 2017. - ALEXANDER NEMENOV/AFP/Getty Images

GAZA CITY, Gaza Strip — Hamas describes its recent visit to Russia as productive, and it certainly covered a lot of ground. A delegation of the movement's leaders went to Russia to keep Moscow in the loop on Palestinian-Israeli problems and the Palestinian quest for statehood, to discuss the Palestinian reconciliation and to enlist Russia to pressure the international Quartet to lift the siege imposed on Gaza and provide humanitarian aid.

The delegation's Sept. 18 trip to Russia "tackled the movement's decision to dissolve its administrative committee [in Gaza] and called on the consensus government [in the West Bank] to come to the Gaza Strip and immediately perform its functions and duties amid the movement’s approval to hold general elections," Hamas said in a Sept. 21 statement.

Speaking with Al-Monitor, Mousa Abu Marzouk, the deputy head of Hamas’ political bureau, said, “Our relations with regional and international countries and actors are witnessing an unprecedented openness amid cooperation on several levels." He also pointed out that Hamas and Russia are no strangers, and their cooperation is "not a recent thing."

Russia has maintained positive ties with Hamas since the movement won the 2006 legislative elections in the Gaza Strip. A delegation of the movement's leaders led by the former head of Hamas’ political bureau, Khaled Meshaal, visited Russia that year. Also, Meshaal met in 2010 with then-Russian President (and current prime minister) Dmitry Medvedev in Damascus and with Russian Foreign Minister Sergey Lavrov in Doha in 2015.

"We are ready to cooperate in several fields," Abu Marzouk said. "Russia realizes that we are the most popular and organized Palestinian faction … and the only one which, regardless of the circumstances, holds regular internal elections at the leading, executive and Shura positions every four years.”

Abu Marzouk also said Hamas wants Russia to become more politically involved in the Arab-Israeli conflict, given "the US bias toward the Israeli occupation." He said Palestinians need Russia to exert its influence on the Quartet, which consists of Russia, the UN, the United States and the European Union.

"Russia is part of the international Quartet that imposed a siege on the Gaza Strip," Abu Marzouk said. "This blockade caused great harm to the Palestinians, and it is up to Russia to [help] reverse the situation.”

Hamas also asked for Moscow's help in promoting the Palestinian cause in international forums.

Another Hamas official told Al-Monitor on condition of anonymity, “As Russia invited Hamas to visit the country, the movement took advantage of the invitation to pre-empt any upcoming US steps against it."

Hamas invited Russia to participate in Palestinian affairs, both internal and international, as the global community’s interest in Palestine’s struggles seems to have faded in light of emerging regional crises. Peter Maurer, the president of the International Committee of the Red Cross, said as much during his Sept. 5 visit to Gaza. Maurer said the Israeli-Palestinian conflict had been a top priority for many years internationally, which translated into generous funding to humanitarian organizations, but the issue is not the only one being discussed. He added that other serious conflicts are spurring violence and severe human rights violations and require attention.

"Russia has opened its doors to [Hamas] in pursuit of a new role in the Palestinian issue."

Hani Albasoos, a political writer and political science professor at Islamic University of Gaza, told Al-Monitor, “Hamas is trying to expand the scope of its international relations in light of the regional disputes. For its part, Russia has opened its doors to the movement in pursuit of a new role in the Palestinian issue."

He added, “Hamas gave the green light to Russia to [intervene] in the Palestinian issue, and Russia will play an important role in restoring Hamas' relationship with the Syrian regime. [Hamas] seems more interested in Russia's openness amid the impasse [Hamas] is facing at the international level."

At the local level, Hamas and the Gaza Strip also are suffering under the punitive measures imposed this year by Palestinian President Mahmoud Abbas, which included withholding the salaries of thousands of employees in Gaza.

Yet Youssef Hijazi, a former researcher with the Palestinian Planning Center, which is affiliated with the PLO, told Al-Monitor, "Israel will find it difficult to oppose Russia, should the latter decide to become involved in the Palestinian dossier. Israel needs Russian guarantees against Iran's entrenchment in Syria, so it remains silent about Russia's recent moves toward the Palestinians."

However, Russia will have better luck finding solutions for Palestinians by working with Arab countries and Egypt, Hijazi added. "The Palestinian crisis has reached a stage of complexity that inhibits Russian effort. Russia can only help hold discussions that lead to convergence of views and ideas."

Hijazi said Russia has encouraged Egypt to advocate for the United States and Israel to back off their opposition to Palestinian reconciliation. “Hamas [wants] Russia to thwart US efforts aimed at keeping the movement on the list of terrorist organizations in the world,” he noted.

Despite a clear shift in Hamas' attitude in several areas, the West didn't embrace the policy document Hamas issued May 1, in which it reiterated its refusal to disarm or recognize Israel's right to exist. Russia, on the other hand, acknowledged the document as a good first step.

Russia’s involvement in the Syrian crisis and the Gulf crisis “foreshadows Russia’s potential launch of a new initiative to be submitted to the United Nations, including a political solution to the Palestinian-Israeli conflict," Hijazi added.

Hamas’ frequent visits to Russia reflect both parties' desire to serve their mutual interests through such diplomatic moves. Russia is seeking regional alliances and to improve its image in the Muslim world through Hamas, while Hamas is looking for a real way out of its internal and foreign crises.