Israeli Prime Minister Benjamin Netanyahu demands that Europe "be strict, be strong” vis-a-vis Iran and its nuclear project, while his government continues to violate international law in the occupied territories. 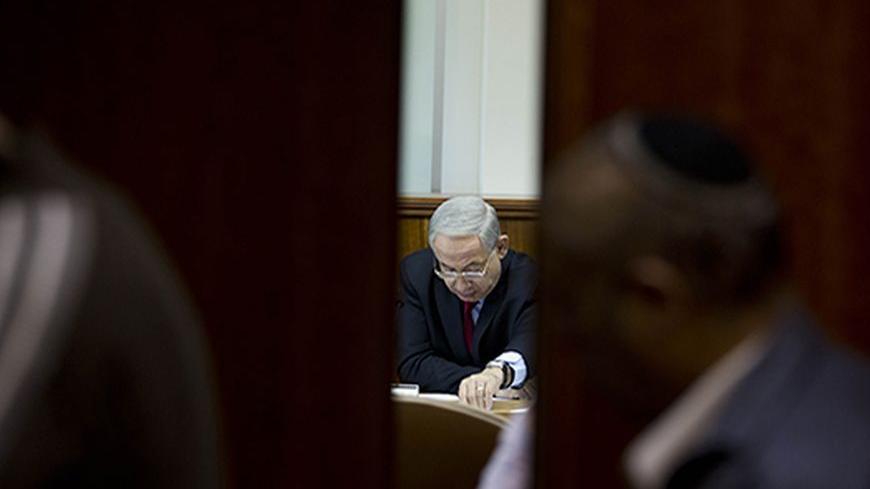 Before the intriguing round of talks held between the P5+1 (the five permanent UN Security Council members and Germany) and Iranian representatives in Geneva on Oct. 15 and 16, Prime Minister Benjamin Netanyahu cleared his crowded agenda for a series of interviews with the leading media of the three European member countries of the forum. He granted interviews to newspapers from Germany (Frankfurter Allgemeine Zeitung), France (Le Monde) and the United Kingdom (Financial Times) and to three TV networks from these countries: ARD TV, France 24 and Sky.

An announcement published by his bureau on Oct. 10 included selected quotes from those interviews with the purpose of pressuring the three Western European governments to continue the sanctions against Iran and even escalate them. “Be strict, be strong,” Netanyahu exhorted, as he warned them against what has been called “Iran’s charm offensive.” He noted that the regime in Tehran has violated all the UN Security Council resolutions with regard to halting uranium enrichment, and now asks for easing of sanctions for “tactical, cosmetic concessions.”

When it comes to the Iranian nuclear program, the sky is the limit with regard to the statuses and positions of Germany, France, the United Kingdom and even the European Union. Suddenly, the European continent is relevant and courted. ­Yet, less than two years ago, in December 2011, the Israeli Foreign Ministry announced that these three countries — together with Portugal — “lost their credibility and made themselves irrelevant.”

This happened on the heels of a statement that same month by their ambassadors at the United Nations condemning the construction in the settlements and the “price tag” phenomenon in the territories of Judea and Samaria. The Foreign Ministry warned that “interfering with Israel’s domestic affair” will harm Europe’s position (the West Bank is not part of the state of Israel’s sovereign territory).

In a statement that can be found on the Foreign Ministry’s website, Israel dictated a detailed agenda for the European members of the UN Security Council. Netanyahu said that they should “concentrate on peacemaking in bloodshedding hot spots such as Syria and … Iran, and on promoting democracy and moderation in Arab countries aspiring to freedom.” And what about the aspirations of the Palestinian nation for freedom?

Just as in the days of former Iranian President Mahmoud Ahmadinejad, Netanyahu’s message to Europe — after Iranian President Hassan Rouhani retracted the Holocaust denial and the call for the destruction of Israel — still included the comparison of Iran to Nazi Germany with a coarse reference to the naivete of the continent’s leaders who were led astray during World War II. Over the years, Netanyahu presented Europe as a mouse, and now he demands that it act like a lion.

Netanyahu did not invent the method; for dozens of years, Europe has been providing grants to Israeli educational and health-related institutions, signing trade and cultural agreements and funding Palestinian security apparatuses that contribute to thwarting terror against Israelis. Yet, after all this, whenever Europe dares to raise a finger in the UN against the settlements or raise a feeble voice against the occupation, Jerusalem raises a hue and cry against “interfering with Israel's domestic affairs.”

Israel cries and Europe — like the United States — gives in. The evidence is scattered in scores of outposts that were established despite European protests and in the demolition orders and removal of Palestinian farmers from their homes and lands, under the noses of diplomats from all over Europe.

The EU has not been successful in reaching a consensus regarding the marking of products produced in the settlements — on a shelf of kosher products in a Parisian neighborhood supermarket, I found the confection halvah produced by one of the factories in the Barkan industrial park in the West Bank; the address on the wrapper was a mailbox in Tel Aviv. At this point in time, there is no practical significance to measures taken against European companies for maintaining ties with settlements.

Senior officials of the EU institutions with whom I met at the beginning of October told me that the “double standard” issue has risen frequently in the talks they hold in New York with members of the Iranian delegation to the UN General Assembly, and not only with regard to nuclearization. “Why do you lecture us about violating UN resolutions, while you ignore the ongoing Israeli violation of international law and UN resolutions in the occupied territories?” they insisted.

The formal response to such questions and arguments is along the lines of: “In these very days, we are actively involved in advancing the negotiations between Israel and the Palestinians.” However, in private talks with about a dozen European officials and diplomats in Brussels and Tel Aviv, all of them expressed emotions ranging from doubt to complete disbelief that the negotiations would lead to the end of the occupation. The most positive sentence that I wrote down for myself was: “For the first time, I heard Saeb Erekat (the Palestinian envoy to the negotiations) saying something positive about the talks with Tzipi Livni (the Israeli envoy) instead of the usual complaints about occupation, settlements and stalling tactics.”

In background talks with a high-placed European official, I received additional confirmation about the information I published in Al-Monitor regarding the linkage created by US President Barack Obama between the negotiation channel with the Iranians and negotiations between Israel and the Palestinians. I was told, “The ending of the conflict between Israel and the Palestinians and a peace arrangement with the Arab countries on the basis of the Arab League peace initiative are a key factor, if not the decisive factor, in the efforts to remove the threat of Iranian nuclearization.”

As always, the main key is in the hands of the United States. However, the crisis in Syria opened the door to additional players, including Russia, the UN and, yes, Europe — all three members of the Quartet that was established by President George W. Bush to promote ''the road map'' for ending the conflict in the Middle East. This is the same Europe that “lost its credibility and made itself irrelevant,” the same Europe that Netanyahu turns to today and demands that it “be strict, be strong” toward a country that does not obey international law, a regime that belittles the accepted position of most of the international community.

Will Europe still remain “credible and relevant” (in Netanyahu’s eyes) in the summer of 2014, should it resolve to “be strict, be strong” toward the right-wing government and the settlers headed by Netanyahu?

Akiva Eldar is a columnist for Al-Monitor’s Israel Pulse. He was formerly a senior columnist and editorial writer for Haaretz and also served as the Hebrew daily’s US bureau chief and diplomatic correspondent. His most recent book (with Idith Zertal), Lords of the Land, on the Jewish settlements, was on the best-seller list in Israel and has been translated into English, French, German and Arabic.