The fate of Iran’s nuclear project will be sealed over the next few months, thus any agreement between the West and Iran that allows it to remain a “nuclear threshold state” will force Israeli Prime Minister Benjamin Netanyahu to act. 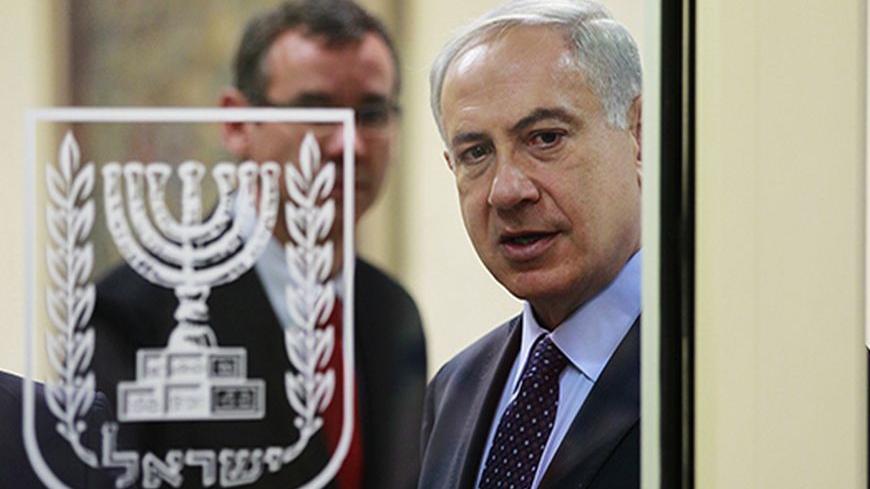 On Oct. 10, the Israeli Air Force (IAF) website posted photos and video clips of a maneuver that was carried out by the air force. In an unorthodox fashion, the footage — featuring IAF jet fighters refueling mid-air by huge refueling planes — was posted as the exercise was still taking place.

At exactly the same time, Israel’s Prime Minister Benjamin Netanyahu was giving yet another series of interviews to European media outlets. The writers of the German Frankfurter Allgemeine Zeitung, the French Le Monde and the British Financial Times, as well as three TV networks from these countries — Sky, France 24 and ARD — seized the unexpected opportunity to take an active part in the second act of Netanyahu’s media blitz concerning the Iranian issue.

The first act, it should be recalled, took place last week in New York and Washington, on the sidelines of the prime minister’s address at the UN General Assembly on Oct. 1. The Defense Minister Moshe (Bogie) Ya’alon, currently in Washington, is carrying a message in the same vein: “The Iranians are smiling. At this rate, Iran will have not two, but 200 bombs, directed not only at Israel but at Europe as well. The Iranians need to be stopped now, while the West still has the upper hand. Be tough, consistent and strong. Don’t let the charm offensive of the Iranian regime fool you. Don’t let it pursue the enrichment process and keep the plutonium reactors in exchange for some cosmetic concessions. If the sanctions are eased, they will surely collapse. Tehran will get everything, and you will get nothing. It will be a fatal mistake with huge global repercussions.”

The publication of the IAF maneuver concurrent with this media campaign is a broad hint, albeit a tad childish, to the whole world. It took place just a few days before the kickoff of the negotiations between the West — the five permanent members of the UN Security Council and Germany — and Iran, which Jerusalem perceives to be a bona fide existential event. To chip away at the European-US smugness and dissipate the premature euphoria around the likely arrangement with Iran, Israel is trying to revive its independent military threat.

Netanyahu now feels that he is facing the pinnacle of his life’s calling, the core of his own private reactor that gets him going. The fate of Iran’s nuclear project will be sealed over the next few months, and by extension the fate of the State of Israel and the Jewish people. No less. The premier keeps on fighting, but it seems to me that even he — deep down — realizes that this is a last-ditch effort.

The following emerges from a series of talks I had this week with present and former Israeli security chiefs: More than likely there will be an arrangement between the West and Iran. “If the Iranians insist on making cosmetic concessions only, it’s possible that there won’t be an agreement.” said former Director of Military Intelligence Maj. Gen. (Res.) Amos Yadlin. Like others, he, too, believes that the Iranians understand the situation and will make the effort to reach an arrangement. They have no other option. The Iranian economy is in a free fall and the public is becoming increasingly enraged. This is also reflected in the internal struggle in Iran between President Hassan Rouhani’s people and the Islamic Revolutionary Guard Corps members and conservative elements associated with the country’s true leader, Supreme Leader Ayatollah Ali Khamenei.

Netanyahu’s demands will not be met, even though these were precisely the same demands of the UN Security Council. This is a small detail that the world has forgotten. Everyone toes the line of compromise and the need to meet the Iranians halfway and reach an arrangement at almost any cost. Israeli experts maintain that the West can and will reach a compromise with Iran on “its right to enrich uranium,” subject to its agreement to a “deep and invasive oversight,” including the implementation of the International Atomic Energy Agency’s (IAEA) “additional protocol.”

Tougher discussions between the parties are likely to take place over Iran’s past violations, the answers it has yet to give to the tough questions submitted by the UN Security Council and the issue of closing the Iranian case and sending it back from the UN Security Council to the IAEA. These are tough yet solvable issues Israeli experts maintain.

So what should the West insist on in its discussions with Iran? What should Israel draw as a genuine “red line,” which — if crossed — will force it to operate independently?

The first point is the number of centrifuges. The Iranians will obviously try to secure a “freeze.” In other words, they want to keep the same number of centrifuges they have today, roughly 18,000. This must not be allowed. The compromise, according to some assessments, will allow Tehran to keep a couple of thousand.

Another issue that the West should insist on is the removal of enriched material from Iran and having it returned in the form of fuel that cannot be reconverted for making a bomb. The Iranians will make a demand to store the material in their country under international supervision. Ultimately, according to Israeli assessments, the 20% semi-military grade enriched uranium will be removed, and only low-grade enriched uranium will be allowed to remain in Iran under supervision.

What we are left with are two important strategic installations. The first one is the Fordo enrichment facility. The West will demand to shut it down, while the Iranians will propose to keep it under tight supervision. The second one is the reactor in Arak. The West will demand that it not be activated, whereas the Iranians will insist on opening it, but are likely to concede in the end.

In other words: both sides have some wiggle room. An arrangement can be reached that will make the West very happy. While Israel might not be wholly satisfied, the arrangement could be good enough to avert a military operation on its part. The problem is that Netanyahu’s “red line” from his UN address last year is now viewed as a major strategic snafu for Israel. That red line only tackles one dimension: the level of enriched uranium. It ignores, however, the more important crosswise elements that could keep Iran as a “nuclear threshold state,” namely the number of centrifuges, the quantity of the enriched material and the installations in Fordo and Arak. The discussions on these three topics will determine the outcome of these negotiations.

In the end, the future agreement should be measured against one question: To what extent will it distance Iran from the bomb? A reasonable and acceptable agreement should keep Iran away from the bomb threshold for a number of years rather than just a few months or weeks, which is the case today. Put differently, the quantity of enriched uranium that Iran would be allowed to keep should be negligible. The number of centrifuges should be limited and the installations in Fordo and Arak should remain inactive.

What would be a bad agreement? This would be an agreement that bans Iran from enriching uranium above 5% while allowing it, however, to keep the already enriched material as well as the centrifuges it has already installed (or a similar number), and also allowing it to keep all the installations operational — or nearly so.

Such an agreement, Israel is saying, will force Netanyahu to do what he has been threatening to do for years, although he is likely to face serious issues of international legitimacy as well as a tough debate at home.