Al-Monitor’s coverage of Iran as negotiations commence this week in Geneva with expectations of progress on the nuclear file, and implications for Syria and the region. 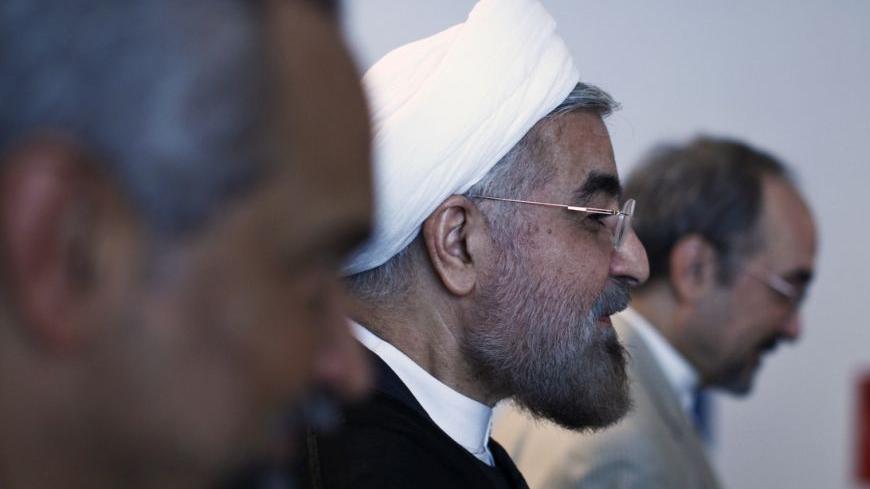 Iranian President Hassan Rouhani walks next to delegate members after speaking in a High-Level Meeting on Nuclear Disarmament during the 68th UN General Assembly in New York, Sept. 26, 2013. - REUTERS/Eduardo Munoz

As the latest negotiations over Iran’s nuclear program with the P5+1 start in Geneva on Tuesday, it is worth recalling the collective wisdom of the US intelligence community about Tehran’s nuclear calculations, per the testimony of James Clapper, US Director of National Intelligence, before the Senate Select Committee on Intelligence on March 12, 2013:

“We assess Iran is developing nuclear capabilities to enhance its security, prestige, and regional influence and give it the ability to develop nuclear weapons, should a decision be made to do so. We do not know if Iran will eventually decide to build nuclear weapons.”

This was the assessment before the election of Hassan Rouhani as president of Iran, and should be kept in mind by pundits claiming knowledge of what Iran “really” plans to do with its nuclear program.

Since Rouhani took office on Aug. 4, all signs are that Iran is approaching the nuclear talks with a newfound urgency, which will rightfully be tested in Geneva, where Laura Rozen will cover the meetings for Al-Monitor’s Backchannel.

As Kenneth Pollack wrote for Al-Monitor:  “The claims that Rouhani is a “wolf in sheep’s clothing,” that he does not represent a significant change in Iran’s demeanor, simply does not stand up to scrutiny. This is neither the time nor the place for a full explication of the evidence — there is too much to be presented in a short essay, and with the nuclear talks about to begin, Iran’s behavior in those talks should be allowed to stand as the best proof for either theory.”

While Israeli Prime Minister Benjamin Netanyahu is on a campaign to keep the international heat on Iran, Ben Caspit wrote from Jerusalem, that even here there may be room for compromise:  “An arrangement can be reached that will make the West very happy. While Israel might not be wholly satisfied, the arrangement could be good enough to avert a military operation on its part. The problem is that Netanyahu’s “red line” from his UN address last year is now viewed as a major strategic snafu for Israel. That red line only tackles one dimension: the level of enriched uranium. It ignores, however, the more important crosswise elements that could keep Iran as a “nuclear threshold state,” namely the number of centrifuges, the quantity of the enriched material and the installations in Fordo and Arak. The discussions on these three topics will determine the outcome of these negotiations.”

In exclusive remarks to Shlomi Eldar, Israeli Finance Minister Yair Lapid drew his own "red line" on Iran, calling for no centrifuges and no plutonium, while advocating diplomacy backed by the threat of force.  Lapid, who attended the UN General Assembly meetings with Netanyahu earlier this month, said with regard to Iran, “they’re talking, so one must listen.”

Iran may already be modifying its regional policies in Syria and Lebanon. As Geoffrey Aronson wrote: “the arena where the most practical operational and policy changes in the regional landscape are now occurring is not in Iran at all, but elsewhere — foremost in Lebanon and Syria. For critics and enthusiasts searching for signs of real progress in establishing a solid foundation for productive diplomacy on Iran, better today to look not simply and directly at Iran but in its regional reflections, often in faraway corners where in both word and deed, long-lived zero-sum thinking is being challenged by effective win-win solutions.”

Aronson observed that in Lebanon the US-backed Lebanese Army, with the acquiescence of Hezbollah, has taken up positions in Beirut’s southern suburbs.  Aronson writes that an expected surge of Hezbollah troops into Syria does not seem to be taking place, adding that while there “may be no direct connection to narrow Iranian-US relations and certainly not to the question of Iran's nuclear program. But Syria is the arena where the basic prerequisites for progress on the US-Iran agenda — recognizing core interests and fashioning mechanisms to safeguard them — are being forged in word and in deed.”

Iranian Foreign Minister Javad Zarif told Al-Monitor on Sept. 30 that Iran “had a lot of diplomatic contacts [leading up to the US-Russia chemical weapons framework]. … We were in Moscow when the agreement was reached at the level of deputy foreign minister,” and offered assistance with implementation of the agreement to destroy Syria’s chemical weapons.

A growing consensus on Iranian participation in a Geneva II conference, as called for in this column since May, appears to be gaining momentum. UN Undersecretary-General for Political Affairs Jeffrey Feltman told Asharq Al-Awsat on Oct. 4: “It is hard for me to imagine having a solution in Syria that works if Iran isn’t somehow engaged and involved in this, in one form or another. But as I said, we are focused on how you would implement the Geneva action plan from last year, so we would want to make sure that whoever accepts the secretary-general’s invitation to participate understand that they are there to show support for a political solution based on the Geneva communiqué. So whether they are the regional, international, or Syrian parties, they need to make sure that they are there to implement Geneva. So should we be engaged with Iran or not? Yes, I think we should be engaged with Iran.”

Iran’s new assertiveness in regional affairs also has implications for the Israeli-Palestinian peace process. Hazem Balousha reported from Gaza that Palestinian Islamic Jihad is nervous that a warming trend in US-Iran relations could reduce Tehran’s support, and Ali Hashem writes from Tehran that the anticipated visit of Khaled Meshaal, the head of the Hamas political bureau, to Iran to rebuild ties that have been frayed over Syria is likened to the return of the prodigal son.

Ali Hashem further reported from Tehran this week that the decision by Iran and the United Kingdom to establish non-resident charges d’affairs offices, represents “a new strategy adopted by both Tehran and London that is expected to reflect positively on both the bilateral relations and the nuclear round table.”

Finally, in an exclusive interview with Al-Monitor’s Mustafa Al-Kadhimi, Iraqi Prime Minister Nouri Al-Maliki said: “We are optimistic about the possibility of real progress in relations between these two countries [the US and Iran] this time, because of the positive atmosphere, ripe conditions and seemingly serious intentions on the part of both countries. We announced that we are ready to help resolve this problem and help make things better. This will achieve our national interests, in addition to what it achieves for the interests of these two nations. It also supports security and stability in this incredibly tense region. We believe that normal relations between the United States and Iran will serve the interests of stability in the region and Iraq.”