Time to close deal with Iran

An agreement with Iran would be a win, if not a breakthrough, for US interests and allies in the Middle East. (Updated) 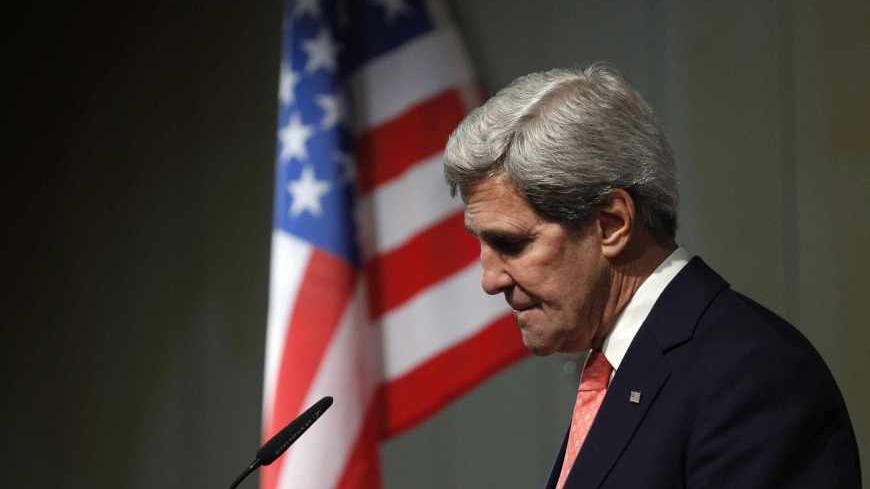 US Secretary of State John Kerry speaks at a news conference at the end of the Iranian nuclear talks in Geneva Nov. 10, 2013. - REUTERS/Jason Reed

A first-step agreement on Iran’s nuclear program is within reach when talks resume in Geneva on Nov. 20.

Closing the present deal with Iran represents a potential breakthrough not only for addressing Iran’s nuclear program, but also for a political solution in Syria, with the potential for a wider discussion of regional security in the Middle East.

The draft text that the five permanent members of the UN Security Coucil plus Germany (P5+1) presented to Iran on Nov. 9 would cover six months while a final deal is negotiated. The contents of this first-step agreement reportedly include increased inspections and monitoring of Iran’s nuclear facilities; new limits on enrichment, including suspension of enrichment at the 20% level; and a freeze on centrifuges and dual assembly development at the Arak heavy-water reactor, all in return for less than $10 billion in sanctions relief, which means unfreezing some Iranian assets held in banks abroad and waivers on sanctions on auto sales, petrochemicals and precious metals, as Laura Rozen writes this week.

Israeli Prime Minister Benjamin Netanyahu has been campaigning against the proposed deal, arguing that it gives up too much in sanctions relief and does too little to slow Iran’s nuclear program. As Ben Caspit points out, Netanyahu’s opposition to a deal with Iran is in part reflective of a general Israeli wariness about Iran’s intentions. Many members of Congress share Netanyahu’s skepticism and have joined him in calling for more sanctions on Iran. Rep. Mike Rogers (R-MI), chairman of the House Permanent Select Committee on Intelligence, told Al-Monitor this week that given the worries of Israel, Saudi Arabia and other allies, it is "too early” for an agreement and “with another round of sanctions, we’ll get something that is meaningful.”

Enacting more sanctions, however, could risk undermining Iranian President Hassan Rouhani. His foreign minister, Mohammad Javad Zarif, is already on a razor’s edge carrying out Supreme Leader Ayatollah Ali Khamenei’s probably limited mandate to close a deal. Khamenei did not empower Zarif to negotiate for more sanctions. Zarif’s time may be short if he cannot show a path to an endgame of sanctions relief. He has treated the talks with urgency while contending with the opposition of Iran’s hard-liners.

If the objective of the United States and its allies is to assure that Iran’s nuclear program is for civilian use only, the draft agreement, as a first step, should be a no-brainer. The alternative to the proposed deal — no deal and more sanctions — could mean more enrichment (rather than limited enrichment and suspension at the 20% level), more centrifuges (rather than a freeze), more fuel-assembly development at Arak (rather than a stop), less transparency in inspections (rather than more), a weakened Rouhani (rather than empowered anti-US hard-liners) and the end of the diplomatic track (rather than a solid start).

For those who are skeptical of Rouhani, it is instructive to read the latest quarterly report of the International Atomic Energy Agency (IAEA) on Iran’s nuclear program, released Nov. 14. As Barbara Slavin writes for Al-Monitor, the IAEA reports that roughly since Rouhani took office in August, Iran’s stockpile of enriched uranium at the levels of up to 5% and up to 20% “remain similar” to those of the previous report, no additional centrifuges have been fed with enriched uranium and no additional fuel assemblies have taken place at the Arak heavy-water reactor. The report also describes the “Joint Statement on a Framework for Cooperation” signed on Nov. 11 between Iran and the IAEA to improve the monitoring body's access to key sites and information.

A deal with Iran would facilitate Iranian cooperation to end the war in Syria. An official Iranian source told Ali Hashem that the United States and Iran have discussed Syria in side talks during the nuclear negotiations. There is an understanding that talks on Syria could pick up once a nuclear deal is agreed upon. According to this source, Saudi concerns about a nuclear deal with Iran are linked to Syria: “It’s not right to say that Israel and Saudi Arabia didn’t want a deal for the same reason. The Saudis’ main reason was Syria. They don’t want US-Iranian talks on Syria, because they know this will affect their vision there.”

President Obama will meet Tuesday with senior lawmakers in an attempt to hold off attempts to add more sanctions on Iran, including as part of the National Defense Authorization Act, which could be taken up in the Senate this week.

Many Republican, and some Democratic, Senators did not find the appeal last week by Secretary of State John Kerry and others in the administration persuasive. On November 15, Senators Marco Rubio (R-FL), Kelly Ayotte (R-NH), Mark Kirk (R-IL) and John Cornyn (R-TX) wrote to President Obama arguing for more sanctions

While Obama’s popularity has recently taken a hit because of the negative reaction to the Affordable Care Act and the problems with its rollout, the president should be better placed to manage the politics of the Iran issue than if the Republicans were in control in the Senate, or if the legislative action was with the Republican-controlled House of Representatives.

In sum, the first-step draft agreement is a potential breakthrough in addressing Iran’s nuclear program and recasting over three decades of hostility in the region. The United States should also address Iran’s desire for an endgame that includes full sanctions relief. For relief from the Iran Sanctions Act, the core sanctions legislation, the president must certify to Congress that Iran no longer seeks to acquire weapons of mass destruction, no longer supports terrorism and no longer represents a threat to US interests and allies. There are human rights stipulations in other sanctions laws. These are among the core issues of regional security and, if pursued, the conversations would quickly get to such topics as the future of Lebanon and Hezbollah. Here, too, it is hard to see how the United States and its allies lose from beginning such a dialogue.

The Week in Review has been updated with additional information on the potential path of the National Defense Authorization Act in the Senate.