What message is Saudi Arabia sending with war games?

Saudi Arabia has just finished its largest war games in recent history, signalling its intent to develop its military capabilities in an increasingly unstable region. 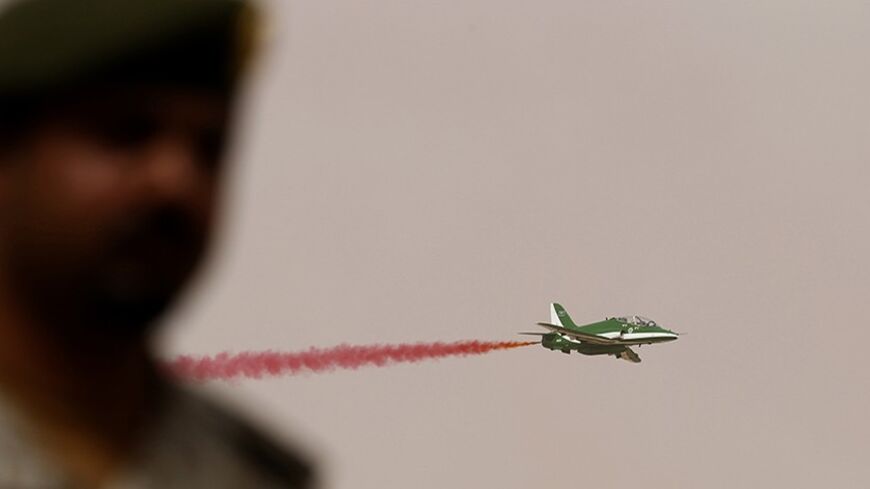 A member of Saudi security forces attends Abdullah's Sword military drill as a jet flies by in Hafar Al-Batin, near the border with Kuwait, Apr. 29, 2014. - REUTERS/Faisal Al Nasser

Saudi armed forces ended on April 29 what was considered their largest military exercises in recent history. They included the broad participation of all military and security sectors affiliated with the ministries of defense, interior and national guard.

Al-Riyadh newspaper said that the maneuvers sent a strong message that the kingdom and its army are ready and capable to respond to any national security threat in light of the challenges, instability and unrest in the surrounding countries.

Saudi Arabia considers the events in the Arab world for the past three years as disorder and chaos that are aimed at the stability of the countries in the region and threaten their security. Confronting these changes will be based on security and military measures: security measures to deal with the internal situation and military measures to deal with potential external threats. And this is accomplished by increased arms spending and training for the military forces.

Saudi Arabia is facing three fronts that may represent a serious threat to its national security: Syria, Iraq and Yemen. In Syria, the Islamic State of Iraq and al-Sham (ISIS) is a potential threat. This group includes Saudis and so-called “immigrants” from many countries, and has several thousand members. The pressure and the encirclement against ISIS in Syria and Iraq may push its fighters north toward Turkey or south toward Saudi Arabia.

The Syrian regime represents another serious threat, especially since it realized that it is threatened with extinction. The Shiite militias in southern Iraq are another threat, whose danger increases if Iraq slides into civil war and the tension between Tehran and Riyadh remains unresolved.

Several videos have spread showing ISIS members and fighters burning their passports. Those featured in the videos include Jordanians and Saudis, and they do not hide their enthusiasm to one day fight in Jordan, Saudi Arabia and other places. There have also been threats against Saudi Arabia and Kuwait by the commander of the so-called Mukhtar Army, an offshoot of Hezbollah in Iraq.

The danger posed by ISIS and the Shiite militias is made worse by the fact that the political process in Iraq is prone to collapse if the Islamic Dawa Party, led by Prime Minister Nouri al-Maliki, continues to rule Iraq after the next election. This is because a victory for the party could prompt the Kurds to implement their threat to secede and will push the Shiite political forces in southern Iraq to resist Dawa’s predominance. It will also push the Sunnis of Iraq to line up behind the tribes’ revolution. This may spark further confrontations, potentially pushing Iraq toward the Syrian model, and open serious gaps for security disturbances on Saudi Arabia’s roughly 1,000-kilometer (621-mile) northern border with Iraq.

In Yemen, al-Qaeda is showing signs that it is in the process of moving to a new phase of confrontation with Yemeni state institutions and perhaps with Saudi Arabia. A video has surfaced showing the leaders of al-Qaeda in the Arabian Peninsula celebrating those who were smuggled out of a Sanaa prison in February, as a show of force and a threatening message to the governments of Yemen and Saudi Arabia.

The Houthis are also becoming more militarily active in northern Yemen, and are expanding their areas of control. This is increasing the danger on Saudi Arabia, especially if the national dialogue in Yemen breaks down amid al-Qaeda’s expansion on the one hand and the pressure coming from the Houthis on the other.

In addition to those conventional threats is the threat of cyberwarfare. Thus, the Saudi military exercises, dubbed the “Sword of Abdullah,” included training on electronic warfare, which is no less dangerous than conventional threats. Cyberattacks could target banks, desalination plants and airports, especially since Saudi Arabia’s cyberinfrastructure is still weak and considered high risk.

The cyberattack on Aramco petroleum company in 2012 has shown that anyone can access one of the most important sites of the Saudi economy. According to former US officials, Iran may have been behind the attack, which targeted 30,000 computers and caused significant losses for Aramco.

US Defense Secretary Leon Panetta described the Shamoon virus, which targeted Aramco, as the most destructive attack so far.

Iran’s capabilities in electronic warfare are a challenge for the Gulf states, whose electronic infrastructure is weak. A report released in April by the Institute for National Security Studies in Israel (INSS) showed that Iran has cyberwarfare capabilities that make it one of the most active players on the international scene. Last February, Supreme Leader Ayatollah Ali Khamenei urged Iranian students to prepare for cyberwarfare.

Saudi Arabia has recently become interested in this kind of warfare. Al-Arab newspaper reported last week that the Saudi Defense Ministry is planning to establish an institute for electronic warfare. It will be based in the eastern region of the kingdom, where the important oil installations are located.

To face the repercussions of the Arab Spring, Saudi Arabia has opted for more internal “securitization” and may move for more external “militarization.” Saudi Arabia has expanded military spending to reach $67 billion a year, ranking fourth worldwide after the United States, China and Russia.

One of the biggest arms deals by the Saudi government in recent years was a deal to buy 72 British Typhoon jets for 4.5 billion pounds ($7.57 billion) and 84 American F-15 jets for $29.4 billion.

Saudi Arabia also signed a contract worth $10 billion with General Dynamics to buy an undeclared number of armored vehicles, and there were reports that the Obama administration intends to sell drones to Saudi Arabia.

Even though Saudi Arabia relies heavily on US armament and training, the Saudis wanted to convey a message through these maneuvers and the diversity of arms sources that the development of US-Iranian relations will not take place at their expense. Despite the defense relationship between Washington and Riyadh, the latter does not wish to remain completely subordinate to the priorities of US policies in the region. The Saudi push to improve its military capabilities is yet another example of Riyadh pursuing its own course as the United States reassesses its role in the region.