Structural reforms to facilitate entrepreneurship by Iranian women would be a boost for Iran’s economic growth. 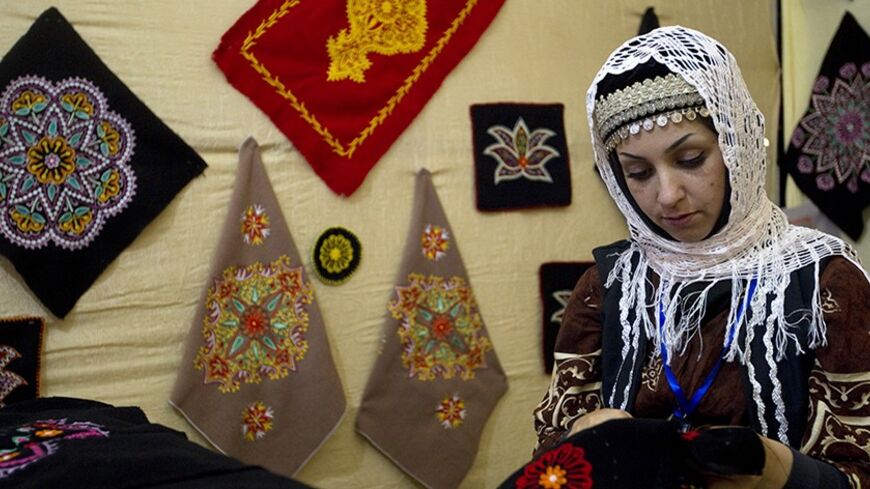 A woman works on a traditional embroidery at a handicraft exhibition in Tehran, June 13, 2011. - REUTERS/Caren Firouz

Iran is facing a socioeconomic issue in women’s unemployment. According to an article published in the March 2014 issue of Iran Economics, only 13% of the workforce consists of women and the latest official statistics for women's unemployment stands at 15.6%, though unofficial unemployment figures for this group is 38.3%. Furthermore, only 9.2% of the entrepreneurs in Iran are women.

It is true that these figures are somewhat distorted, as many women in Iran decide not to enter the official workforce due to social limitations and prefer to work from home. Based on many studies, a sizable segment of Iran’s unofficial economy consists of women’s occupations that are carried out in their homes (from tailors to hairdressers to caterers). However, when one looks at younger women who are looking for employment, the country is facing an unemployment rate of 42.7% in the age group between 18 and 24. According to Mohsen Ranani, professor at the University of Esfahan, some 75% of female university graduates remain without an appropriate job, and that is a heavy price for a country that is aiming to grow its economy.

Traditionally, Iranian women have had an important role in the rural household economies, not just by contributing to the family business — whether weaving carpets or working on the farm — but also by producing the main food items for the family. Interestingly, some 90% of Iranian women in rural communities are still engaged in some sort of revenue-generating activity within the household or in the family business. The problem starts when one looks at Iran’s growing urban population. In fact, fast-pace urbanization and industrialization has changed the role of women and once accompanied with the social limitations of post-revolutionary Iran, the role of women in economic activities has been reduced to a minimum.

Notwithstanding, in the past few years, one of the positive indicators in Iran’s socioeconomic developments has been the growing presence of female students in higher education. In fact, over the past five years, an average of 60% of university students were women. However, success in attracting women to higher education has not translated into a growing role of women in entrepreneurship and economic activity. In other words, the government has been successful in removing the educational obstacles to women’s participation in the workforce, but has failed in removing all other barriers.

According to Iran Economics magazine, the obstacles to a larger role of women in the Iranian economy include:

However, despite the overall negative climate for women to contribute to economic activity, there are some underlying positive currents. The growing presence of women in higher education is gradually having a positive impact on perceptions in the average Iranian family. No one can argue anymore that women are less capable than men — the competition for university places proves the opposite. Furthermore, the actual performance of women in the workplace is transforming the misperceptions about their capabilities. Another positive parameter is the economic need of young urban families for two incomes, which compels the younger generation to look more favorably at women working outside the household.

Other phenomena produce mixed signals. On the political level, while the role of women in government is on the rise (in the form of vice presidents, deputy ministers, mayors, etc.), only 3% of the country’s Majles deputies are female. Nonetheless, there are areas where women have a strong impact to change perceptions: For example, a considerable segment of the internationally recognized Iranian film directors are women. Famous actresses and sportswomen are also making a major impact on empowering Iranian women and changing social perceptions. Furthermore, women’s role as university lecturers and scientists is on the rise.

Essentially, socioeconomic developments are gradually changing social and cultural perceptions in a country in which the traditional and conservative elements remain powerful. Interestingly, even in the more traditional frame of mind in Iran, officials and experts wish to see a greater role for women. Monireh Nobakht, who is a member of the Women’s Socio-Cultural Council, argues that one should not just see a role for men in the economy. She states that the economic impact of women in Iran can also be seen in their contribution on streamlining the consumption patterns in Iranian households.

Even though a number of nongovernmental organizations have addressed the issue of women’s entrepreneurship and participation in the economy, the actual results have been disappointing. Therefore, the new government needs to address the above-mentioned barriers and help transform outdated perceptions. A good starting point would be to change some of the laws and regulations impeding women’s participation and also to appoint capable women as directors of governmental enterprises. Furthermore, the government can provide for targeted campaigns to promote women’s entrepreneurship through allocating bank facilities and other support programs that will generate a greater confidence among key social constituencies in the capabilities of women in economic activities. There is no doubt that Iran’s ambitious economic growth objectives would be achieved more feasibly, if the role of women would grow in the country’s economy.