Why Turkish women are opting out of the workforce

A deeply patriarchal culture, work environments unfavorable to a healthy balance with family life and internalized gender roles keep many women in Turkey uninterested in taking advantage of opportunities to work. 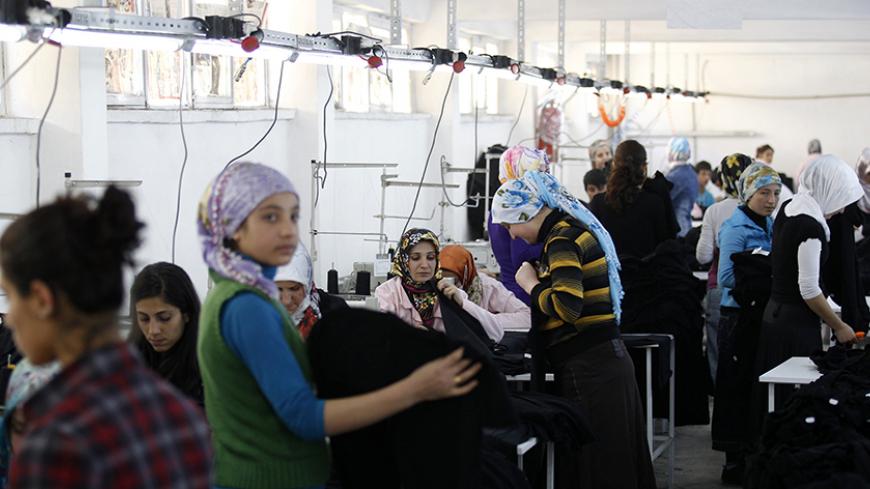 Women work at a textile factory in Kozluk, a town in the southeast province of Batman, Turkey, April 21, 2011. - REUTERS/Umit Bektas

On March 4, Kadir Has University released the results of “Public perceptions on gender roles and the status of women in Turkey” study. Data gathered from 1,200 people in 26 districts show that for 77.8% of respondents, the most important problem women face in Turkey is violence. Among female participants, other burning issues included “inequality” (41.8%), “lack of education” (34.8%), “peer pressure” (30.7%) and “family pressure” (26.5%).

The study showed that 64.8% of female participants are currently unemployed and 70.2% have never held a job. In one of the most striking findings, 72.2% of women responded negatively to the question “Would you like to work?” The women cited as needing the following to consider working: 47.9% father/husband/family permission, 41.5% education and 27.9% a safe working environment.

This documented hesitance of women to work is compelling evidence of the effects of a patriarchal culture, work environments unfavorable to a healthy balance with family life and internalized gender roles.

But since everything is highly politicized in Turkey, a sane debate on any issue is rarely possible. The proponents and opponents of the ruling government interpret such figures through their own political lenses. The first group emphasizes legal improvements toward greater gender equality and slight increases in labor force participation over the years as remarkable successes. The latter group focuses on highlighting the government’s failures to address women’s issues in Turkey.

One thing is clear, according to the Global Gender Gap Report of 2015: Turkey ranks 130th out of 145 countries on this issue. In a written statement on the occasion of International Women’s Day, the Turkish Industry and Business Association reminded Turkey that 33.6% female labor participation is very low, and that 11.5 million women cannot join the workforce due to obligations at home. Turkey also has a huge problem with unregulated informal work by women.

Turkish Family Minister Sema Ramazanoglu recently cited early marriage, underemployment and a lack of access to education as the main drivers of female poverty. The latest data from the Turkish Statistics Institute confirms that increases in women’s education equals higher participation in the workforce, as 71.3% of those with post-graduate degrees work. But the literacy rate among women remains a fifth of that among men. In 2014, 9.2% of women could not read or write in Turkey, versus 1.8% of men. Nevertheless, efforts directed at solving the education problem have proven insufficient without simultaneous addressing of related issues.

“Dad, send me to school,” an award-winning project initiated by the Dogan Group in 2005 and undertaken by the Aydin Dogan Foundation in 2015, aims to create equal educational opportunities for young girls across Turkey. Hanzade Dogan Boyner, the head of the organization, explained in a recent interview with Haber Hurriyeti, “Even if we opened a school at each corner and gave each girl a scholarship, we can't solve this problem without changing mindsets.”

A study called “Research on problems and obstacles for the promotion of women working in the service sector,” published by the Women and Democracy Association (KADEM) Feb. 16, provides a thorough analysis of the problems that working women in Turkey face. It focuses on the education, health and financial sectors, in which women are heavily represented. It surveyed 2,040 women working in 306 institutions equally representing schools, hospitals and banks in 12 different cities. Family responsibility, working hours that are more convenient for men than women and the role of social relationships are cited as some problems that keep women in low positions or out of work. Furthermore, the report stated, “It is a matter of fact that women’s personal choice has been colored by the traditional social norms through their socialization process.”

Regardless of whether they are officially employed, the burden of housework always falls on women. The Kadir Has study shows that for women in Turkey, important determinants of life satisfaction include the quality of their relationships with their husbands and their husbands' happiness. In that light, 35.3% of women responded positively to “Women should not work without their husbands’ permission.” Being a good spouse and mother matters a lot in Turkey.

The lack of widely available child care in Turkey often leaves women to solve this essential need on their own. Accordingly, the KADEM report states that 61.4% of women are opposed to working after they become mothers. Among married working women, 53.2% believe that women with small children should not work.

Academic Ipek Ilkkaracan points out that the majority of women in Turkey participate in the labor market at some point, but only for a couple of years. The problem there, writes Ilkkaracan, is “weak labor force attachment.”

Turkey still has a long way to go, and it is important to remember the wide variety of women’s experiences and preferences. United efforts by the private and public sectors should continue, and more brave role models are needed to help build a more positive trajectory for women. There has been so much exhausting tension in Turkey lately, it almost makes a person dare to be an optimist about future for a change.