Will new Egyptian employment law help its women lean in?

Nearly five years after the revolution, Egyptian women still face much the same obstacles in the workforce as the economy continues to limp along without their full participation. 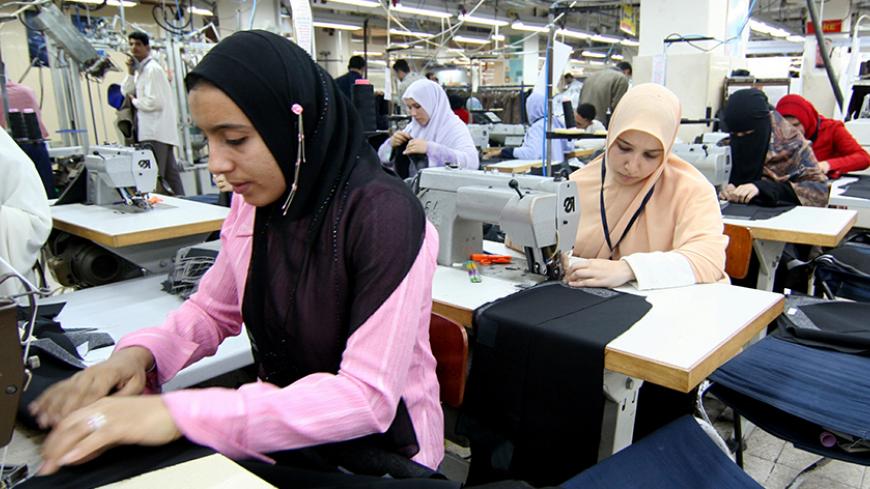 CAIRO — On the occasion of the World Day for Decent Work on Oct. 7, the Central Agency for Public Mobilization and Statistics issued a media statement exposing the working conditions and general situation in Egypt based on a study it conducted of the labor force in 2014. The data revealed that the participation of men is three times higher than that of women in the workforce.

Egyptian women face a number of problems that limit their ability to work. Rawateb.org has identified four factors behind these obstacles: balancing career and family, a reluctance to hire women who have children, gender discrimination and harassment.

Mona Ezzat, the director of the Women and Work Program at the New Woman Foundation, told Al-Monitor, “Women should have an adequate representation at the Supreme Council for Wages, which should be given the power to handle complaints from women workers in case they were subjected to any form of discrimination.”

Ezzat confirmed that there is a gender wage gap and attributed it to a lack of adequate measures designed to achieve equal working opportunities such as the provision of nurseries and safe transportation. These factors, she said, make it difficult for women to work during specific hours, push them to work extra hours and prevent them from going to work in locations that are far from their places of residence. All this obstructs their promotion and training.

The unemployment rate for women in Egypt is more than double that for men. According to a report by CAPMAS issued in February 2014, women's unemployment reached 24% in 2013, compared with 9.8% for men.

According to a study on women and work by the Social Research Center at the American University in Cairo in 2009, women's low participation in the labor market is a costly burden, particularly for developing countries like Egypt, cutting down on opportunities for economic growth.

The study noted that the main obstacles to women's participation in the labor market are the social conditions that still hinder the advancement of women at work. Amirah El-Haddad, a professor of economics at Cairo University, noted in the same study that Egyptian women in the official labor market made up only 19% of the total labor force in Egypt from 2001 to 2007. This rate is lower in the private sector in particular, where it reached only 16% compared with 26% in the public sector during the same period.

Haddad told Al-Monitor that these rates have undoubtedly declined in light of the economic conditions in the private sector following the January 25 Revolution, which resulted in businesses dismissing some workers to reduce costs. She added, “The dismissals certainly came at the expense of women.”

Haddad indicated that the reason behind women’s low participation in economic activities is gender discrimination, a structural problem in the Egyptian labor market in the form of occupational segregation or wage discrepancies.

Haddad stressed that to encourage the private sector (the largest source of employment in Egypt) to provide women with more job opportunities, business owners should be given incentives such as tax breaks to hire a larger number of women.

The Egyptian government is working on a new labor law to offer workers, especially women, more rights, and its provisions are being finalized.

Haddad added, “If employers are subject to specific obligations regarding the rights and responsibilities granted to women they employ, this will limit work opportunities for women.”

Egyptian women suffer from high illiteracy rates, which reached 37% compared with 22% for men, according to a 2006 CAPMAS study. Only 52% of women hold a school degree (elementary or beyond) compared with 63% of men in 2004, the most recent statistics available indicate.

Haddad concluded, “The higher the education level is, the higher women’s ability to hold a good job with a good salary in the public sector and to overcome occupational discrimination against them."