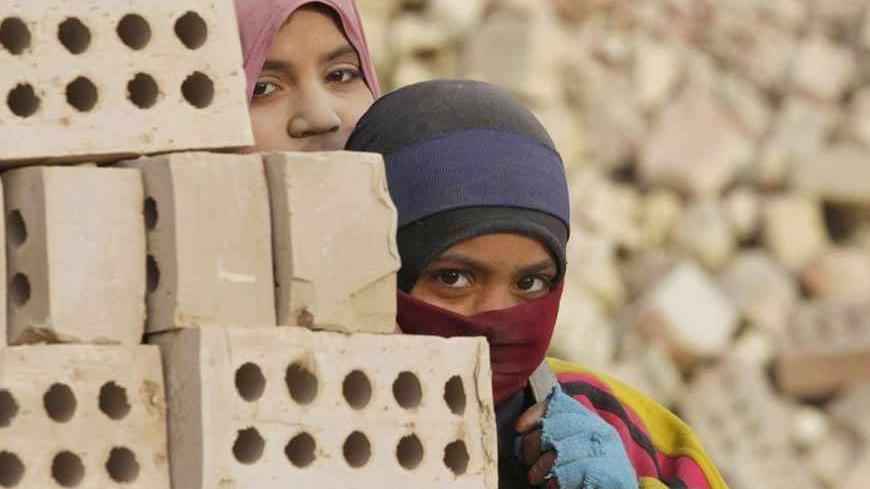 Iraqi women work in the brick factory in the town of Nahrawan, east of Baghdad, March 8, 2012. - REUTERS/Thaier al-Sudani 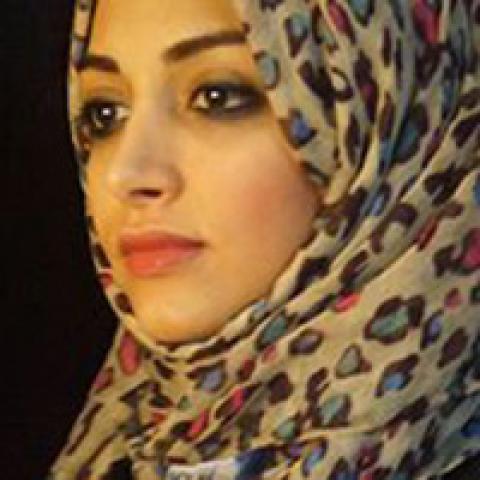 Women in Iraq have made huge leaps in terms of obtaining the right to work and participate in the economy. Nevertheless, they are still subject to sexual and social discrimination, not to mention their inability to get suitable job opportunities amid declining economic growth and the deteriorating security situation. According to the indices of the latest report issued by the Central Bureau of Statistics in the Iraqi Ministry of Planning in August 2012, the percentage of women working in a sector other than agricultural in Iraq in 2011 increased to 14.7%, compared with 12.1% in 2008. Erbil comes in first place, while Baghdad witnessed an increase from 13.4% to 18.9%.

The report indicated that there is a high percentage of women who are educated and competent, but who have not entered the labor market. Israa Ibrahim, who graduated from university in 2006 with a degree in chemistry, searched for work for years. Ibrahim told Al-Monitor, “Suffering is the only common ground between Iraqi men and women. The transition from studying to working is a problem for both genders. I searched for a job for three years, but in vain. Finally, a political figure pulled some strings to get me into my current job.”

Israa mentioned that her uncle, who holds a master's degree in international law, paid $5,000 to a member of a political party to get a job teaching at a university in Baghdad.

Another report about the economic empowerment of women in Iraq described the challenges and opportunities involving the integration of women in the Iraqi economy. The study was based on research conducted in 2011 by the United Nations Development Program in Iraq, in cooperation with the independent non-profit Iraqi Al-Amal Association.

The report said,  “The impediments standing in the way of women’s work stem from social discriminatory notions and radical religious motives, in addition to tribal norms.”

Ithar Issam, a materials engineer who works in a governmental company in Kut, south of Baghdad, told Al-Monitor, “The management of projects and fieldwork is usually not assigned to female engineers, even if there is an available vacancy. Usually, female engineers are only hired in administrative office positions.”

Issam said, “This phenomenon is caused by the stereotype that women cannot cross long distances and deal with workers and contractors. Security, maintenance and transport jobs that require effort or nightly shifts are still strictly reserved for men.”

However, Ibrahim’s resolve to change this image pushed her to participate in fieldwork in a project to build a bridge in her hometown, Kut.

According to the UNDP report, sexual harassment in the workplace is very worrying in Iraq. In the city of Sulaimaniyah in the Iraqi Kurdistan Region, 73.7% of women who were surveyed as part of the UNDP report noted that they have been sexually harassed, but only 12.3% of them remembered the details of the incident.

There are no regulations on sexual harassment in the workplace in the chapter on protection of women in the applicable 1987 Unified Iraqi Labor Law no. 71.

Maysoun al-Dimolji, a member of the Iraqiya List in parliament, said in a statement to BBC Arabic, “Some lawmakers verbally harass female MPs in order to force them to leave parliament.”

Cyran Hadi, a recruitment consultant in the city of Erbil in the Kurdistan region of Iraq, speaking to Al-Monitor via telephone, said, “Women have equal and even more opportunities than men. Yet, the society’s perception of women may sometimes limit their options, as some parents prefer their girls working in the government rather than the private sector. Moreover, some private companies prefer hiring men instead of women as they do not demand maternity leave or have child-care obligations.”

Janan Mubarak, head of the Iraqi Center for Women’s Rehabilitation and Employment (ICWRE), a non-governmental, non-political and non-profit organization, told Al-Monitor, “One of the biggest challenges facing Iraqi women at work is the spread of favoritism, especially in advanced administrative positions, because nominations to these posts are made by political parties.”

“Although articles 22 and 25 of the Iraqi Constitution of 2005 provided for equal rights and employment opportunities regardless of gender, there is no supportive legislation except for the quota system, which is only implemented in parliament and does not allow women to hold decision-making positions, which are controlled by political parties. Our center seeks to reach legislation regarding quotas for women in governmental positions” Mubarak added.

There are nearly 1.5 million widows in Iraq, only 8% of whom receive social security payments, amounting to approximately $80 a month, according to a report published by Oxfam (an international confederation of 17 organizations working to find lasting solutions to poverty and injustice) on Iraqi widows on the occasion of the International Widows’ Day that that took place on June 23, 2013.

The report on the economic empowerment of women indicated that parents try to alleviate the economic burden on poverty-stricken families  by marrying their daughters off early.

Noha Mohammed works at a public sector company in Baghdad. She told Al-Monitor, “There is a bright side to this distinction between men and woman. For instance, I am not berated in public if I have done something wrong, unlike my male colleagues. I can also easily have a day off.”

However, she complains about the dire security situation, which restricts her movement for fear of abduction and the harassment she faces in public transport.

Miriam Ali is a journalist who has worked with a number of Iraqi media outlets. She is an activist in the field of women's rights and has participated in a number of courses and workshops for promoting civil action.