As Egyptian women struggle to fight for their professional rights in the banking sector, the Faisal Islamic Bank of Egypt announced for the first time in 38 years that it was willing to employ women. 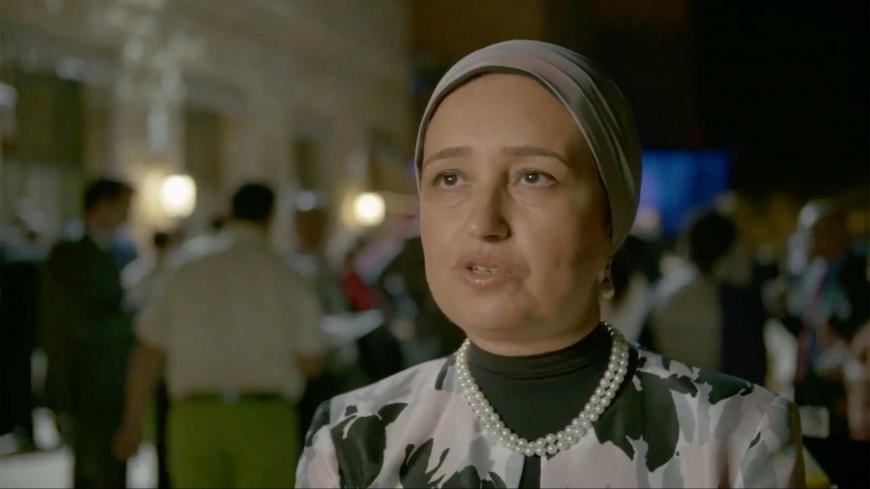 Lubna Hilal, pioneering female Egyptian banker and former deputy governor of the Central Bank of Egypt, seen in a still from a video filmed in Jordan and uploaded April 3, 2017. - YouTube/ GIZ - Financial Inclusion in the MENA Region

CAIRO — Ayah Azeb, a 26-year-old graduate of the Faculty of Commerce at Cairo University, is among several women to become employed Aug. 11 by the Faisal Islamic Bank of Egypt (FIBE) in Egypt.

FIBE announced July 31 that it will start appointing women to all of its branches for the first time since the bank was established in 1979 as the first Islamic bank in Egypt by the late Mohammed bin Faisal al-Saud, son of the late Saudi King Faisal bin Abdul Aziz Al Saud.

Azeb applied for a job at the bank after five years of working in different fields. She told Al-Monitor about the difficulties she faced in getting a job in the banking sector over the past five years. “I received a ‘Very Good’ assessment at the accounting department of the Faculty of Commerce where I studied. And I have received several training courses from various centers to further develop my skills. I applied to several banks but was never accepted, as banks tend to prefer males and believe they are more reliable and patient than females,” Azeb said.

During the interview at FIBE, Azeb said the questions were not gender discriminatory but rather were focused on her field of expertise.

“I dream of progressing in the banking sector like many women who have managed to overcome difficulties and reach high positions in the banking system,” she said, referring to Lubna Hilal, the first woman to be appointed as deputy governor of the Central Bank of Egypt.

Abdel Hamid Abu Moussa, the governor of FIBE, said in a press statement July 31 that the bank had for the first time approved the recruitment of females in all branches depending on the needs of each department. The announcement comes as the Egyptian state seeks to promote women’s rights.

Moussa added that the next couple of months would witness practical procedures for the selection of female candidates from among the applicants. He did not mention the number of applicants.

He further noted that the bank’s decision has nothing to do with Saudi Arabia’s latest campaign to end restrictions on women’s rights because the bank is Egyptian and operates in the local market.

When Al-Monitor asked Moussa about the reason behind the bank’s failure to appoint women over the past years, the bank’s governor did not respond. “This matter is subject to internal matters within the bank. We appreciate women, and they will be an important element [of the bank] in the coming years,” he said.

Egyptian member of parliament Inas Abdel Halim had submitted May 31 a briefing paper to then-Prime Minister Sherif Ismail about reports whereby “the FIBE does not employ women.” Abdel Halim stressed that the bank is violating Article 9 of the Egyptian Constitution, which stipulates that the state shall ensure equal opportunity for all citizens without discrimination.

She called on both the prime minister and the governor of the Central Bank to investigate the incident, “as it poses a great threat and is constitutionally and societally aberrant.”

Sahar el-Damaty, the first female vice president of Banque Misr — one of the largest Egyptian banks in the country — told Al-Monitor over the phone that women in Egypt occupy leadership positions within the banking sector, both in the public and private sectors, and there are no administrative restrictions on their promotions.

She said the FIBE and its relationship with its founders in Saudi Arabia is the main reason behind the strict rules relating to the appointment of women over the past years.

Damaty, who held high positions in foreign banks such as the Commercial International Bank, added that “the number of women working in the banking sector is low compared to other sectors. The reason behind such a low figure is that this sector is affected by religious fatwas, whereby working at regular banks [not Islamic banks] is sinful for both women and men.

She added that local banks in Egypt should follow the same policies followed by foreign banks in order to grant equal opportunities to both men and women, and efficiency should be the main criterion for promotion.

Damaty said that the recent positive step announced by the FIBE comes as part of the major changes taking place in Saudi Arabia concerning the easing of restrictions on women.

According to figures on government workers in 2016-2017 published by the Central Agency for Public Mobilization and Statistics, the percentage of women employed in the financial and economic sector reached 29.8% of the total number of working women in Egypt. In turn, working women in general account for 22.9% of the total labor force in Egypt.

It seems the FIBE decision falls within a series of societal changes both in Egypt and Saudi Arabia aimed at granting women their full rights.