In addition to improved education and workers' rights, a shift in workplace culture will be required for Egypt to harness the full potential of women in its economy. 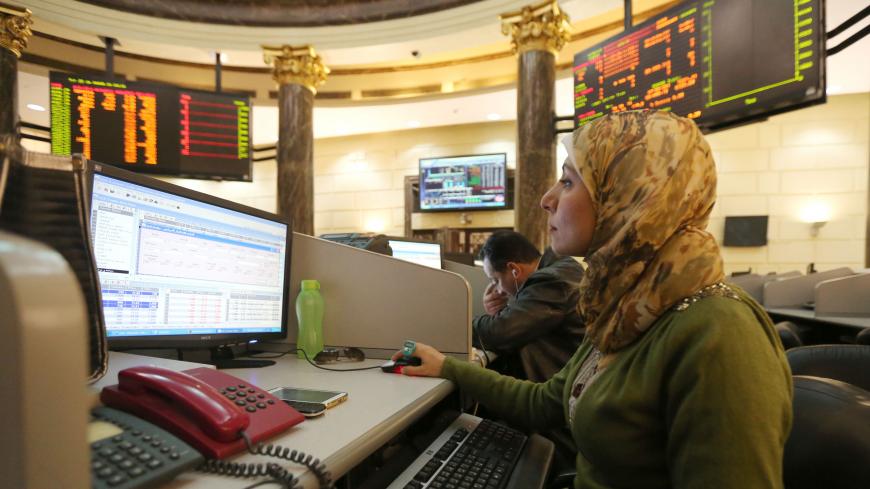 CAIRO — Salma Yusri says she suffers from discrimination in the workplace because she is a woman.

“The major problem is that there is little appreciation for my work even though they know that I’m very dedicated,” she told Al-Monitor. “Men always get promoted at the expense of the career progression of women.”

Though she is generally well treated by her employer — a major state-owned company she didn’t wish to name — Yusri, in her late 30s, said that she has to continually defend her standing.

“The administration and our managers constantly change so for each new guy we [women] have to prove ourselves. They don’t keep files on their employees and don’t have the same standards as many big companies,” she explained.

Yusri complained that men in the company are often sent on six-month training trips abroad to develop their careers, while women are rarely given similar opportunities.

“Sometimes they try to satisfy us with some extra holiday hours. Sometimes managers treat us well, sometimes not,” she said.

Despite the unequal treatment, she said she fares better than many working women in Egypt and is glad to have a job in a country where female labor participation rates are low.

If women achieved participation rates in the labor force equal to men, the income of families in Egypt would increase by at least 25%, according to comments by Egypt’s Minister of Planning Hala el-Saied.

Ghada Barsoum, associate professor in the Public Policy and Administration Department at the American University in Cairo, explained that looking at unemployment might not be an appropriate indicator in Egypt, pointing toward labor force participation rates as more accurate. Unemployment figures fail to take into account people who are not looking for work, while labor force participation rates, on the other hand, include data on those who have given up looking for work or have never sought employment.

“Actually, there is research suggesting that unemployment is not an indicator that you should take in mind for countries in Africa,” Barsoum told Al-Monitor, pointing to a high rate of informal work.

Egypt’s 2016 agreement with the International Monetary Fund for a $12 billion loan over three years required radical structural reforms in Egypt to curb public debt that led to downsizing in the public workforce. Educated women, who have for decades gravitated toward the public sector due to its security, safety and hours suitable for family life, were the worst affected.

Despite the Egyptian government’s efforts to increase private sector employment, there has not been a significant shift in women workers to this area.

Luca Fedi, an employment specialist at the International Labor Organization in Cairo, explained to Al-Monitor that there has been a major degradation in working conditions in Egypt. Since 2014, participation by women in the sector has been halved.

“When you work in the informal sector, key rights are most likely not upheld. Things like working hours are essential for women to be able to reconcile the heavy household duties that are expected from women with a professional life,” Fedi told Al-Monitor.

“Women, particularly educated ones, who were once joining the labor market in the public sector, are unable to work because obviously they are not able to reconcile or balance their family life with their professional life,” Fedi explained.

Due to the high prevalence of sexual harassment in Egypt, including in the workplace, women often demand specific work conditions.

“They have to be in safe spaces,” argued Barsoum. “Especially young women require specific working conditions other than pay and working hours.” It also means that the informal workforce in Egypt, which accounts for around 50% of Egypt’s economy and about 10 million workers, is often not suitable for women.

“Support for small and micro enterprises is definitely on the right track; you cannot limit your support to large enterprises because they’re not the main creators of jobs,” Barsoum said. “An increase in social spending by any means supports women.”

She also argued that employment programs that train job skills, while helpful on a small scale, simply aren’t widespread enough in Egypt to make a significant dent in workforce participation.

The IMF reported in October that women’s low participation in the workforce in Egypt and other countries in the region represents a “huge untapped resource” and that major investments in education and health services are needed to unlock it. But in addition to improved education and working rights, a shift in workplace culture will be required for Egypt to harness the full economic potential of women.

A toxic workplace culture pushed Hadeer Sherif out of a private sector job into work at a small childcare center in the informal sector for less pay.

“I was treated badly in my previous job and I hated the work,” she told Al-Monitor. “My rights weren’t respected so I decided to find something that I actually liked even if it paid less.”