In a bid to help women overcome the bitter situation plaguing the work environment, the Palestinian Ministry of Labor, in cooperation with the International Labor Organization, recently issued a guideline for the rights of working women in Palestine. 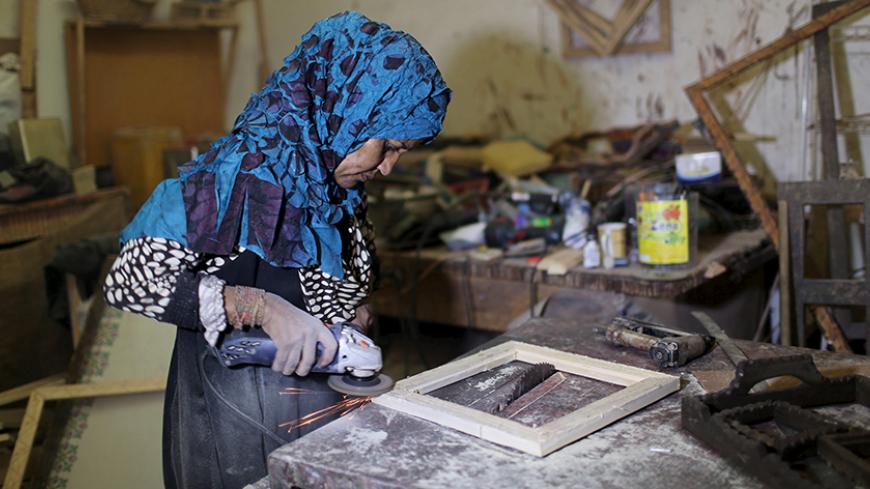 GAZA CITY, Gaza Strip — The work environment in Palestine suffers from violations of labor rights in general and women’s rights specifically, as women are the weakest entity in their patriarchal society. Consequently, the Palestinian Ministry of Labor and the National Committee for Women’s Employment (NCWE) coordinated with the Palestinian General Federation of Trade Unions (PGFTU), with the support of the International Labor Organization, to launch the first Guideline for Women’s Employment Rights on Oct. 4 in Ramallah.

The guideline took six months to complete, and it aims at instilling equality and social justice, eliminating gender-based discrimination at the workplace, improving the work environment and raising women’s awareness of their rights.

NCWE coordinator and head of the Gender Unit at the Ministry of Labor in Ramallah Iman Assaf told Al-Monitor that the guideline was the result of the ministry’s inclination to increase working women’s awareness of their rights.

Many of the women are not well-informed of the Palestinian Labor Law and the issued laws related to their rights and duties. Consequently, they keep mum about their employers’ violations, such as depriving them of leaves and increasing their work hours without paying them overtime.

The ministry is also seeking to increase women’s employment in the Palestinian labor market. Assaf said, “According to the Palestinian Central Bureau of Statistics, women’s participation in the labor market reached 19.1% in 2014 and increased to 19.4% in 2015. Unemployment among literate women reached 84% [in 2013], a figure that does not reflect Palestinian women’s ambition and their desire to join the job market.”

She added, “The service and agricultural sectors are considered the main fields employing women, and they constitute 62.9% and 13% [according to the abovementioned 2013 statistics], respectively, out of the total female workforce.”

Assaf blamed the spread of unemployment among women on the Israeli occupation, which erects checkpoints between cities in the West Bank, thus undermining Palestinians’ movements, the marginalization of Palestinian women, their isolation in some remote areas and discrimination between the two genders in employment. In addition, the quality of university education women receive is sometimes not in line with the job market requirements.

The guideline was issued in two versions. The first is a simplified version in which the rights and duties of employed women are stated in a graphic and colorful way to promote them among women who do not have a high educational level. The second version is more detailed and includes three parts: the international authorities related to working women’s rights, national laws and authorities, and challenges for women in the workplace. The two versions were coupled with an address book containing the numbers of relevant authorities that offer help for women.

Assaf noted that the laws in the guideline comply with the 2000 Palestinian Labor Law No. 7, the 2012 Minimum Wage Law ($370/month) and the 2016 Social Security Law No. 6, which guaranteed working women in the private and public sectors the right to a social security paid maternity leave.

Assaf expects female employment to increase when the Social Security Law is implemented at the end of October, because the employer won’t have to pay maternity leave expenses — which will be paid by the social security fund. Many employers refuse to employ women due to the likelihood of pregnancy and the subsequent financial burden on the company.

Assaf said, “We will work in the coming phase on promoting the guideline through workshops and forums with women and employers and through media interviews to explain and clarify it to society.”

Assaf noted that the laws and guideline should be implemented in all areas under the Palestinian Authority’s control and in the Gaza Strip. She admitted, though, that the economic situation, the Israeli blockade and the Palestinian internal rift might prevent this implementation.

PGFTU Secretary Hussein al-Faqhaa told Al-Monitor that the official figures and the field visits of the federation to companies indicate that employed women in Palestine face many violations related to their salary and working hours. Therefore, the guideline was essential to raise awareness of their rights, especially for women working in the agricultural sector, which often lacks professional safety and health standards.

Faqhaa noted that the absence of the executive authorities’ role in periodically following up on the labor law’s implementation, the divisions plaguing labor unions and the lack of law awareness have directly contributed to creating a bitter reality for working women, especially in marginalized and remote areas.

Faqhaa added that awareness and development are gradual rather than immediate, especially with the spreading unemployment and poverty in Palestine. He said that this does not stand in the way of awareness, though, and indicated that the situation needs a comprehensive and sustainable development plan.

Safaa Abed, the deputy head of the Palestinian Women Struggle Committee Union, highlighted the need to distribute the guideline to all organizations rather than just publish it. The publication phase should be followed by promotion and awareness and should bind the employers to implementing the law.

Abed indicated that women are afraid of asking for their rights out of fear of losing their jobs, especially with the slackening of executive authorities. She underlined the importance of protecting women legally. She said, “Although the Minimum Wage Law was passed three years ago, many organizations are not implementing it. Women have to endure this situation due to the lack of alternatives and legal accountability for the noncompliant employers.”

Rima Nazzal, member of the General Secretariat of the General Union of Palestinian Women, said that the simplicity of the guideline is central in its function of raising awareness. She added that it is a pillar for educating women, expanding their awareness of their rights and highlighting their priorities.

The implementation of the guideline might be a precursor to raising employed Palestinian women’s awareness of rights that their employers violate. But respecting those rights depends on the extent to which executive authorities are willing to apply them on various organizations, especially in remote areas.