The Tunisian draft law on the elimination of all forms of violence against women has tightened sanctions against abusers, but it remains to be seen whether this law will be passed in parliament with or without amendments. 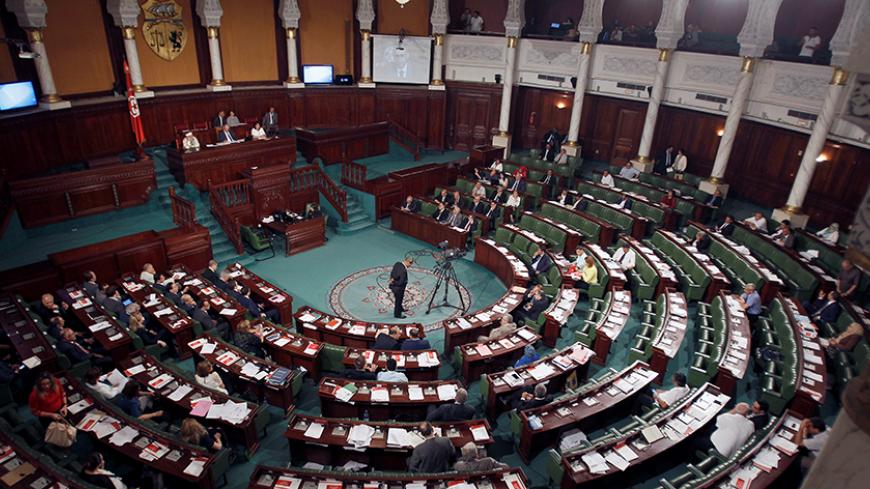 A general view during a plenary session at the Assembly of People's Representatives in Tunis, Tunisia, July 30, 2016. - REUTERS/Zoubeir Souissi

Tunisia’s Ministry of Women’s Affairs submitted to parliament in mid-July a new draft law on the elimination of violence against women. Article 2 of the draft law extends to “all forms of gender-based violence directed against women by any perpetrator, whatever form it takes, without discrimination on the basis of birth, color, race, religion, thought, age, nationality, socio-economic conditions, civil status, health, language or disability.”

Under the draft law, punishment may extend to two years of imprisonment with a fine of 5,000 Tunisian dinars (roughly $2,300) against perpetrators of sexual harassment crimes. Article 16 of the draft law stipulates, “Whoever harasses women in a public place, be it through verbal or nonverbal behavior, or remarks that would offend them, shall be imprisoned for one year.”

The draft law has caused a wave of sarcasm on social media with people posting pictures and jokes on what might happen after the law is passed. Some joked that a simple look or smile at a woman on the street may lead the man to jail, while others posted a sarcastic picture of a baby who looked at a women before ending up in a correctional facility.

The new articles of this bill have tightened sanctions against the perpetrators of violence and harassment acts against women, compared to the Tunisian Penal Code's provisions in force. Some of these provisions will be abolished under the bill in case it is ratified by parliament, such as Article 266 of the Penal Code that stipulates that sexual harassment crimes are punishable with a year of imprisonment and a fine of 3,000 dinars ($1,350).

The tight sanctions came in light of the alarming figures in regard to violence against women in Tunisia.

The new bill defines violence against women as “any gender-based physical, mental, sexual or economic [abusive] act against women, causing them physical, psychological, sexual or economic harm, including the threat of resorting to such acts, exerting pressure on them or denying them their rights and freedoms, whether in public life or in private.”

The controversy and sarcasm — which were centered on the tightened sanctions for harassment crimes — overshadowed the fact that the law is a big push for women to have access to advanced social and economic posts, by promoting gender equality and criminalizing all types of discrimination.

Article 3 of the draft law criminalizes economic abuse and defines it as “any action or abstinence from acting that would deprive women of economic resources, such as depriving them of money, income or vital needs, controlling their wages or income, and prohibiting or forcing them to work.” The same article also criminalizes “any distinction, exclusion or restriction denying women their human rights and freedoms on the basis of equality in the civil, political, economic, social and cultural domains.”

Women in Tunisia have faced great difficulties in the employment domain, as they have suffered from wage discrimination and have been paid less than men for doing the same work, especially in the private sector. Article 11 of the Public Employment Law of 1983 regulating jobs in the public sector prohibits any form of discrimination between men and women.

Law expert Mazen Korshide told Al-Monitor, "The Labor Code regulates employment in the private sector. Article 5 of said law prohibits any gender-based discrimination in general. Yet it does not clearly specify that men and women should receive equal pay. The law remains a theoretical text, which explains why some institutions violate laws and pay women less than men.”

A study published in March on the violation of women’s rights in the private agricultural sector, which was conducted by the Tunisian Association for Cultural Action, revealed that 99% of women do not receive equal pay as men for doing the same job. The study focused on Sidi Bouzid, in central Tunisia, and revealed that the economic and social rights of women working in the agricultural sector there are being violated.

According to the same study, 36% of participating women who work in the agriculture sector said that their job poses a risk to their health due to the exposure to sunlight, and that they were subjected to sexual harassment in the workplace. Such discrimination is contrary to Article 20 of the 2014 constitution, which stipulates that “citizens, male and female, have equal rights and duties, and are equal before the law without any discrimination.”

Article 46 of the constitution states, “The state is committed to protect women’s accrued rights and work to strengthen and develop those rights. The state guarantees the equality of opportunities between women and men to have access to all levels of responsibility in all domains.” In 2014, Tunisia ratified the Convention on the Elimination of all Forms of Discrimination Against Women.

Nevertheless, the challenge facing the draft law once ratified by parliament is to what extent the legal text will help improve the status of women in reality, especially those new articles criminalizing harassment and violent crimes and prohibiting any form of discrimination against women in the workplace.

For her part, activist Fatma Riahi told Al-Monitor, “When reporting crimes of violence and sexual harassment, women will face family, social and even police pressure. Unfortunately in many cases victims are viewed as guilty and responsible for the harassment they were subjected to, because of the way they are dressed or the way they conduct themselves. Many victims choose not to resort to the judiciary out of fear of being placed under such pressure. This is why awareness of their rights should be raised so as to prompt victims to unveil such crimes, because silence, warding off the scandals and impunity come to the advantage of the perpetrators of violence and harassment crimes.”

Many laws and government actions in Tunisia are not in line with the 2014 constitution, and so this requires the ratification of laws guaranteeing gender equality in the various fields and preventing discrimination against women. For instance, women and men do not have an equal share in inheritance, as a man equals two women under Tunisia's Personal Status Code. Despite the feminists’ calls to amend these laws, the legislative branch is preoccupied with the vote of confidence on the new government, countering terrorism and addressing the economic crisis.