Iranian President Hassan Rouhani has appointed women to his cabinet, but his administration must do a lot more to address discrimination against women in Iran. 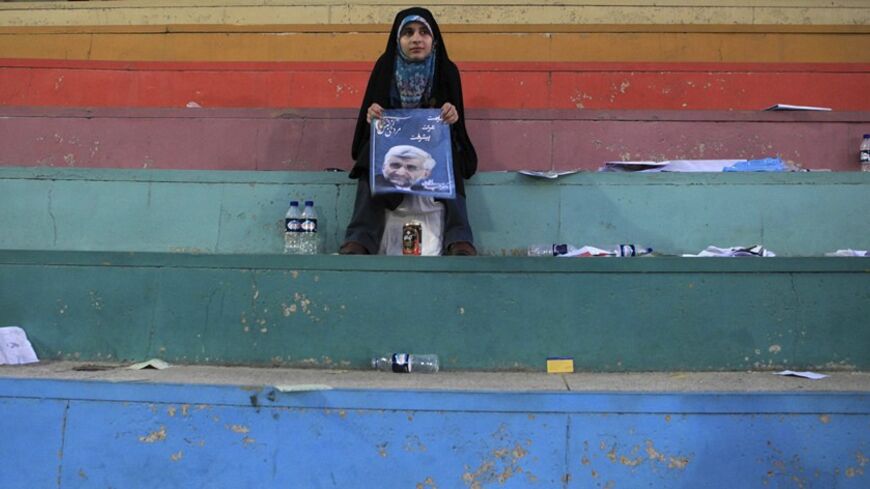 A female supporter of Iranian then-presidential candidate Saeed Jalili holds his picture after a rally in Tehran, June 12, 2013. - REUTERS/Yalda Moayeri

For the first time in five years, a permit had been issued in Tehran allowing people to celebrate International Women’s Day on March 8. Women's rights activists want to use this opportunity to celebrate this day and bring forth their demands in public.

In recent months, two women were chosen as governors and one woman was elected as mayor of a city in the provinces of Sistan and Baluchestan. There has also been news about Elaheh Koulaei and the possibility of her becoming the next chancellor of Tehran University. Prior to the elections, President Hassan Rouhani promised to create equal opportunities for women and men in the workplace and in managerial positions. He said, “Discrimination against women is unacceptable to us. Gender cannot be a suitable criteria for assigning responsibility. Women should be equally involved in decision-making.” He asked for health insurance to be extended to cover those women who are sole guardians of their families, and he had also opposed the proposal to introduce gender segregation in universities.

A women rights activist in Tehran said to Al-Monitor, “Because of the new administration, a lot of women rights activists have restarted their activities and are optimistic. The most important change is that the female activists are now hopeful. Choosing Shahindokht Molaverdi as a vice president in the administration was very important. Molaverdi has always worked alongside civil activists and knows about their problems.”

She added that recently the State Welfare Organization and the National Youth Organization have made it easier for private organizations to obtain permits. These organizations can be active in areas such as social deviance, domestic violence, rape and prostitution. Also, this year, groups such as the Iranian Mothers for Peace, the Civil Rights Association, the Board of Trustees of the Sediqeh Dowlatabadi Library as well as labor activists organized events to celebrate International Women’s Day.

Farideh Ghaeb who is a journalist working on women’s issues in Iran said to Al-Monitor, “During the election campaigns, time and again Rouhani talked about creating equal opportunities for women. But has he delivered on his promises? To answer this question I only mention one thing: the Comprehensive Population and Family Excellence Plan, a plan that claims it wants to improve family life in Iran. What role is allocated to women in this plan?

Article 4 of this plan emphasizes that a woman’s primary role is to be a mother and any social or work-related activities undertaken by women should aim to strengthen this role.

Article 24 of this plan proposes nine months of maternity leave for women, while new fathers will be allowed to take only 10 days off and only for the purpose of supporting the mother. It gives the impression that caring for children is solely the woman's responsibility.

Article 9 is about employment, and it emphasizes — in accordance with plans to increase the rate of marriage and childbearing — that priority should be given to married men who have children, then to married men without children and finally to women with children. This article mentions that single persons can only be hired if there are no qualified married candidates for the position.

When I read this new plan, all I can think of is the ruling authorities are trying very hard to make women passive and prevent them from being active in society, in education and in the workforce. This is a power-oriented view that tries to make women inferior and opposes social justice and gender equality. There are no positive steps taken by the new administration either. Mr. President is going back on his word.”

Jila Baniyaghoob, a journalist in Iran and recipient of the Courage in Journalism Award, was recently released after serving one year in prison, but was ordered by the court not to take part in any journalism activities for the next 30 years. After being released, she wrote a book titled Women of Evin: Ward 209, which has recently been translated into English. In her book, which includes her memories from Evin Prison, she observes women rights activists who were serving their prison sentences. So many of her fellow prisoners were sentenced to prison time because of their feminist activities. She also discusses women movements in other sections of her book.

In an interview with Al-Monitor she said that although Rouhani and members of his administration have a more positive view regarding women compared to former President Mahmoud Ahmadinejad and his team, there have not been any significant changes in women-related issues since the new administration took over. Nonetheless, appointing Molaverdi was a positive step.

“In Iran, the missing link of the women’s movement is financial independence,” Baniyaghoob said. “Unfortunately, female activists are yet to pay proper attention to this issue. The truth is, however, that until women are financially independent, gaining equal rights would be very difficult for them. Even if laws change in favor of women, the problem will not be solved. … A woman who is a victim of domestic violence will not ask for a divorce if she doesn't have a job, even if she does have the legal right to divorce her husband. Naturally, she wonders how she should provide for herself after the divorce.”

Baniyaghoob believes that the administration should support women in their quest for financial independence. During Ahmadinejad’s presidency certain laws were passed that made employment problematic for women. The administration claimed that the new laws were meant to support women, and that we want women to work fewer hours and spend more time with their families. But these laws only had negative effects according Baniyaghoob. “With the new laws, the employers were certain to hire only men, because why would they hire someone who had to leave work at a certain time of the day and yet pay them the same salary?” she said.

During the Ahmadinejad administration, many women studies programs were banned and women were restricted from pursuing certain university degrees.

Despite the hiring of women in the new administration, Baniyaghoob said, "They are not enough.” She added that there are many more issues.

“Domestic abuse is one of the biggest problems faced by women,” she said. “According to national research, domestic abuse has increased. These abuses are not always physical, they could be verbal or it could be a husband preventing his wife from seeking employment. Our laws are problematic when it comes to these issues. Even if the law does support the woman, the process of taking the case to court and the follow-up is so difficult that most women who are abused decide not to file a complaint.”

In our discussion, Baniyaghoob said that one of the problems in addressing these issues is that when women organize and become active, the government treats women’s problems as if they are security issues and concerns, and constantly clash with writers who cover women’s issues.