What's so special about a Jewish prenup?

More and more ultra-Orthodox couples are signing prenuptial agreements, financially protecting women in case their husbands refuse to divorce them. 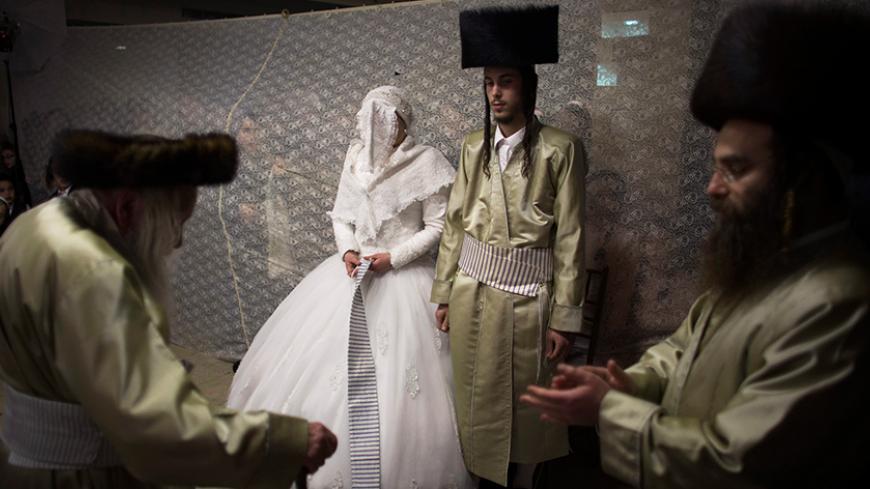 An ultra-Orthodox Jewish bride stands beside her groom after their traditional wedding ceremony in the Mea Shearim neighborhood of Jerusalem, Feb. 18, 2014. - REUTERS/Ronen Zvulun

The religious community in Israel these days is in an uproar over certain “prenuptial agreements” initiated by the Rabbinical Council of America and adopted by the moderate Israeli rabbinic group Tzohar. The issue involves an agreement signed by the couple before their marriage, in which the man obligates himself to pay a high alimony ($50-$150 per day) to his wife if she wants a divorce and he refuses to give her a get (a Jewish bill of divorce).

While various women’s groups have expressed enthusiastic support for the initiative and various rabbis allow it, many authorities in Jewish law — particularly among the Orthodox — fervently oppose the proposal. The reason for this is the concern that in Jewish law, or halacha, this could be considered a “forced get.” Jewish law does not accept the divorce of a man who is forced to give his wife a get, and the couple is considered still married. Supporters of the prenuptial initiative believe that financial pressure is not considered “force.”

There is no civil marriage in Israel, and Jews can only be married in accordance with Jewish law. According to Jewish law, men and women cannot break up their marriage unless both parties agree to it. Under that same law, however, the status of women is inferior to men. The children of a woman born to another man — before that woman received a get from her husband — are considered mamzerim (bastards), with certain religious implications, especially when getting married. In contrast, the children of a married man born to an unmarried woman who is not his wife do not have the status of mamzerim.

Men deny their wives a get for various reasons: out of revenge, a desire to improve their position in the division of assets or to get better parental visitation rights. This is precisely the problem that the prenuptial agreement attempts to resolve.

In Jewish law, there is the possibility of forcing the husband to give his wife a get by sentencing him to prison, for example, though in practice, religious courts use this option very rarely and only in extreme cases. “Clearly forcing a man to divorce his wife is very problematic from a halachic perspective,” Rabbi Avraham Stav from Tzohar told Al-Monitor.

Rabbi Eliyahu Schlesinger, the head of a religious court and chief rabbi of Jerusalem’s Gilo neighborhood, is convinced that the religious prenuptial is a sophisticated means of forcing the husband to divorce his wife and is therefore forbidden. “When you present a man with the financial obligation to pay $150 a day if he doesn’t agree to give his wife a get, that meets the definition of 'forced get' as far as halacha is concerned,” he told Al-Monitor.

He added, “According to the agreement proposed today, a woman has the right to sue for the payment of the fine even in a situation in which the breakup of the marriage was entirely her fault, but the religious court does not grant her the terms for the divorce that she is demanding.”

The prenuptial initiative defines "delaying a bill of divorce" as a period of six months — from the moment that one of the parties asked to divorce. According to the halacha, a get recalcitrant is a man who refuses to comply with the court order to divorce his wife (for reasons of violence or adultery).

Actually, Tzohar rabbis were not the first to introduce a financial dimension into the Jewish divorce mechanism. The Jewish ketubah (Jewish marriage contract) already includes two sets of financial obligations imposed on the man: the fees paid according to the divorce bill once divorced and alimonies to the wife as long as they are still married, even if the couple is separated. This obligation is somehow similar to the daily fine imposed on the recalcitrant husband in the new prenuptial agreement. Stav claims that this point exactly serves as a basis to prove that the daily fine of the prenuptial Jewish agreement does not contradict the Jewish law and should not be considered as forcing the husband into divorce.

Schlesinger said that the problematic point is the issue of intent. The alimonies and the bill of divorce fees originate in the intent to provide the woman with financial means to survive, not to force a divorce. The fine initiative is designed as a means to pressure the husband into a divorce — a pressure prohibited by Jewish law.

Despite rabbinic opposition, the prenuptial agreement is spreading. Many people in the religious community (and even married couples) sign an agreement of this sort before they get married. Tzohar calls these agreements “an agreement out of love,” claiming that more than 50,000 people have signed them to date.

Ran Khoury, 30, defines himself as a “social activist on behalf of responsible joint parenting.” He opposes the agreement in its current format, but not for halachic reasons. “The status of the man in the balance of power that exists in the current partnering structure is inferior to that of the woman. There is the ketubah, which he has to pay; there is alimony for the woman, which is the man’s responsibility until he gives his wife a get, even if the woman can support herself financially; and there is child support, which falls solely on the man. And we must not forget that he could also be denied a get. None of these agreements show a genuine desire to resolve the problem of gender-based extortion in marriage. It is simply a focused solution for one specific problem: men’s refusal to give their wives a get. I support a holistic solution that deals with extortion in divorce in general, by women as well as by men.”

According to Khoury and other activists, the possibility of “anchoring” a wife — by refusing to give her the bill of divorce — is the last chance that men have to improve their standing when confronting their ex-wives, and “this means should not be taken away from them.”

Hadar Drott, 26, from Givat Shmuel signed the prenuptial agreement when she got married recently. She told Al-Monitor that she and her partner decided to sign a prenuptial agreement since they realized that denying a woman a divorce is the greatest injustice that Jewish women suffer from and fear today. “The greatest injustice in marriage is the man’s option to 'anchor' his wife. It is an option reserved solely for the man.”

Drott said, “Men have the ability to put their wives’ lives on hold, to keep them from starting a new chapter in their lives and from having children. A man can ruin his wife’s life. This injustice should be dismantled, regardless of any other injustices that — if they exist — should also be handled.” Drott said that on some level, her signing the agreement was a statement. “At this stage, especially, when we are totally in love, we recognized that we don't want to cause any suffering to each other if the whole thing falls apart,” she added.

Many men and women in Israel feel that the Jewish divorce mechanism is unfair to them, because it obligates the man to pay child support or because the man can make his wife’s life miserable forever by refusing to grant her a divorce. Regardless of their positions, it now seems that practically everyone involved in the issue, whether it is women’s groups, men’s groups, rabbinic courts or the general public is in agreement that the old, accepted norms should be re-examined and discussed.